On a quest for images of some of Earth's rarest primates, two wildlife photographers journey to the remote island of Madagascar

FOR NEARLY TWO weeks, Pete Oxford and Reneé Bish had hiked Madagascar's Marojejy National Park searching for the silky sifaka, a rare, all-white primate. Undaunted by rugged rain-forest terrain and the bloated leeches that clung to their legs, the photographers nonetheless grew discouraged as day after day they failed to locate their quarry. "Finally, on our twelfth day in the forest, I heard a dull thud behind me," remembers Oxford. "I turned slowly as the ghostlike sifaka leapt onto a nearby branch to inspect us. The terrain was slippery and steep, and the animal bounced from one branch to the next as I bushwacked for position. A few grab shots was all I got in the few minutes before it disappeared." 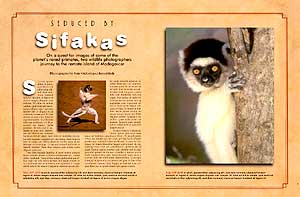 A member of the group of primates known as lemurs, the silky sifaka is one of nine known sifaka taxa (species or subspecies), all of them rare and found only on the island of Madagascar. It also was the last sifaka Oxford and Bish needed to complete a quest to photograph all of these lemurs in the wild. 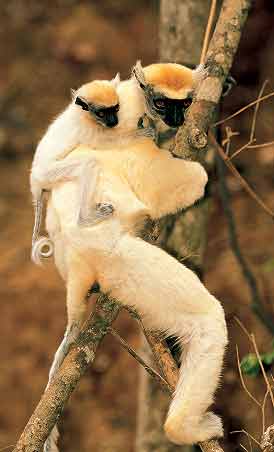 GOLDEN-CROWNED SIFAKA: One of the most endangered sifakas, and the one with the smallest range, the golden-crowned is among the world's rarest primates. "To find them," says photographer Pete Oxford, "we hiked nearly three hours in open and scorched terrain." He and Reneé Bish finally spotted this mother and baby "at the edge of a small forest patch full of gold miners."

The photographers' mission may have been unusual, but their passion for sifakas is shared by others--even some Madagascar natives who might just as easily consider the charismatic animals a source of much-needed protein. Throughout the island, many ethnic groups consider it fady, or taboo, to kill any kind of lemur. Russell Mittermeier, president of Conservation International and chairman of the IUCN/Species Survival Commission Primate Specialist Group, recalls visiting Daraina, Madagascar, a few years ago, where "gold miners were living in miserable conditions on the verge of starvation." Yet every afternoon, he says, golden-crowned sifakas "would come bouncing into camp to be fed bananas by the miners."

Despite such high regard, sifakas are in trouble. Specific dangers to each taxon vary, but the most serious threats are habitat loss due to shifting cultivation and livestock rearing, gold and sapphire mining and hunting. Oxford and Bish hope the animals' popularity may still save them--as well as the beleaguered ecosystems they inhabit. More than 90 percent of Madagascar's forests and other native vegetation already has been lost. Because sifakas occupy nearly the entire range of what's left of these habitats, from spiny desert to tropical rain forest, the animals are "perfect ‘flagship' species to attract conservation and ecotourist dollars," says Oxford.

Soon a new sifaka may join the family tree. After Oxford and Bish returned from Madagascar, they heard that researchers from the Duke University Primate Center had discovered what they believe is a new subspecies. Though the finding remains undescribed scientifically, Oxford hopes for "an excuse to return to the island on an unfinished photographic quest."

COQUEREL'S SIFAKA:Though endangered, Coquerel's is one of the easiest sifakas to find. One group often slumps lazily over the bough of a mango tree at the Ampijoroa Forest Station. Like all sifakas, Coquerel's is diurnal and very social. The animals travel together in family groups and spend much of their time interacting, particularly grooming one another.

What is now the nation of Madagascar broke off from mainland Africa more than 120 million years ago, isolating the island's plants and animals and spawning the evolution of organisms found nowhere else on Earth. Like most of the island's endemic creatures, sifakas are rare and have restricted ranges.