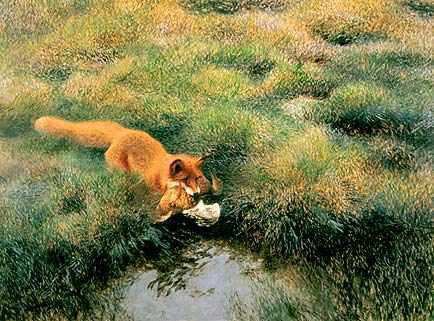 SITTING DUCK: A classic example of Liljefors' recurring predator and prey theme, Fox and Duck (above) illustrates the outcome of an encounter between a fox and its unfortunate prey. As an avid outdoorsman, Liljefors was familiar with the Darwinian struggle for survival that animals face daily, and he chose to portray these life and death interactions realistically. Although the animals appear small in the landscape, the painting's focus is on the fox as it moves through the grass.

BRUNO LILJEFORS' MODEST REMARK may go down in the annals of wildlife art as the understatement of all time: "I paint animal portraits," he said in 1902.

Liljefors, a Swedish artist who lived from 1860 to 1939, did indeed paint animal portraits. But what portraits! His works combined an appreciation for biological and ecological principles with a mastery of realistic impressionism, setting a new standard for wildlife art. "I would say that he is the greatest wildlife painter," says Martha Hill, author of a biography that celebrates Liljefors' artistry. "He went beyond science and created great pieces of art."

The road to becoming a celebrated painter who could tie the constraints of science to the unfettered possibilities of art began inauspiciously. Sickly as a child, Liljefors spent many of his early years indoors, where he was introduced to painting by his tutor at age six. As he matured, he built up his strength with gymnastics, outdoor exploration and hunting, but he never lost his passion for brushes and paint.

These early experiences in nature provided Liljefors with an intimate knowledge of land, wildlife and the relationships between the two. "He was not only interested in animals, but in total environments and the interplay of animals and nature," says Allan Ellenius, professor emeritus of art history at Uppsala University. 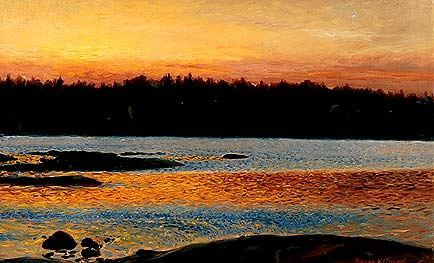 IMPRESSIONIST RAINBOW: Although Liljefors is best known for his wildlife paintings, he also produced human portraits and landscapes such as Morning (above). The influence of the Impressionists is evident here in his use of color, light and long brushstrokes. Bands of light from the sun and its reflection on the water's surface create a horizontal color spectrum across the canvas. Liljefors didn't depict each detail of the scene; however, the overall effect is breathtaking.

Such knowledge of the natural world formed a basis for the painter's works throughout his career and translated impeccably on each of his canvasses. After observing animals in their natural habitats, Liljefors could accurately convey with his paintbrush their behavior, anatomy and relationship with the environment. "You can tell that he lived with animals and spent a lot of time observing them in the wild," says Diane Jones, former curator of the Genesee Country Museum in Mumford, New York.

At age 22, Liljefors left the Royal Academy of Art in Stockholm, where he had matriculated for formal training, to travel and study art throughout Europe. He eventually arrived in Paris, where he was introduced to the light, color and brushwork characteristic of the Impressionists. Their influence is particularly apparent in his landscape painting Morning. During this period, Japanese prints were also popular and their nature themes and fresh, bird's-eye-view perspectives appealed to Liljefors.

ARTIST HIMSELF: Dressed in shades of brown and green, Liljefors blends well with his surroundings in Self-Portrait. Although the artist lived elsewhere at the time, he chose to paint himself in the Swedish countryside where he grew up and was first introduced to nature.

Although influenced by Impressionism, Liljefors never attributed any one style to his paintings. "His overall concern was to make as vivid a portrait of the animal in its environment as possible," says Hill. "He was intrigued even by the smallest detail."

Liljefors' painting style evolved as he matured as an artist. Although the details and mechanics of nature--the movement of wings in flight, for instance--appealed to him, he managed to capture their essence without transcription of each feather. His later works were more Impressionistic than his earlier ones, but they never became abstract.

Unlike most other wildlife artists of his time, Liljefors ventured into the field to paint his subjects under an array of conditions. The result is a portfolio of works that captures the scope, movement and energy of what he saw. "His paintings are very alive," says Hill. "There's nothing stuffed or dead about any of the animals."

This vitality is evident in Eiders on a Rock, which was painted from a telescopic perspective. The movement of a single female toward rippling water depicts a vibrant early-morning scenario. The work is considered one of Liljefors' masterpieces.

As an experienced outdoorsman, Liljefors understood and recognized the Darwinian struggle for survival among the animals he observed. Two themes that appear frequently in his works relate to this idea: the give and take between predator and prey, and camouflage.

Liljefors portrayed the predator and prey relationship with a variety of players and in various stages of the action. "His predator and prey interactions were in his estimation the most intense and dramatic event that an animal would encounter in its life," says Hill.

In Eagle and Hare, Liljefors depicted the mid-drama pursuit of hunter and hunted when it is not yet known whether the prey escapes or the predator wins. But in Fox and Duck, he illustrated the end result of the interaction: The fox is victorious. In other paintings, the predator is not present on the canvas, but it's clearly nearby. "Even in the absence of predators," says Ellenius, "you may be able to feel their presence lurking outside the frame."

ZOOM LENS: Considered one of Liljefors' most famous paintings, Eiders on a Rock captures the interplays between two seabird pairs and their environment on a spring morning. The telescopic point-of-view provides the effect of looking at the eiders through binoculars. Liljefors frequently viewed birds in this manner from the coast of his island home, where he transferred this perspective to the canvas of the acclaimed painting.

Liljefors demonstrated his understanding of the importance of animals blending into their environment in his treatment of camouflage. Shades of brown and green were intriguing, not dull, in his eyes. The first time Liljefors saw these colors in game birds' plumage, he later recalled, "My earlier notions of ugly and beautiful colors were turned upside down by these wonderful combinations which seemed to come from the gray predawn of history, and told of the forest, the marshland, the moss on the rocks, the night sky between branches."

Instead of focusing on the brighter, flashier species or the colorful male birds, Liljefors often painted less conspicuous species and female birds. An example is Partridge With Chicks. Though camouflage helps protect prey from discovery by predators, it also helps predators--and in Liljefors' case, hunter and human observer--to remain unnoticed. 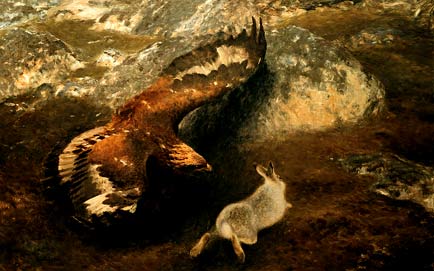 FINAL ACT: The predator and prey drama unfolds once again in Eagle and Hare, illustrating the moment during the chase when it is uncertain what will play out next. The eagle swoops toward the darting hare, yet two possible outcomes remain for the finale: The eagle either captures the hare or the hare escapes. Liljefors created a sense of movement and energy with his use of shadows, as well as with details such as the eagle's curved wing feathers and slightly open beak, and the hare's right eye as it searches for an escape outlet.

This notion is clearly evident in Liljefors' Self-Portrait. Dressed in subtle greens and browns and reclining in a field, he blends well with the landscape. Liljefors' depiction of himself in the countryside of his childhood illustrates his ease with his surroundings. "It's as honest of a self-portrait as you could ever get," says Hill.

In Liljefors' wildlife paintings, there's a sense that the animals are part of a larger, ecological whole. This perception can be traced to his early appreciation and understanding of animals and the habitats they live in. "Since childhood I have had a strong and unusual affinity for watching wild creatures as they appear in their environment, causing me to spend most of my time rendering them," wrote Liljefors in 1912. "What appeals to me is their expressive form, a picture of balance and perfection, and their organic connection to the surrounding terrain."

Sarah Boyle was formerly an associate editor of this magazine.