For many plants and animals on the Galapagos Islands, survival makes for some prickly partnerships

IMAGINE a newly emerged volcanic island lost in the Pacific Ocean many millions of years ago, lifeless except for a few passing seabirds. As the lava cools and weathers, a few seeds and hardy animals settle down to make a new home on this virgin speck of land. Some of the first to take hold are desert cacti, their seeds delivered by vagrant birds. As they grow and spread, the cacti eventually provide shelter for the first resident land birds and food for a few reptiles accidentally washed ashore. 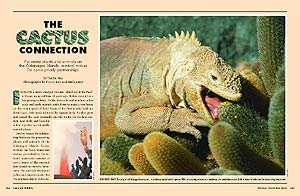 And so began the relationship between the pioneering plants and animals of the Galapagos Islands. Today, without the food, water and shelter provided by the islands' numerous varieties of cacti, many of the animals here would not survive. In return, the animals transport pollen and disperse seeds. But the partnership is delicate, and to survive both have developed some canny tricks.

For example, to foil long-legged saddleback tortoises, which can browse twice as high as their squat cousins, the usually shrubby prickly pear cactus will grow into a smooth-trunked, 40-foot giant on certain islands. So fond are saddlebacks of the juicy pulp in cactus pads and trunks--their only source of water during long droughts--that they would soon exterminate the plants with their sharp jaws if they could. So these cacti have retaliated in another way: Their trunks have taken on a buttressed shape, protected by hard, flaky bark, forcing the giant reptiles to instead rely on them for shade and content themselves with eating fallen fruits and pads.

PRICKLY PAD: With an erupting volcano as a backdrop, the candelabra cactus (above) is home to birds and the insects they love to eat.

Equally dependent on what falls from the cacti--especially the juicy green fruits--are land iguanas, yellowish dragons on short legs. Since neither tortoises nor iguanas chew their food, the cactus seeds can safely travel inside the reptiles' stomachs, often deposited far from the parent plants, to places where new growing opportunities may exist.

On Galapago's islands where neither of these terrestrial reptiles are found, the prickly pear cacti have lost all their defenses. They grow no trunks at all, simply sprawling along the ground in dense clumps. What's more, the spiny armor on their pads has been replaced with soft, fuzzy bristles. So inoffensive are these hairlike excuses for spines that frigate birds favor their rigid, clustering pads as nesting sites, where courting males may sit with delicate throat sacs fully inflated. In return, seabirds reward the plants with a steady supply of guano fertilizer.

These low-growing cacti also don't produce large, juicy fruit, since the tortoise and iguana transport service isn't available to disseminate their seeds far and wide. But there are other creatures that can take on the task on a smaller scale. The cactus finch, one of 13 closely related Darwin's finches unique to the Gal&aacute;pagos, has a specially adapted beak, sturdy enough to open a hole in the side of the tough fruit. The beak is also long and pointed, allowing the bird to avoid the sharp spikes of even the spiniest plants. During the driest months, this small, drab bird draws much of its nourishment and water from the protein-rich seeds and sticky jelly of the unripe cactus fruits. In its wake, mockingbirds and less well-endowed finch species also cash in.

Inevitably a few seeds are dropped here and there to germinate. And when the trees burst into bloom at the beginning of the hot season just before Christmas, the finches' slender beaks become perfect tools for extracting nectar and pulp from deep within the bright yellow blossoms. Their faces smeared with sticky pollen, the birds flit from tree to tree, pollinating flowers as they go and ensuring the fertility of next year's fruit. From the highest branches they burst into song to proclaim their territorial rights over such riches. In dry years, when the cacti are the only plants to bloom and many small birds go hungry, the cactus finch is often the only species able to nest and raise young. 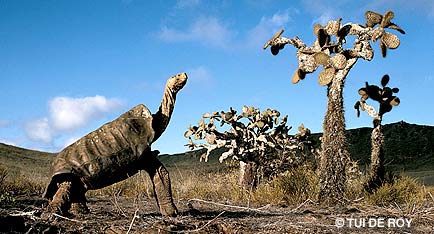 STANDING TALL: Despite its long legs and neck, the saddleback (above) must wait to satisfy its hunger with fallen pads from the giant prickly pear. The cactus shields itself against the tortoise's powerful jaws with a buttress-shaped trunk.

But the finch is not the only one on pollination duty. The carpenter bee, a large, shiny, black bumblebee, dives into the long, frilly stamens, reemerging completely dusted in pollen. Meanwhile, a whole bevy of nesting Darwin's finches--small-, large- and medium-billed--all covet the security of the spiny citadels. Carefully wedged between bristling pads and stems well beyond the reach of foot-long predatory centipedes, they construct neatly woven straw domes with small side entrances where their nestlings are shaded from the sun. 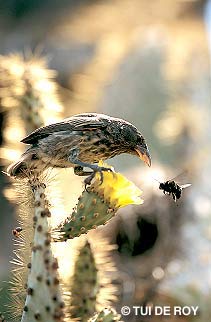 WHEN IT BLOOMS, the giant prickly pear cactus lures pollinators, such as this Darwin's finch and carpenter bee (above), to feed on nectar from its flowers.

The woodpecker finch also belongs to the Darwin's finch group, but it is an insect eater whose specialty is to find termites and grubs hidden in dead wood. But because the finch lacks the long, pointed tongue of a true woodpecker, the bird will often flit to the nearest cactus and select a long, sharp spine to do the job instead. In what is one of the few known cases of tool use in birds, the finch will pluck the chosen spine and break it down to the desired length before deftly prizing out its dinner.

When the huge cacti have lived out their many decades--possibly even centuries--of life, they will make one final grand contribution to the animals. As their root structures among the lava boulders weaken, their fibrous branches and water-laden trunk make them top heavy. Without warning, all at once a giant will topple, its bloated limbs shattering like a great heap of watermelons with white flesh. Dozens of small birds--finches, doves and mockingbirds--join in with land iguanas or tortoises, depending on the location, to draw on the life-giving moisture. Such liquid is important on islands where it often doesn't rain for months. Even small lava lizards take surreptitious nips, and at night rice rats and centipedes may join the feast until nothing but wickerlike fibers and a pile of spines remain.

A giant may have died, but life is passed on. And when the Galapagos volcanoes erupt again, as they do from time to time, the landscape will be blanketed once again in fresh lava flows until, in due course, young cactus plants appear and the cycle of dependencies emerges anew.