Until Everglades habitat is restored, some unexpected nesting sites are helping the American crocodile come back in South Florida 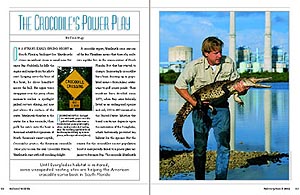 ON A STARRY EARLY SPRING NIGHT in South Florida, biologist Joe Wasilewski steers an airboat down a canal near Biscayne Bay. Suddenly, he kills the engine and jumps from the pilot's seat. Leaping onto the bow of the boat, he dives headfirst across the hull. His upper torso disappears over the prow, where moments earlier a spotlight picked out two shining, red eyes just above the surface of the water. Wasilewski thrashes in the water for a few seconds, then pulls his catch onto the boat: a three-and-a-half-foot specimen of North America's rarest reptile, Crocodylus acutus, the American crocodile. "Now you've seen the real ‘Crocodile Hunter,'" Wasilewski says with self-mocking delight.

A crocodile expert, Wasilewski once was one of the few Floridians aware that these shy, reclusive reptiles live in the warm waters of South Florida. But that has started to change. Increasingly crocodiles have been showing up in populated areas--from inland waterways to golf course ponds. Their numbers have doubled since 1975, when they were federally listed as an endangered species and only 200 to 400 remained in the United States. Whether this trend continues depends upon the restoration of the Everglades, which historically provided key habitat for the species. But the reason for the crocodile's recent population boost is unexpectedly linked to a power plant adjacent to Biscayne Bay. The crocodile Wasilewski just captured came out of one of the plant's cooling canals.

These canals--all 168 miles of them--allow the water coming from the generators at Florida Power and Light to cool before reentering the bay. When the company constructed them in the 1970s at its Turkey Point plant, it unknowingly created habitat for crocodiles, which dig their nests in the loose substrate between the canals. When hatchlings were discovered there in 1978, the company began monitoring the crocs on its property.

As the principal researcher at Turkey Point since 1989, Wasilewski, much to his delight, has watched the number of nesting crocodiles steadily increase. Last year, he found 17 successful nests. "They're smart animals," he says. "It didn't take them long to figure out that this was a good place to nest." About 60 adult and subadult crocodiles--one-tenth of those surviving in the United States--live in these cooling canals. 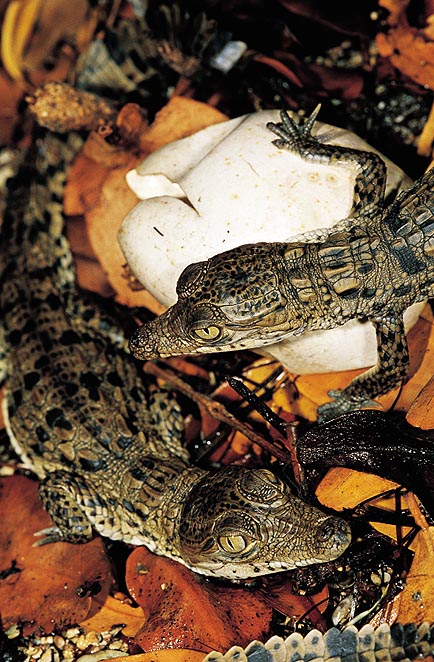 Photo: © BRIAN KENNEY
READY TO ROLL: These hatchlings face life on their own. Like all crocs, they will see their mother for the first and last time on the day they crack open their shells. Three months after burying her eggs, a mother crocodile claws open the nest to deposit the next generation at the water's edge.

In addition to Turkey Point, crocodiles nest in two other areas in South Florida: the southern mainland portion of Everglades National Park and northern Key Largo, where they are protected by the 6,600-acre Crocodile Lake National Wildlife Refuge, established in 1980.

Historically, the American crocodile's range in Florida extended as far north as Lake Worth on the east coast of the state and Fort Myers on the west coast. Most estimates put the original population at only 1,000 to 2,000 animals. But in the last 100 years, poachers turned crocodiles into luggage, and mangroves and marshes became mall parking lots and two-stall garages. The crocodile population dwindled until only an estimated 20 nesting females remained in the early 1970s.

No one knows this history better than Frank Mazzotti, a University of Florida wildlife biologist who has devoted his life to the elusive reptile that was first identified in the United States little more than a century ago. In 1977 Mazzotti, then a graduate student, began assisting with fieldwork on the crocodile in Everglades National Park. At the time, little was known about the animal except that it appeared to be in dire straits. Mazzotti's work led to a Ph.D. dissertation on the American crocodile and a dedication to the croc's welfare that seems to know no bounds: He once gave mouth-to-mouth resuscitation to a baby crocodile that he rescued from the clutches of a blue crab. The crab had nearly drowned the hatchling, but the scientist blew into the crocodile's mouth until it spit out water and began breathing again.

Mazzotti's research has brought about a better understanding of the crocodile's life history and an appreciation for the animal's demeanor. He has discovered that the temperament of this species is nothing like its relatives in Africa and Australia, which are feared as man-eaters. Of the world's 21 species of crocodiles, "this crocodile is a real sweetheart," says Mazzotti, who adds that there are no known cases of a crocodile killing a human in the United States.

Everyone has heard the phrase. It means that the person doing the crying is expressing insincere remorse. Either the sadness is not genuine or the tears are being used to gain undeserved sympathy. The idea that crocodiles cry dates back to a thirteenth-century French encyclopedia, which claimed that the creatures feigned tears over their victims.

Of course, crocodiles don't really cry. But their tears are real. "Crocs do produce tears that, like our own, are products of the lachrymal glands behind the eyelids," says Adam Britton, a crocodile specialist at Wildlife Management International in Australia. The fluid cleans the eye and probably reduces bacterial growth. Tears are normally only noticeable if the crocodile has been out of the water awhile and its eyes begin to dry out--which is the case in the photograph above. For more on the natural history and conservation of crocodiles, visit http://crocodilian.com.

The American crocodile is even less aggressive than the Florida alligator, with which it is frequently confused. A crocodile can be distinguished from an alligator by several traits, most conspicuously by its narrower snout and its coloration--an olive green to gray-brown mottled with black. The alligator is uniformly black. In addition, the fourth tooth on the bottom on each side of the croc's mouth protrudes outside of the upper jaw.

Florida is the northernmost extension of the American crocodile's range, which includes Cuba, Jamaica, Hispaniola and the Caribbean coast from Venezuela to the Yucatan as well as the Pacific coast from Peru to Mexico. But the Florida subspecies has been completely isolated from its relatives for at least 60,000 years.

Nocturnal by nature, the croc feeds primarily on crabs, fish, snakes, turtles, birds and small mammals, rarely anything larger than a raccoon or rabbit. The species, which can grow as long as 13 feet, also feeds on its own kind--a trait Wasilewski was reminded of when he ran a scanner over the small croc he had just pulled onto the boat. A beep signaled the presence of a microchip, which he has been implanting in the hatchlings at Turkey Point. But this croc had his tail clipped, a sign that he was from the Key Largo area where microchips aren't used. In fact, two microchip numbers appeared on the scanner, prompting Wasilweski to exclaim: "How about this guy. He's eaten two of my crocodiles!"

As is the case for many reptiles, the mortality for hatchlings is high--90 to 95 percent. But since a female croc lays 20 to 50 eggs each time, only a few need to survive in order to maintain the species. Females become sexually mature at 11 to 13 years of age. After mating, which occurs in late winter and early spring in Florida, the female excavates a nest cavity on high ground--usually a beach, stream bank or canal levee--and lays her eggs, covering them with soil. The eggs incubate for 85 to 90 days. When they are ready to hatch, the mother will put her ear to the nest to listen for the chattering of young crocs about to break out of their eggs. Since the babies are unable to dig their way out of the nest on their own, the mother uncovers them, then carries them to the water in her mouth. After this moment of tenderness, the babies are on their own.

To survive the early months of their lives, young crocs must seek shelter from the wind and waves, avoid predators and find food. Hatchlings as well as adult crocodiles are also affected by the salt content of the water, particularly in Everglades National Park where the water experiences sudden changes in salinity.

Historically, fresh water flowing through the Everglades lowered the water's salinity where it emptied into Florida Bay, producing the estuarine conditions that benefit crocodiles. The problem, of course, is that the natural water flow was disrupted long ago. "Water flows downhill," Mazzotti says, borrowing a phrase, "except in Florida where it flows toward money."

The park's canals, gates and pump stations that divert and hold water "produce huge swings of salinity in the coastal waters of Florida Bay because of the big releases of fresh water," says Skip Snow, a wildlife biologist at Everglades National Park. "It has wreaked havoc on plants and animals."

Photo: © FRITZ PÖLKING (BRUCE COLEMAN INC.)
TOOTHY GRIN: Teeth are one way to distinguish a crocodile from its alligator cousin. The fourth tooth on each side of the crocodile's snout slides into a notch and is always visible.

In recent decades water has been held in management areas outside the park for agricultural uses, then released when it wasn't needed. Thus, rather than a slow, relatively constant flow of fresh water through the glades, large quantities of fresh water are dumped into the park, producing sudden changes in water levels in the marsh and sudden deluges of fresh water into Florida Bay. This causes the sea grass to die out, which in turn means the fish and other marine animals that frequent the sea grass beds diminish, significantly decreasing the amount of prey available to the crocodiles.

During the months when fresh water is held back from flowing through the glades and into the bay, salinity in the areas near the southeast coast of the Everglades rises. This turns the area from estuarine to marine lagoon conditions, which also lowers the number and diversity of plants and animals.

Consequently, restoration of the Everglades is crucial to the survival of the American crocodile. If engineers and biologists are able to ensure a more natural water flow for the famed "river of grass," the crocodile population may continue to grow. "The American crocodile is one of the flagship endangered species for the Everglades restoration," says Mazzotti. "It will be among the best indicators of how successful the restoration is because the croc lives at the end point of the water that flows through the Everglades." In the meantime, thanks to the unwitting help of a power plant, a reptile that walked the Earth with dinosaurs has entered the twenty-first century with a brighter outlook than it has had in some time.