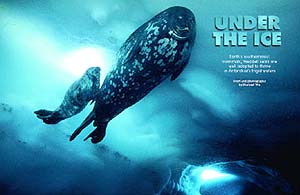 UNDER A SHEET of ice six feet thick, I am floating in a room filled with ice crystals, which surround me and cover the seafloor. As I move over them, some crystals become detached and drift slowly up to the ice ceiling. Shining through the ice, light fills the room, illuminating dozens of red and orange sea stars below. The cold has heightened my senses. I've been in the water for more than an hour, and my hands have gone from numb to painful, yet the dive has been exhilarating, as most here are. I am diving in Antarctica--the coldest, windiest, driest and most remote continent on Earth.

As a photographer and filmmaker who specializes in marine environments, I've come here courtesy of the National Science Foundation's U.S. Antarctic Program to document the continent's fascinating underwater world--which, to my delight, includes Weddell seals (Leptonychotes weddellii), the world's southernmost mammal species. The seals' eerie whistles, trills and chirps fill my ears on nearly every dive off the islands that dot McMurdo Sound.

Until recently, scientists believed these waters housed a relatively low diversity of life. Now it seems that the continent's biodiversity is richer than they ever imagined--though you'd never guess this from the surface. In the words of my diving partner, biological oceanographer M. Dale Stokes of the Scripps Institution of Oceanography: "There's this large, active, colorful community under the ice, and then you come up through a hole into a raging blizzard." 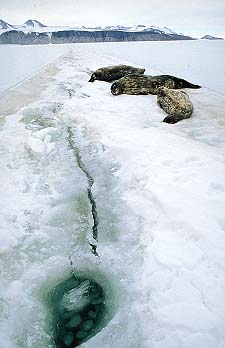 Photo: ©; NORBERT WU
ICY INTERFACE: Weddell seals have adapted to the comforts and rigors of life on both sides of the Antarctic ice. Topside, seals doze and soak up the sunshine (left), and females nurse and give birth to pups.

Life in such a harsh environment is far from easy. Weddell seals, for example, survive by keeping air holes in the ice open year-round with their teeth. When their teeth wear out, the seals die.

Understandably, competition around air holes can be intense. When male seals are nearby, other males appear restless when breathing at a hole, peering down and only occasionally taking a long, deep breath. If a hole fits only one seal, that animal may dive when another comes up, or he may reverse position and face down to prevent the intruder from surfacing. In this head-down fighting posture, a male keeps his eyes facing forward, his foreflippers extended, and sometimes opens his mouth. If a hole is large enough for two seals, and the breathing male refuses to leave, the newcomer may surface anyway, sparking a fight. Swimming under the holes, males clack their teeth as they pass one another. Large bulls use long trills to establish and maintain territories.

One young male, frustrated by lack of mating success, follows a mother and pup. In a false display of confidence, he opens his mouth wide in aggression. The mother is unconcerned with such territorial problems. She swims up to an air hole, and no one bothers her as she keeps a watchful eye on her pup.

Above the ice, near a small volcanic island, another mother and pup bask in the sunlight, surrounded by ice boulders the size of minivans. The pup is only a few hours old, and the stains of its afterbirth show up clearly on the ice. Behind them looms Mount Erebus, sulfurous gases steaming from its cone. The air is so clear that the mountain looks close enough to touch.

The mother and pup awaken, and the pup nurses. Then they slide into an air hole. Below the surface, the jumbled landscape of ice is transformed into underwater passageways. The pup is learning to swim, and after a few minutes of energetic diving, it is exhausted. The pup rests, its body hidden in the brash ice of the breathing hole. The mother, assured that her offspring is safe, makes her way through the shallow passageways and dives down the slope of the island, past the surprisingly rich and colorful benthic community.

Swimming to the ice ceiling, the female finds a school of Antarctic silversides (Pleurogramma antarctica). She flushes her prey out of a crevice by blowing bubbles, then quickly snaps them up in her jaws. Randall Davis, a marine biologist at Texas A&M University, has captured this fascinating behavior on video, which he obtains by strapping tiny cameras and data recorders onto the backs of seals when they surface to breathe. Among his team's other discoveries are that Weddell seals hunt by sight rather than by sound, as biologists previously believed, and that the animals can find their way back to the same small air hole after traveling underwater more than a mile. A typical dive lasts about 20 minutes, but scientists have observed individuals that stay underwater as long as 82 minutes. 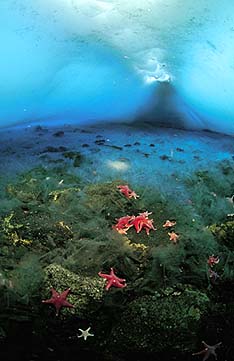 The mother seal swims back to the island, joining her pup. The pup slips easily up the air hole, encouraged by a nudge from its mother. She then bounces up and down in the hole, gaining momentum with each push. Finally, with tremendous effort, she hoists her body through the hole and onto the surface. The pair joins other seals dozing in the warmth of the Antarctic summer sun.

Special as this experience has been, taking photographs in Antarctica presented many challenges. On land, I continually had to compensate for snow and ice, which fools camera meters into underexposing images. Because of heavy ice cover, Antarctic waters can be very dark, demanding long shutter speeds. The cold wreaked havoc with my underwater cameras. I brought a dozen camera bodies, seven underwater housings and a dozen underwater flash units. By the end of my 12-week stay, I'd shot 500 rolls of film, but only three housings and strobes were still working properly.

The continent's extreme conditions also present challenges to divers. When the diving season begins in late September, the sun has just begun to rise after four months of darkness; the water, free of plankton, is clearer than any in the world. Prevented from freezing by salt, the water's cold is as intense as its clarity. This is never a place to let down your guard: I always knew my regulator could freeze up at any moment if I breathed too fast or worked too hard. And like the seals I was spying on, I needed to keep track of the dive hole I'd entered, my only exit to the outside world.

With subjects ranging from the frigid waters of Antarctica to tropical coral reefs and rain forests, Norbert Wu's images have appeared in thousands of books and magazines. As a Pew Marine Conservation Fellow, he is currently documenting the world's most unique and threatened underwater habitats.