A Plague of Aliens 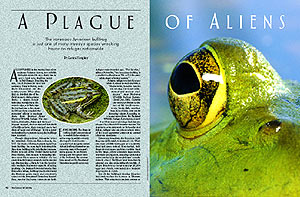 ACCUSTOMED to the searing heat of the southern Arizona desert, two wildlife biologists scramble up a dusty rise to get a look at a shallow pond called Chango. Reaching the top, Cecil Schwalbe and his assistant, Dennis Suhre, train their binoculars on the murky water. What they find on this first day of the field season disheartens them: a dozen heads reflecting sunlight near the water's edge, a telltale sign that at least some American bullfrogs have evaded the scientists' efforts to eradicate them from Buenos Aires National Wildlife Refuge. The year before, Schwalbe, Suhre and their collea gues trapped, shot or speared hundreds of bullfrogs here, then pumped every last drop of water out of Chango. Yet in a pond replenished by monsoon rains, the bullfrogs have returned.

Though disappointed, Schwalbe is not too surprised. For more than a decade, the U.S. Geological Survey herpetologist has been battling the seemingly indestructible American bullfrog with only limited success. Native to much of the United States east of New Mexico, this creature is spreading further west like a summer wildfire. As the green invader's range expands, native species are disappearing—literally into the mouths of a predator that seems capable of eating anything. On Buenos Aires and nearby San Bernadino refuge, bullfrogs nearly eliminated the Mexican garter s nake and completely wiped out the threatened Chiricahua leopard frog, species that were common on both refuges only decades ago. "For its size," affirms Schwalbe, "the American bullfrog is a predator without peer. We call it the great white shark of inland waters."

Arizona refuges are hardly alone when it comes to such problems. "Nationwide, invasive species are among our most widespread and serious challenges," says National Wildlife Refuge System Chief Dan Ashe. Culprits are nearly as diverse as the tree of life itself—mammals, birds, fish, reptiles, insects, mollusks, even pretty flowering plants. According to a recent report from the National Wildlife Refuge Association, nearly 8 million acres of refuge habitat are plagued by at least 675 invasive species. Yet thanks to scientists such as Schwalbe and Suhre, refuges also are places where some of the most aggressive attempts to control aliens are underway.

Like many invasives, the American bullfrog was deliberately introduced—by Western state wildlife managers as a potential food and game animal. Also typical, bullfrogs do not cause problems within their native range, where abundant large predators such as alligators, snapping turtles and water snakes keep the amphibians' populations in check. Bullfrogs (and invasives in general) are also extraordinarily prolific. A single female may lay as many as 20,000 eggs per clutch, compared to a leopard frog's 2,000 to 3,000.

Yet it's the bullfrog's feeding behavior that truly makes it a menace to Western natives. This voracious creature consumes virtually any living thing it can fit into its enormous mouth. "We've found every vertebrate class that lives in Arizona inside the bullfrog's stomach," says Schwalbe, "including snakes, lizards, turtles, birds and even bats."

Surprisingly, the vertebrate discovered most often in a bullfrog's stomach is another bullfrog. Yet even cannibalism works to the animal's advantage. Through a mechanism Schwalbe terms "biological bootstrapping," the amphibians—by feeding on young frogs that always have plenty of insects to eat—do not rely on fluctuating populations of other vertebrate prey. Combined with fecundity and an absence of predators, this allows population densities to grow 20 to 30 times higher than they are back East.

Cannibalism also gives young frogs a powerful incentive to move as far from their hungry elders as possible. And move they do—over land for impressively long distances considering the bullfrog is an aquatic creature. Marking and recapturing frogs on Buenos Aires, Suhre has discovered that the animals can travel more than four miles in just a few weeks, a talent that helps the species expand its range quickly and makes this alien particularly tough to eradicate.

Still, Schwalbe and University of Arizona biologist Phil Rosen set out to do just that two years ago after a single population of leopard frogs was discovered on the refuge. Their long-term plan is to repopulate all suitable waters with the natives after purging the ponds of bullfrogs. Though the invader has proved a tougher adversary than anticipated, Schwalbe remains hopeful. In addition to an abundance of good leopard frog habitat at Buenos Aires, he believes that "refuges are ideal places for conducting these experiments."

Indeed, stamping out alien species is a top priority throughout the refuge system. On some refuges, the efforts are heroic. Take Loxahatchee National Wildlife Refuge in Florida, where managers have spent $3 million pulling up, chain sawing and poisoning more than 3 million Australian melaleuca trees that infest some 100,000 acres. Now they've added a promising biocontrol agent to their arsenal: tiny sap-sucking psyllid insects that feed avidly, and exclusively, on melaleuca.

Another ambitious project is attempting to eliminate a South American rodent, nutria, from Maryland's Blackwater National Wildlife Refuge. Introduced in the 1940s to benefit the fur industry, these prolific animals destroy wetlands by feeding on the roots of marsh plants. Blamed for the loss of 7,000 to 8,000 acres of refuge marshland, nutria are wreaking havoc throughout the Chesapeake Bay region. Recently, a coalition of 17 federal, state and private organizations launched a $2.9 million pilot program to design the best methods to eradicate nutria and restore wetlands. Results of the work, much of it taking place at Blackwater, will be a model for full-scale eradication efforts elsewhere.

Other refuges may soon play a similar role. Ashe describes a new systemwide initiative that has selected 13 refuges to serve as laboratories and demonstration areas for a variety of habitat management techniques. One of the top priorities, he says, will be developing invasive species control measures us eful to land managers both inside and outside the refuge system.

But help will have to flow both ways. No refuge is an island, as Schwalbe is learning the hard way. He believes the bullfrogs he and Suhre discovered migrated onto the refuge from adj acent private ranchland. "If we can't convince ranchers to get rid of their bullfrogs," says Schwalbe, "we'll never reestablish the leopard frog. Even if you kill 90 percent of their population, bullfrog numbers will be back to at least 80 percent the fol lowing season."

Laura Tangley is senior editor of this magazine.

The American bullfrog shares many characteristics common to invasive species, including a broad diet, high fecundity and an absence of predators in its nonnative habitat. One thing that's different is that bullfrogs hail from another part of this country, while most U.S. invasives are true foreigners. Here are just a handful of the undesirable aliens threatening native species on refuges and other lands nationwide.

2. Wild Pig (left): Descended from domestic pigs, this is just one of many alien animals and plants degrading habitat for endangered birds on Hawaii's Hakalau Forest National Wildlife Refuge, where volunteers help fence out the grazers and replant native vegetation.

3. Purple Loosestrife: This pretty Eurasian perennial infests hundreds of thousands of acres of refuge and other wetlands nationwide. Displacing native plants, it forms dense stands unsuitable as food or habitat for wildlife. 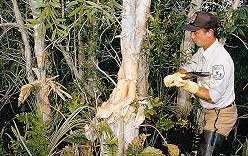 4. Melaleuca (left): Infesting nearly half of Florida's Loxahatchee National Wildlife Refuge (and much of the Florida Everglades), this prolific Australian evergreen destroys habitat for birds such as the wood stork and Everglades snail kite.

5. Nutria: This South American rodent is blamed for the loss of 500-1,000 acres a year on Maryland's Blackwater National Wildlife Refuge, which is part of a regional effort to eradicate the animal and restore wetlands.