A Room With a Flue

For some swifts, nothing is more inviting than a good chimney 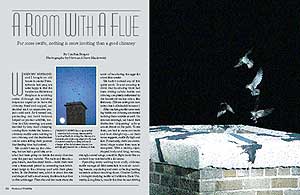 WHEN MY HUSBAND AND I bought an old house in central Pennsylvania last year, we were happy to find the handsome fieldstone fireplace in working order. Although the building inspector urged us to have the chimney lined and capped, we decided such an expensive project could wait. As it turned out, protecting our bank balance helped us protect wildlife, too. One hot July evening, we were startled by very loud cheeping coming from inside the house—chimney swifts were nesting in our chimney, and the featherless chicks were telling their parents that feeding time had arrived.

We couldn’t see up the chimney, but we had a good idea as to what had been going on inside the sooty chamber over the past two months. The male and female—gray-brown, swallow-sized birds—build their nest over a three-week period by cementing matchstick-sized twigs to the chimney wall with their gluey saliva. In the finished nest, which is about the size and shape of half a small saucer, the female lays four or five white eggs. Then she and her mate share the work of incubating the eggs for about four weeks.

We hadn’t noticed any of this quiet work. It was amazing to think that incubating birds had been sitting calmly inside our chimney, completely unflustered by the household ruckus only a few feet away. (We are raising our own noisy clutch of subadult humans.)

After realizing swifts were nesting inside our chimney, we started noticing them outside as well. On summer evenings, we heard their distinctive "chippering" calls as we ate dinner on the patio. To see them, we had to crane our necks and look straight up—as their name suggests, swifts fly high and fast. Fortunately, their unconventional shape makes them easy to recognize. With a stubby, cigar-shaped body and long, narrow, strongly curved wings, a swift in flight looks like an archer’s bow notched with a fat arrow. 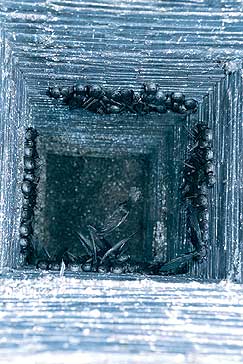 
VIEW FROM ABOVE: Although some chimney swifts still find an occasional dead tree for roosting, most of the birds rely on chimneys to sleep, nest and avoid predators (left). But today these spots are also on the decline. New chimneys are often lined with nonporous materials that make it difficult for the birds to cling to the surface.

Spending every waking hour aloft, chimney swifts manage all life’s essentials in mid-air: catching insects, copulating and even collecting nesting materials without touching down. Charles Collins, a biologist studying swifts at California State University–Long Beach, recalls the time he was driving a convertible in Massachusetts, glanced up at a stoplight and saw chimney swifts on the flyby, deftly breaking twigs from an old elm with their feet. "It was such a rare thing to see, I sat through two light cycles with the people behind me blowing their horns," he says.

At ease in the air, chimney swifts are awkward when they land. They don’t perch conventionally on tree branches or telephone wires. Instead, they use their small feet with strong toes and sharp claws to cling to vertical surfaces. Like woodpeckers, swifts also have stiff, bristle-tipped tails that help to prop them up. By staying aloft all day, and then sleeping and nesting in protected places—preferably chimneys—swifts reduce their chances of being preyed upon.

But what then did chimney swifts do in North America 400 years ago before chimneys? Originally, they nested in hollow trees. When the eastern forests that formed their breeding range were cut for farmland, chimney swifts lost their nest sites. They adapted by switching to the brick chimneys sprouting in new settlements.

They also moved west as the nation expanded—or so experts surmise. In the early 1800s, naturalist John James Audubon asserted that these birds, which he called American swifts, never reached west of the Mississippi. Today, says Collins, "chimney swifts routinely breed across the plains to the foothills of the Rockies."

There are even scattered records of chimney swifts nesting in California—where their relatives, Vaux’s swifts, still find hollow-tree nest sites in old-growth forests but are also starting to take advantage of chimneys as habitat. Two other species of swifts breed in North America: black swifts, which hide their nests behind waterfalls and on wet sea cliffs, and white-throated swifts, which squeeze their nests into crevices along mountain cliffs.

As for swifts nesting in chimneys, I’m delighted that they settled in amid our household hustle-bustle, but not everyone feels that way. "Their sounds are what get the birds in trouble," says Paul Kyle, who with his wife Georgean directs the North American Chimney Swift Nest Site Research Project, part of the Texas-based Driftwood Wildlife Association. "When the parents fly down the chimney with food, the nestlings make a really loud ‘yippering’ sound. Some people are frightened by it. It’s kind of unworldly."

The Kyles hope to change that perception. Working with the bird conservation organization Partners in Flight, they’ve been writing and distributing educational pamphlets that address homeowners’ concerns: That ghostly noise is just baby birds being fed; your house will quiet down in a few weeks; the birds do not bring diseases into your house; and they do eat lots of mosquitoes, so they’re helpful to have around. "With this information, we hope people will want to host the birds," says Paul. He and Georgean have gone to great lengths to make the birds feel at home, constructing two chimney swift "nesting towers" against their house—complete with convenient viewing ports.

Though chimney swifts are still abundant, data from the U.S. Breeding Bird Survey suggest turbulence ahead. Since the 1980s, their numbers have been dropping slightly but consistently, about one to two percent a year. "During the same time period, other bird species with the same life-style—for example, swallows—showed stable or increasing numbers," says Chuck Hunter, U.S. Fish and Wildlife Service nongame migratory bird coordinator for the southeast region.


GETTING A GRIP: With strong toes and sharp claws, chimney swifts such as these four fledglings are well suited for vertical clinging. The young birds were venturing from their nest just prior to their first flight.

Why would a bird that’s at ease amid human development be declining? The reason may be fewer available nest sites, says Dana Bradshaw, a biologist at the College of William and Mary’s Center for Conservation Biology in Williamsburg, Virginia. "New chimneys are no longer made completely of brick," he says. "Often they have a metal or tile flue, and swifts can’t get a grip on the smooth surface." Meanwhile brick chimneys on older homes are often capped, which keeps out pesky squirrels and raccoons but also swifts in need of a nest site.

Another problem may be a lack of roosting sites during the birds’ spring and fall migrations. In the past, factories, schools and churches were built with capacious chimneys, and migrating swifts used them as "stopover sites"—a place to roost and refuel on their long flights to and from their wintering grounds in the upper Amazon Basin of eastern Peru, northern Chile and northwestern Brazil.

A chance sighting of one of these big roosts is what got Bradshaw interested in swifts. One evening, driving through downtown Richmond, Virginia, he saw what looked like the whirling black funnel of a tornado above an old school chimney. It was a flock of 5,000 swifts circling as it prepared to roost for the night. That got Bradshaw thinking: When historic buildings are modernized or bulldozed in urban renewal, the birds lose important roost sites. "In late 2001, I saw an abandoned warehouse in downtown Richmond torn down to make room for a new grocery store," he says. "The previous fall, I’d documented more than 1,000 swifts roosting in its chimney."

Even when old buildings are remodeled along historic preservation guidelines, the birds’ needs may not be taken into account. Laurel Hahlen, former director of the South Georgia Task Force for the Homeless, once worked in an old school that had swifts roosting in its big chimney. When the building was remodeled, the façade was restored to its original appearance, but the chimney was removed. This was considered aesthetically acceptable because the chimney wasn’t visible (to humans) from the street. Hahlen tried, unsuccessfully, to change the plan. "That was one of my favorite things about working there—seeing the birds flying into the chimney at dusk," she says ruefully.

To get a handle on how the loss of roosting sites affects the birds, the Center for Conservation Biology now sponsors Project SwiftWatch. "We’re trying to create a nationwide registry that tracks significant roost sites," says Bradshaw. "We hope the data we gather will address the importance of historical structures." Karin Grosz, a conservation planner who lives near the Mispillion River in Milford, Delaware, is one of the project’s enthusiastic volunteers. "To find a roost site you have to be outdoors at dusk, watching the birds as they feed and mingle over the river," she says. "If you see them start to spin and form that dark funnel of birds, you just triangulate on the spot and head toward it. I did a lot of my work on my bike."

So far Grosz has added about a dozen roost sites to the database. "I find them the most enchanting birds—they are so fascinating, and there’s so little known about them," she says.

Bird-banding studies show that chimney swifts can live up to 14 years. And they often return to the same site year after year. We’re taking this into account as we work to make our 80-year-old house more comfortable for visitors. We’ve remodeled the guest-room and fixed up the bathroom. But we still haven’t capped the chimney.

Don’t fret about swifts in your chimney, they only need it in summer when you’re not typically using it anyway.
Get your chimney cleaned early in spring, before the birds arrive. Not only is creosote build-up a fire hazard, but it also prevents nests from sticking. With a clean chimney, there’s less chance that baby birds will tumble down the chimney.
Keep the damper closed to prevent birds from flying into the house, where they could get trapped or injured. This will also reduce noise. (If your fireplace doesn’t have a damper or the damper isn’t working, wedge a piece of foam rubber into the fireplace. Remove it in the fall.)
If you decide to cap your chimney, wait until the nesting season is over. Swifts are protected under the Migratory Bird Treaty Act, so it’s unlawful to disturb them or their nests.—Paul Kyle