To improve your birding skills, listen to what the birds are saying 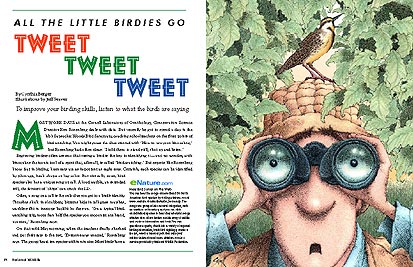 MOST WORK DAYS at the Cornell Laboratory of Ornithology, Conservation Science Director Ken Rosenberg deals with data. But recently he got to spend a day in the lab’s Sapsucker Woods Bird Sanctuary, coaching schoolteachers on the finer points of bird watching. You might guess the class started with "How to use your binoculars," but Rosenberg had other ideas: "I told them to stand still, shut up and listen."

Beginning birders often assume that seeing a bird is the key to identifying it—and no wonder, with binoculars the iconic tool of a sport that, after all, is called "bird-watching." But experts like Rosenberg know that in birding, keen ears are as important as eagle eyes. Certainly, each species can be identified by plumage, beak shape or leg color. But virtually every bird species also has a unique song or call. A loud warble, an extended trill, the faintest of "chips" can cinch the I.D.

Often, a song or a call is the only clue you get to a bird’s identity. Thrushes skulk in shrubbery, bitterns hide in tall-grass marshes, warblers flit in treetops backlit by the sun. "On a typical bird-watching trip, more than half the species you encounter are heard, not seen," Rosenberg says.

On that mild May morning, when the teachers finally shushed and put their ears to the test, "Everyone was amazed," Rosenberg says. The group heard ten species within minutes. Most birds have a diverse repertoire of sounds. Scientists sort these sounds into two primary classes: songs and calls. It’s worth noting that not all birds sing. Only birds in the order Passeriformes (the "perching birds") make sounds that are considered true songs.

In general, a song is a male’s breeding-season vocalization. The male sings to announce "I’ve got a territory, competitors stay clear," or "I’m looking for a mate," or both. Calls are shorter and simpler than songs, and they serve a variety of purposes. For example, a mated pair will use contact calls to stay in touch: "Here I am, where are you?" Alarm calls are a response to danger, such as a hawk overhead. Hungry baby birds make begging calls. So do females during courtship.

To human ears, songs seem more musical than calls. Songs and calls are produced in the same way, however, by the syrinx, an organ in the trachea (the airway leading to the lungs). The sounds that birds make do not have to be modified by the mouth or tongue—as human speech is—so many bird species can sing without even opening their beaks. The more complex the syrinx, the more complex the sounds produced.

To learn to identify birds by sound, start with "language tapes"—a birder’s Berlitz guide, if you will. Commercial bird-sound recordings come in two formats, audio CD and CD-ROM, and two categories, field guides and tutorials.

Audio field guides, like printed field guides, present birds in taxonomic order (loons and grebes first, finches last). An announcer says each bird’s name before the bird belts out its stuff. Some audio guides include all the birds of North America. Others are limited to just eastern or western species.

Audio field guides are especially handy as references. Let’s say you’re out in the field, you hear a bird, and you know it’s a warbler but not which one. So you go home and play a couple field guide tracks (or you whip your portable player out of your backpack) and you’re on your way to identifying that suspect bird.

Some people play field guide CDs in the car during those long commutes. (Practice looking nonchalant, though—inevitably you’ll be stopped at a light with the windows down right when the announcer is blaring, "Pro-thon-a-tar-y warbler.") The trouble with field guides is, they’re a little monotonous. (Just try to keep your eyes from glazing over during the piks, wiks and wukka-wukkas of all 22 species of North American woodpecker.)

Bird-sound tutorials, on the other hand, coach you through the process of distinguishing and remembering sounds. Some tutorials group birds by sound rather than taxonomy: "trillers," "whistlers," "high-pitchers" and so on. The narration points out distinctive elements in each song.

Guides also make liberal use of mnemonics, or memory aids. It’s much easier to remember a song when you translate it into a catchy phrase—for example, the black-throated blue warbler says, I am so la-zee. "The stranger these mnemonics are, the easier they are to remember," says Dick Walton, a former elementary schoolteacher who has produced a series of bird-call tutorials.

Birders have many strategies for learning and remembering bird sounds. One approach is simply descriptive. The black-and-white warbler sounds like a squeaky wheel. The rusty blackbird sounds like a rusty hinge. A field sparrow’s song is like a bouncing ping pong ball—it starts out slow, then gets faster and faster. Some song descriptions are so apt that they become the bird’s name. Mourning doves sound depressed. Laughing gulls are named for their maniacal braying.

Not all song descriptions are equally helpful, and some are getting dated. Take the saw-whet owl, named for a call that sounds like a saw being sharpened. Do you really know what that sounds like? Probably not, unless you’re a home-improvement fanatic.

On the other hand, birding’s next generation is busy crafting new classics. "A bobolink’s song is often described as ‘A bird that’s trying to say too many notes at once,’" says Walton. "For years I couldn’t do much better than that. And then one day a student said, ‘Yeah, that sounds like R2D2 [the Star Wars robot] gone haywire.’"

Phonetics are another tool for remembering bird songs. Just use common syllables to spell out the bird’s song: The wood thrush says ee-o-lay, the Eastern bluebird says chur-lee. Like apt descriptions, apt phonetics may turn into names. Chickadees say hick-a-dee; whippoorwills say whip-poor-will, and guess what the bobwhite says?

Amusing mnemonics have helped many birders master a novel song. The yellow warbler says sweet, sweet, sweet, I’m so sweet. (It even looks like an old-fashioned candy stick, yellow with red stripes.) American goldfinches sing as they fly in a roller-coaster pattern: Potato chip (and then they dip). The olive-sided flycatcher shouts: Quick, free beer!

Rosenberg says a lot of the best mnemonics are off color. Pressed for an example, he lowers his voice and recites the love song of the warbling vireo: When I see you I will seize you and I’ll squeeze you till you squirt. "If you’re comfortable using that with other birders," he says, "they’ll remember it, all right."

Not everyone agrees on just what the bird is saying. In Maine the white-throated sparrow sings of Old Sam Peabody, but north of the border, birders hear, Oh Sweet Canada, Canada, Canada. "You may prefer to make up your own mnemonics," says Walton. "It’s a question of knowing your own learning style." He cites an adult student—a singer—who pointed out that the red-headed woodpecker "sings from its head" (tsk-tsk, poor vocal technique) while the red-bellied woodpecker "sings from its diaphragm," with a deeper, more tonal sound.

The best way to learn bird sounds is to see the bird at the same time you hear the song. But if you’re usually the one on the warbler walk who is still scanning bare branches while everyone else is saying, "Wow! Look at those wing bars," then a CD-ROM guide might be just the thing for you. Slide the disk into your computer, click and voilà: You see the bird, you hear it sing. At least one guide even includes a quiz function, so you can gauge how much you’re learning.

Well, such technology is grand, but the experts are right: You’ve just got to get out there and listen when the birds are vocal. This means springtime, when males do most of their singing and calling. (You may hear I am so la-zee, but birds hear, "Hey, I’m a male black-throated blue warbler, and I’m in prime breeding condition.") Different species court and sing at different times. Regional field guides or state breeding-bird atlases can tell you which birds you’ll hear when.

Getting outside at the right time also means early morning. We’re talking real early, because birds are most vociferous at dawn, although a smaller spike of song activity occurs near sunset. So down your coffee on the run—you’ll miss the show if you wait till after breakfast.

Steal this strategy from wine connoisseurs: Learn the common stuff first, then introduce the exotic alternatives. Drinking a sturdy cabernet with dinners gives you a baseline for French burgundies at a special tasting. In much the same way, get very comfortable with the American robin’s cheerily, cheerily, and you’re on your way to appreciating the rose-breasted grosbeak (robin with voice lessons) and the scarlet tanager (robin with a sore throat).

Many bird songs are very high pitched, in the part of the human hearing range that fades with age—especially if you spent your youth enjoying Rolling Stones concerts. "That’s the biggest fear birders have, hearing loss," says Stones fan Rosenberg. Lang Elliot, producer of several audio guides that incorporate his own bird-call recordings, has invented a device for hearing-impaired birders, like himself. It converts songs to a lower, audible pitch. "If I go for a bird walk without it, I miss virtually all the warblers," he says. "It brings the world back to me."

Just when you think you’ve got all the bird-song bases covered, remember nature can throw curve balls. Some birds are mimics and flawlessly imitate the songs or calls of other species. That northern cardinal in your yard? Northern mockingbird. (And by the way, that ringing cell phone? European starling.) OK, final point. Contrary to popular belief, all the little birdies do not go tweet tweet tweet. (Prothonatary warbler is the exception.)

Though a former Cornell Lab of Ornithology employee, Cynthia Berger still confuses solitary and red-eyed vireos. She is a freelance writer in central Pennsylvania.