Case of the Disappearing Spoonbills

Birders thought these East Asian birds were abundant, until they found out they were almost extinct 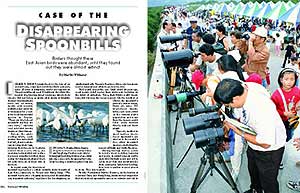 I CLIMB A SHORT, rough track to the top of an embankment, a high spot amidst the Chiku wetlands, some 16 acres of fishponds, creeks and lagoons on Taiwan's southwest coast. A half-hour drive from the nearest city, this big, broad landscape usually feels remote. But not today, as group after group of brightly dressed kindergartners pour out of buses, swarm over wooden platforms and queue up at telescopes for a look at the most famous bird species in Taiwan. "These are black-faced spoonbills and they are very rare," explains local wild bird society chairman Chiu Nan-an.

Asleep, the white wading birds, each around two-and-a-half feet tall, stand motionless on long, black legs, burying their heads in feathers behind their necks. Now, one awakens, looks around and walks a few paces along the mudflat, showcasing its long spoon-shaped black bill with its mask of black skin at the base.

In recent years, the black-faced spoonbill has reached a certain celebrity status in parts of East Asia, especially in Taiwan and Hong Kong. "The spoonbill has become a flagship species, used for protecting very important wetlands," says Lucia Liu Severinghaus, an ornithologist with Taiwan's Academia Sinica who has spearheaded international efforts to protect the bird. 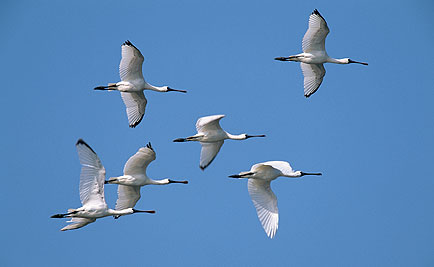 SKY HIGH: Black-faced spoonbills fly above the Chiku wetlands in Taiwan, an important but unprotected site for the species during winter.


That wasn't always the case. Until about 14 years ago, most people didn't realize these birds were teetering on the brink of extinction. Today, their future is still uncertain, but for now the news is good: On the mudflat at Chiku, the spoonbill's primary winter haunt, there are some 350 black-faced spoonbills—well over a third of the current world population and more than the known world total when birders finally noticed their plight.

Typically spotted in small parties, black-faced spoonbills are similar to the world's five other spoonbill species—including the roseate of North and South America.

Striding through shallow waters in muddy river mouths, lagoons and pools, spoonbills sweep partly open bills through water and silt to catch small fish and invertebrates such as prawns. When not feeding, they tend to gather in quiet places to sleep. They also migrate.

At Mai Po Marshes Nature Reserve, on the border of mainland China and Hong Kong, observers had long noted that black-faced spoonbills arrived in autumn and left in spring. Exactly where all the birds headed on their northward migrations was unclear. The only known breeding colonies were on a handful of islands off the west coast of the Korean Peninsula, 1,300 miles northeast of Hong Kong.

In winter, black-faced spoonbills occurred at coastal sites spanning an arc through mainland China from southern Japan through Hong Kong and Taiwan to northern Vietnam—roughly akin to flying from the coast of South Carolina to the Yucatan Peninsula. But political upheavals in China early last century and the closed society that followed turned the spoonbill's assumed stronghold into a virtual black hole for ornithology.

Until recently, researchers studying birds in China had to rely on old information, chiefly a book written by a British consul posted there in the 1930s that described black-faced spoonbills as common. Hong Kong bird-watchers assumed this was still the case.

Until, that is, Peter Kennerley, an avid bird-watcher, turned detective. Kennerley had moved from his native Great Britain to Hong Kong in the mid-1980s. Soon after, he began compiling notes on where to spot north Asian specialties, including the black- faced spoonbill. Kennerley found that the bird was close to extinction and estimated that there were no more than 288 left in the world—90 percent of which wintered at only three sites: Vietnam's Red River Delta, the Chiku wetlands in Taiwan and Hong Kong's Deep Bay. He published his findings in the Hong Kong Bird Watching Society's annual bird report in 1990. "This sounded the warning bells and prompted others to search," he says.

Kennerley's paper appeared in print at a time when green groups, including the World Wildlife Fund for Nature (WWF) Hong Kong, were pushing for greater protection of Deep Bay. Thanks to Kennerley, they now had black-faced spoonbills topping a list of bird species occurring there in globally significant numbers.

Armed with the list, the groups successfully lobbied the governments of Great Britain and China to include the bay under the Ramsar Convention on Wetlands of International Importance, a treaty aimed at bolstering conservation and wise use of wetlands. The presence of black-faced spoonbills also helped stymie plans for new construction of houses and a golf course.

Then came satellite tracking in 1998 and 1999, which stirred public interest in the birds, says Mai Po Marshes Nature Reserve manager Lew Young. Researchers had fitted birds in Taiwan and Hong Kong with radio transmitters, hoping they would lead them to a "new" breeding area. This didn't happen—most birds headed to the known colonies along Korea's west coast—but the project did grab the media's attention. "The birds with transmitters on their backs were photogenic," says Young.

Black-faced spoonbills also became a high-profile species in a fight over a railway line planned through threatened wetlands near the Mai Po reserve. A record 252 black-faced spoonbills were spotted at the reserve in the fall of 2000, and the media carried the news widely. The following year, public pressure forced the railroad company to abandon plans for a viaduct and instead construct a less intrusive tunnel under a key part of the wetlands.

More recently, black-faced spoonbill fever has spread to the nearby country of Macau, where 40 of the birds spent the 2001-2002 winter at a marsh on partly reclaimed land. Though the area is slated for a casino development, Young says the spoonbills' presence has encouraged a groundswell of public support for the marsh's conservation.

In Taiwan, where the chimneys of giant steelworks and other factories in the south belch out steady streams of smoke, and swathes of plain along the island's west coast have been similarly devastated, the black-faced spoonbill's future depends upon the protection of the Chiku wetlands on the southwest coast. 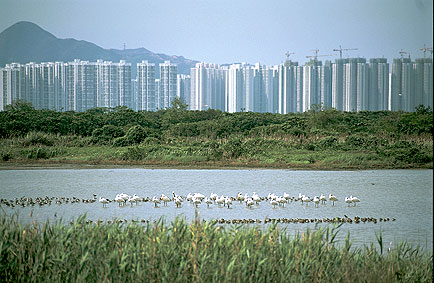 COLLIDING WORLDS: A flock of black-faced spoonbills roosts in the shadow of Tin Shui Wai (left), a new town south of the Mai Po reserve. In the face of so much development, local activists hope to educate the public about spoonbills by encouraging commercial ventures.

On my journey to Chiku I pass through Tainan City with local bird-watcher Philip Kuo Tung-hui. Pointing toward what had once been a tidal inlet he says, "In the 1970s and 1980s, I saw 30 to 50 black-faced spoonbills here each winter." Now, most of the area has been filled in to house a high-tech industrial park. In the fish and salt ponds that remain, herons, ducks and shorebirds are still plentiful, but spoonbills have become scarce.

Crossing a large creek, we turn left and enter Chiku: spoonbill country. Right away, we can tell the city is proud of its local superstar; a restaurant's exterior is decorated with three-foot high photos of the birds, and there's even a Black-Faced Spoonbill Education Centre.

Kuo points to white birds in the fishpond we are approaching. "I think those are spoonbills," he announces. We stop to watch and count about 60 of the birds in all. They're walking quickly forward, bills thrust into the water, bodies twisting as they swing their heads from side to side, using half-open bills to find and gulp down fish. The birds move as if they are choreographed, making it easy to see why some Taiwanese bird-watchers have nicknamed them "black-faced dancers."

"We sometimes see adults teaching young birds to catch fish," says Kuo. "An adult walks in front, catches a fish and drops it, so the juvenile behind can catch it." Kuo figures the spoonbills must be hungry today—it's unusual for them to be feeding in the early afternoon. Typically, they spend much of the day at the mudflat roost, flying off to feed closer to dusk.

We pass a signpost capped with a spoonbill weather vane, pointing the way to the mudflat. Minutes later, we arrive at a spoonbill viewing platform on the embankment, built to entice visitors to Chiku after a large flock—almost half the species' entire population—was spotted there in 1984.

Realizing the flock's global significance, Kuo helped found the Tainan Wild Bird Society in 1992. "At the time, there was hunting at Chiku, mostly of ducks but sometimes of black-faced spoonbills," he says. "We petitioned the Council of Agriculture and said these are rare black-faced spoonbills that shouldn't be disturbed." The next year, the government duly clamped down on hunting. At around the same time, following pressure from the bird society and other groups, the government rejected plans for a steel refinery on the mudflat.

Undaunted, the steel company allied with a petrochemical company to promote Binnan, a sprawling industrial park that would devour a 1,000-acre expanse of farmland, lagoon and shoreline just north of the mudflat.

Conservationists protested that Binnan would destroy the Chiku lagoon and could pollute the entire wetland. Plans have since become "greener" but not green enough, say protesters. The current county commissioner—who has expressed opposition to Binnan—has proposed that the area be protected as a national scenic site. But at this writing, Taiwan's Environmental Protection Administration has said it will approve plans for the industrial park, pending a revised final draft.

Invariably, the protests over Binnan have highlighted the black-faced spoonbill. Huang Min-ching, a professor of statistics who is among the chief anti-Binnan crusaders, has spearheaded many of the protests. On one day during my visit, I find myself sitting among fishers who, instructed by Huang, raise fists and shout (in Taiwanese) "Protect Chiku! Protect the lagoon! Protect the black-faced spoonbill! Love Chiku! Love Taiwan! Down with Binnan!" Nearby, Huang talks to reporters.

With the spoonbill's rise to stardom, Taiwanese have taken to visiting this vantage point in ever-growing numbers. In an old pillbox that's become a store, I meet Li Bin-hua, a retired electrician and nature-loving merchant, selling black-faced spoonbill paraphernalia—calendars, books, T-shirts, watches and puppets. "Perhaps 2,000 to 3,000 people visit here each week," he says. Huang is hoping to boost visitor numbers further by organizing "spoonbill safaris" in collaboration with local fishers.

No one knows why the spoonbill's population apparently has increased since the early 1990s and why counts at Chiku have risen to more than 650 birds recently, but Huang believes that educational and commercial ventures could help ensure the species' survival.

Right now, the black-faced spoonbills on the mudflat at least appear safe, unruffled by all the human activity nearby. As the kindergartners settle down to draw pictures of the creatures, the bird that had earlier caught everyone's attention comes to a halt. Then, its bill disappears as it tucks its head behind feathers and goes back to sleep.

A free-lance writer and photographer specializing in wildlife and conservation issues, Martin Williams has lived in Hong Kong since 1987.