Why Curtailing Your Cat Is for the Birds 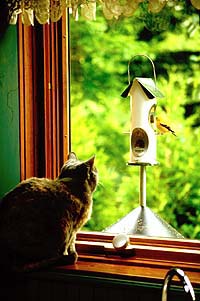 CHANCES ARE you're not the only one delighted with the songbirds in your backyard. Your neighbor's tabby cat—or maybe yours—is eyeing them, too, and with lethal intentions. Of the 73 million pet cats in the United States, an estimated 40 million roam outside unsupervised. Throw in feral cats—the unsocialized offspring of discarded or lost pets—and as many as 100 million cats are on the loose. "These cats could easily be killing 100 million songbirds a year," says Al Manville, wildlife biologist at the U.S. Fish and Wildlife Service Migratory Bird Management Office.

Cats on the prowl primarily kill small mammals, but according to multiple scientific studies, an estimated 20 to 30 percent of their kills are birds. And that they mostly kill rodents is not necessarily a good thing. "Cats compete with owls, hawks, weasels and other important native predators that aren't subsidized by people and that need these creatures to survive," says Ed Clark, director of the Wildlife Center of Virginia, the nation's largest wildlife hospital.

That "mouse" deposited on your front stoop might well be a least shrew, a star-nosed mole or some other rare and ecologically important species. In some places, cat predation is frustrating efforts to save federally endangered species, such as the piping plover, the California gnatcatcher and the Florida beach mouse.

A University of Wisconsin study in the early 1990s found that the estimated 1.4 million to 2 million cats that range freely in rural areas of the state kill 31.4 million small mammals and 7.8 million birds a year—at a minimum. "We knew the study would be controversial so we went with the most conservative estimates," says biologist Stanley Temple, coauthor of the study and caretaker of three—contained—cats.

The U.S. Department of Agriculture and the Wisconsin Department of Natural Resources funded the five-year undertaking to see if free-ranging cats were the culprits behind the low reproductive success and high mortality of grassland birds. "The government was investing millions of dollars to encourage farmers to create habitats that would attract grassland birds, and as it turns out, the very places that became attractive to birds became attractive to cats," Temple says. In parts of rural Wisconsin, roaming cat densities can reach 114 cats per square mile.

Felis catus, descendent of the wild cat of Africa and Asia, first came in large numbers to North America in the 1800s. Because native species didn't evolve with the domestic cat, their natural instinct to avoid it is weak. "The domestic cat's effect on wildlife is toxic," says Clark. "If you let your cat outside, you might as well be pouring poison out your back door. It doesn't matter to a bird if it died from pesticides or a cat. It's still dead."

Clark's wildlife hospital treats about 3,000 animals a year—some 150 species. Of the injured, one in five is the victim of a cat. Less than 20 percent recover. "And those are just the ones people bring to us," says Clark. "It doesn't account for the animals that die unseen. We also have no way of knowing if cats are to blame for the animals we get that are orphaned."

The "fortunate" few that people pry out of their cat's claws and turn loose fair no better. With 60 different kinds of bacteria in a cat's saliva, even a tiny puncture packs a lethal punch. "People are woefully mistaken if they think they can turn an injured creature loose and it will survive," says Clark.

That people protect free-roaming cats from disease and starvation makes them an even more potent force and gives them an advantage that truly wild predators—which become scarce as their prey declines—don't have. A hearty house cat can hunt the last shrew or meadowlark of a population without suffering the consequences, says Temple. And pet cats are not the only problem. According to Alley Cat Allies, a feral cat advocacy group, some 15 million people feed stray cats.

The group advocates trapping feral cats to sterilize and vaccinate them before releasing them back outside, preferably in a area where someone will provide food and water. The theory is that the population won't breed and eventually it will die out. But in reality, says Alan Hopkins of Audubon's San Francisco Save the Quail campaign, it promotes more dumping of animals. "If people think that the cats in a particular colony lead a happy life, there's nothing to keep them from putting their cats out there," he says. "I do understand that people who 'manage' feral cat colonies are trying to do the right thing, but it's a feel-good agenda that's misguided. They don't understand the impact the cats are having on wildlife, and they are consciously making the decision that a cat's life is worth more than all the animals it will kill." Another problem with the managed colony approach, adds Temple, is that it often establishes a higher density of predators than would be there naturally.

Feral cat advocates often argue that cats are made the scapegoat for our environmental woes—that habitat destruction, radio towers, pesticides and window collisions kill more birds and that human life-styles have far greater impacts on birds and wildlife. "Many of us sympathize with the cause—no one wants to hear that millions of cats are killed in animal shelters every year—and no one is saying that cats are the biggest threat to birds," says Temple. "But cats are a significant threat in the little habitat that remains."

Even if cats killed only a few animals a month, it adds up, says Linda Winter, director of the American Bird Conservancy's Cats Indoors! campaign. "We may not know the exact numbers of birds that cats kill, but we know cats kill them, and it's an unnecessary and easily avoidable loss," she says.

While rural cats—with the most access to wildlife—might be doing the most damage, suburban and city cats are no less a problem. Birds and mammals struggling to adapt to a new subdivision not only lose habitat, they face new predators in the form of roving house cats. Birds also migrate through cities, making pit stops in street trees and backyard gardens. "But even if a city had no native wildlife, outside cats are still a concern because it's not just a conservation issue, it's an animal welfare issue," says Winter.

According to The Humane Society of the United States (HSUS), millions of cats are killed by autos annually. In Washington, D.C., it's the number one reason for injury, followed by fights with wild animals such as raccoons. People who have issues with a neighbor's roaming pet also may take matters into their own hands without talking it over with a cat's owner first. "We get animals at the shelter all the time that someone drops off and refuses to tell us where it came from," says Jim Monsma, director of the D.C. Animal Shelter.

On average, only about five percent of stray cats taken in at animal shelters get reunited with their families, according to HSUS. Another important statistic: Cats allowed to roam often don't see age five, says Stephanie Shain of HSUS's Safe Cats campaign. Even in "safe" situations, on a cold day they may curl up on a car engine, ingest poison or come in contact with cats that carry fatal feline immunosuppressant diseases. Cats that are kept safely inside can live to see 13 or even 20 years. "It's a myth that going outside is a requirement for feline happiness," Shain says. "Playing regularly with your cat easily satisfies the stalking instinct and provides the exercise needed to stay healthy and happy. In fact, indoor cats that get lots of attention and playtime with their humans are likely happier than indoor-outdoor cats."

Keeping your cat inside is a win-win situation for your cat and for wildlife, says Clark, who shares his home with two felines and stresses that the issue of outdoor cats is a people problem—not a cat problem. "Vilifying the cat is not the answer. Responsible stewardship is," he says. "A person's belief that their cat has a 'right' to hunt shouldn't take precedence over the protection of vulnerable, native wildlife species. They face enough hurdles already."

It may sound crazy, but setting up a bird-watching area for your pet cat may save some of the 100 million songbirds that are destroyed every year by free-ranging house cats.

It is well documented that free-ranging house cats are severely detrimental to songbirds. Though keeping one's cat indoors would seem to be the obvious solution to saving the songbirds, less than half of the 73 million pet cats in the United States live indoors.

"My cat could never be happy indoors" is a typical response from owners that allow their pets to roam outside. "It isn't natural for cats to live indoors" is another rationale. Neither excuse is true. In fact, indoor cats are healthier, longer-lived and more content. And a cat’s interest in birds can easily be satisfied by setting up a bird-friendly area outside a window that will provide entertainment that is safe and natural for the cat and the birds. It could even lead to a new dimension in the owner's life as well.

All you need to do is provide the three essentials of any successful backyard bird habitat—food, cover and water—outside the cat's favorite viewing window. Begin by installing a couple of small trees or shrubs (in the ground or in pots) for natural cover. Then place several bird feeders, containing a variety of bird foods—seeds, suet and sugar water—in the area, along with a small birdbath. In no time, the birds will find the mini-habitat outside your cat window and make it a regular stopping place on their rounds of the neighborhood. All this action will be to the delight of Thomas or Thomasina, who will not miss a beat.—George H. Harrison

Find out about the American Bird Conservancy's Cats Indoors campaign.
Learn how to turn your yard into a Certified Wildlife Habitat.
Check out these tips for attracting birds to your garden.