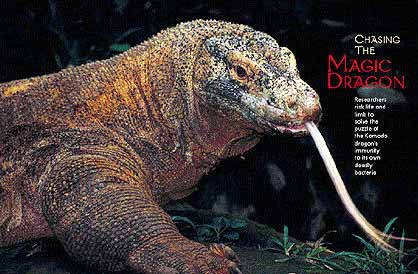 LUIS CRUZ stalks his prey carefully. Armed only with a crocodile noose—a 15-foot plastic pole with a lasso at the end—the park ranger is trying to capture the world’s largest lizard, a Komodo dragon. Though it doesn’t breathe fire, this dragon is still a fearsome beast: more than seven feet in length and weighing more than 150 pounds, with flesh-slicing serrated teeth, a whiplike tail that can snap bones and a top running speed of nearly 20 miles per hour. Dragons are voracious carnivores that regularly kill and eat animals more than five times larger than Cruz.

But the scaly, gray-green reptile isn’t thinking about making a meal of Cruz on this hot, sunny morning at Indonesia’s Komodo National Park. It just wants to be left alone. So it shuffles away under the palm trees as the ranger approaches. But, with a deft movement, Cruz slips the lasso over the reptile’s head. A half-dozen of Cruz’s colleagues move in quickly to help immobilize the dragon, tying its legs with thick nylon cord and wrapping duct tape around its snout.

When the reptile is subdued, Terry Fredeking and Putra Sastrawan move in. Fredeking is the founder of Antibody Systems, Inc., a Texas biotechnology firm. Sastrawan is a biologist at Udayana University in Bali, Indonesia, and one of the world’s leading experts on dragons. Fredeking has enlisted the help of Sastrawan and several other scientists and reptile experts, along with the Komodo park rangers, to help him solve a mystery about these reptiles. The puzzle revolves around the stew of bacteria in the dragon’s thick, copious saliva—bacteria virulent enough to infect and kill deer, goats, water buffalo and other creatures unfortunate enough to get bitten by the drooling reptile. If these microbes can kill other animals, Fredeking wants to know, why don’t they kill the dragon itself? Does the lizard have some natural antibody in its blood—one that can be harnessed for human health? 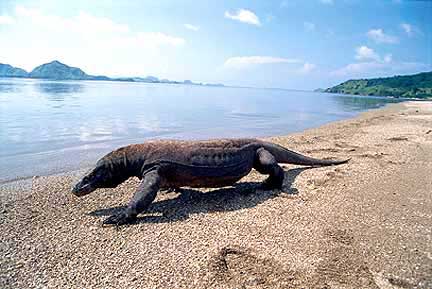 DRAGON STALKER: A Komodo dragon (pictured) prowls a beach on its namesake island in Indonesia. These lizards, the world’s largest, weigh upwards of 150 pounds when fully grown. They are swift and voracious predators, regularly killing animals several times their size. Such daunting facts keep most people at a respectful distance, but not Terry Fredeking. The founder of a Texas biotechnology firm, Fredeking has made several trips to Komodo Island to capture dragons and study their immune systems. He hopes the research may result in some new antibiotics for human use.

"We don’t understand how they survive their own bacteria," says Fredeking. "We think the dragon holds the secret in its immune system."

The magic immunity is just one of many mysteries about the Komodo dragon. Despite its imposing presence, the dragon (technically, a monitor lizard, and not a mythical monster) was unknown to Western science until 1912. That was when Peter Ouwens, a zoo director in what was then Dutch-ruled Java, examined specimens collected by a hunter and published the first scientific paper describing the species. Many of the creatures were captured in subsequent decades and sent to zoos around the world. But the lizard remained little studied in its natural habitat until 1969, when Walter Auffenberg, a biologist at the University of Florida, set up a camp on Komodo Island.

Assisting Auffenberg with his research was a young volunteer from Bali, Putra Sastrawan, who had just finished his studies in animal husbandry. Sastrawan knew little about the dragons initially and volunteered for the assignment partly because no one else in his college class was willing to take on the challenge. But Sastrawan quickly learned to respect these creatures. Soon after he arrived on Komodo, he was helping the American scientist measure the head of a young dragon they had captured. The animal moved suddenly and creased Auffenberg’s thumb with its teeth, "and he bled like hell—like he was cut with a razor blade," Sastrawan recalls.

Sastrawan spent nearly a year on Komodo helping Auffenberg, and subsequently made the creature his life’s work. He has spent many months in the field observing the dragon’s habits, and what Sastrawan finds most intriguing is the creature’s brain power. "This is a smart animal—very intelligent," Sastrawan says. "It usually knows what paths the deer use to go up and down a hill. The dragon just waits by the trail acting like a log, when the deer comes, he grabs it by the hind foot."

Often the lizard will kill and dismember its prey on the spot. The commotion of a kill and the smell of blood will bring other drooling dragons out from hiding to join in the feast, and little is left to waste—entrails, hoofs and hides included. "The animal looks lazy, but it is not," Sastrawan says. "Once they smell blood, they go crazy."

But the dragon does not always kill its prey on the spot. Particularly with larger prey such as buffalo, "they just take a little bite, follow the trail of blood, and two or three days later find it dead," Sastrawan says.

Why does the animal die so soon after being bitten by the dragon, often from just a single bite? "The rumor is that the Komodo dragon is a poisonous animal, just like a snake. But it is not poisonous," says Sastrawan. "It is due to the fact that quite a bit of microbes live in the saliva." 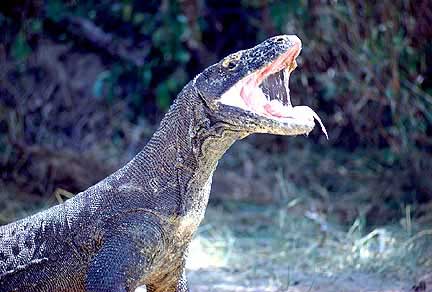 SPIT SHINE: Microbes in the dragon’s drool (pictured) are so powerful that a single bite from the lizard can infect and kill an adult sambar deer in a few days. To discover the identity of these deadly bacteria and learn how the lizard protects itself from them, Fredeking and a team of scientists took blood and saliva from dozens of wild dragons and brought the samples back to the United States for testing.

It was these microbes that got Terry Fredeking interested in Komodo dragons. The businessman from Hurst, Texas, was looking for new, naturally occurring antibiotics that his company might be able to isolate and manufacture for human use.

"We started looking at various creatures like vultures, that eat decaying flesh and therefore have lots of bacteria in their mouths," Fredeking recalls. "We asked, what protects them from the bacteria?" One of Fredeking’s scientific advisors at the University of Texas, George Stewart, read papers by Auffenberg and others about how Komodo dragons often kill prey by infecting them—yet the dragons themselves are immune.

"Vultures don’t have teeth," Fredeking says. "But dragons do, and that’s what sold me. Because the dragons’ teeth come through and tear their gums and they bleed. They have direct exposure to bacteria every time they eat."

To discover the secret to the dragon’s immunity, Fredeking needed to analyze samples of the reptile’s blood and saliva—preferably samples from wild dragons, which, unlike captive reptiles in Western zoos, have never had contact with antibiotics. He got in touch with Sastrawan, asking for advice and help in securing the necessary permits and cooperation from Indonesian officials and rangers. After long months of effort, he received government approval. Then the Texan assembled a team of reptile experts from three U.S. zoos and a doctor specializing in emergency medicine, and took them and their equipment to Indonesia. They met Sastrawan in Bali, then journeyed by plane and boat to the island of Komodo, 300 miles east.

Cruz and his fellow rangers, who have plenty of experience dealing with wild dragons, were put in charge of capturing the beasts. Fredeking had trapped Mexican bats and Tasmanian devils before, so he knew the difficulties of catching wild animals. But with Komodo dragons, he got more than he bargained for. "The first time we put a noose over a dragon’s head, he went crazy," Fredeking recalls. "There was an eight-foot-long, 150-pound dragon flopping like a tunafish in an aluminum boat. All that thrashing brought other dragons, and they came running out of the woods at us. It was more exciting than a cavalry charge!"

Fortunately for Fredeking’s team, rangers chased the other dragons away while they worked on the captured reptile. Sastrawan used cotton swabs to gather saliva samples from the dragons’ taped mouth while another team member, Don Gillespie (a herpetologist now with the Nashville zoo), drew blood with a syringe from veins in the dragon’s tail.

The team took samples from more than two dozen different wild dragons during several trips to Komodo in the late 1990s. "This is a damn hard job," says Sastrawan. "You have to catch, tie, measure, take blood—it’s very hard. The other hard thing is to release them once we’re done. You count—one, two, three—and everyone releases the creature at the same time and runs away, and hopes the dragon runs the other way."

Fredeking brought the dragon samples back to the States with him for analysis. Stewart and his colleagues at the University of Texas looked at the saliva, and found 57 different strains of bacteria growing there. The most interesting type was called Pasteurella multocida. "Normally it takes about three days for a sample of P. multocida to cover a petri dish," says Fredeking. "Ours took eight hours. We were very taken aback by how virulent these strains were."

So were the laboratory mice injected with saliva containing the bacteria. All died within four days of receiving the infusion of the microbe-laden saliva.

But the dragons are unaffected by the deadly bacteria in their saliva. Also, Stewart and his colleagues found, the blood samples taken from the dragons neutralize P. multocida—so there must be something in the reptiles’ blood that protects them.

Unfortunately, scientists haven’t been able to determine what that something is. "We’re still working on defining what molecule is in Komodo dragon blood that appears to be antibacterial," says Andy Salzman of Inotek Pharmaceuticals in Beverly, Massachusetts, who is now trying to identify the substance for Fredeking. "We’ve tested this molecule on various things. We know its size and structure, but we don’t know what it is."

So the mystery of the Komodo dragon’s immunity—a puzzle that Luis Cruz, Sastrawan, Fredeking and many others have labored over and perhaps even risked their lives for—remains unsolved.

"Maybe the dragons are just genetically not susceptible to bacteria," Fredeking muses. "If so, we might be able to transplant their genes into humans. But then," he adds, laughing, "we’d have to worry about people turning green and growing tails and eating their dogs!"