When they are born, great hunters need a coach and a mother; for this consummate predator, mom is both 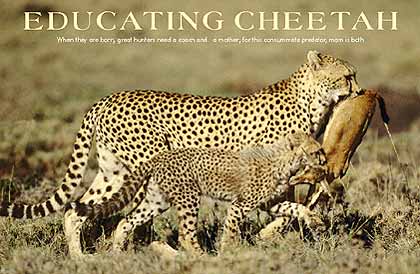 THE HUNTING LIFE for a young cheetah begins early and involves much more than developing the incredible sprints—up to 60 miles per hour—for which the cat is famous. Almost as soon as they can walk, cheetah cubs race around, slap and knock each other down, and stalk and nip their siblings. Yet whether they develop these skills and grow up to be successful killing machines hinges on their subsequent education—a phase of the cat’s life that until recently was a mystery to scientists.

"For some time, we marveled at the cheetah’s speed records and swift turns as it pursues a quarry," says Tim Caro, a wildlife biologist at the University of California–Davis who studied the predators in Tanzania’s Serengeti National Park for more than two decades. "But we took the way in which it learns such skills for granted." Today, thanks to researchers such as Caro—aided by the species’ unusual diurnal hunting habits—scientists know more about how a young cheetah learns to hunt than they do about this stage of life in any other big cat.

Even before a cheetah cub enrolls in Hunting 101, it must learn what to eat. This means mom—which like all cats is solely responsible for cub rearing—must educate her offspring’s palate. Cubs leave their lair for the first time at about eight weeks old, and within days they are introduced to solid food. The pint-sized predators do not instantly chow down on gazelle haunch, though. After a mother makes a kill, she calls in her cubs with a high pitched chrr—often repeatedly, Caro observes, as the cubs initially are far from enthusiastic about the meal.

"At first they approach the kill, but after sniffing it, they back away in apprehension," says Caro. After a couple weeks, at least some of the cubs finally catch on and begin to chew laboriously with their baby teeth. But the going is slow, and more often than not, Caro has observed a cub simply giving up and wandering away while its mother and siblings continue to feed. 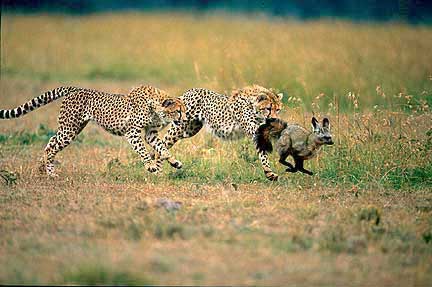 
WATCHING MOTHER: While they are still young, cheetah cubs get to witness the hunting prowess of an expert: their mother, which like all cats has sole responsibility for raising offspring. Cheetahs chasing prey, in this case a bat-eared fox (pictured), can attain speeds of up 60 miles an hour.

After determining what’s good to eat, the next step in the young carnivores’ education is to find out where the meal comes from. In the beginning, says Caro, "they pursue whatever moves, no matter how inappropriate—chasing down birds of all sizes, from plovers to eagles, which simply escape by taking off." Some cubs aim high and pursue giraffes, prey far too big even for adult cheetahs. Others observe distant prey and yip, "a vocalization usually reserved for calling family members, which suggests they want to attract prey to them," notes Caro.

Between the ages of two and three months, cubs begin to accompany their mother on the hunt, though at first they appear to be merely along for the ride. "They simply trot after her or run or walk to the prey but rarely show adult hunting behavior," says Caro. Such behavior entails stalking a little, then—if the cat might be noticed—freezing and waiting until the prey loses interest before moving as close as possible to decrease chase distance.

But mother’s little helpers frequently spoil this careful pas de deux. "Often, the cubs reveal that cheetahs are nearby by walking forward or even playing with each other while the gazelles still have their heads up," says Caro, who calculates that just over 16 percent of a mother cheetah’s hunts are ruined by her incompetent cubs. The worst offenders are older cubs between the ages of five and seven months. Like unwilling human preteens on a family outing, such cubs "may become completely disinterested and walk off at an oblique angle, alerting the prey," says Caro.

Provided her pupils finally allow her to land prey, a mother cheetah next tries to teach the finer skills of stalking and chasing, by bringing back her catch live for the cubs to capture and dispatch. Though she begins with something easy—a newborn gazelle, for instance—the cubs’ mastery of this critical step is likewise far from automatic. 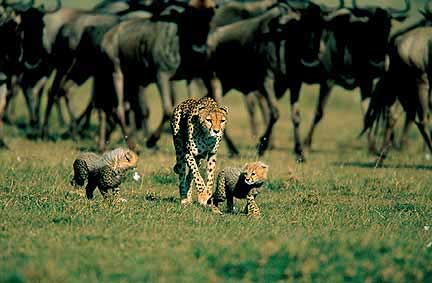 LEARNING CURVE: At the age of two to four months, cheetah cubs begin to accompany their mother (pictured) when she hunts. But the youngsters’ incompetence often foils her efforts. Some cubs will play, scaring off prey before mom can catch it.

Wildlife photographers Anup and Manoj Shah—whose three-year pursuit of cheetah families across Kenya produced the accompanying images—witnessed several scenes such as the following: "A mother brought prey to her babies, but when the prey stood up, they seemed to say, ‘Hey, Mom, maybe we can play with this,’" recalls Anup. "When the prey started moving, they were still clueless."

Eventually, at about five months, some cubs are beginning to get it. "When released prey flees, these cubs canter after it and try to slap its hindquarters," says Caro. "Yet they are still reluctant to tackle and attempt to suffocate prey." That’s not surprising, given the amount of time and skill needed to do that. After chasing and knocking down an animal, a cheetah must then hold down the struggling captive with its weight and forepaws and grab its throat as quickly as possible. Often the prey will revive and need to be suffocated two or three more times. Finishing the job typically takes between 5 and 15 minutes, but can last as long as 25 minutes.

Once the cubs get a little older—between eight months and a year—mom releases about a third of the prey she catches, and the cubs at least occasionally kill the animals on their own. Rapid progress at this point is important. Two months after their mother becomes pregnant again, when the cubs are between a year and 18 months old, they will be forced to fend for themselves. 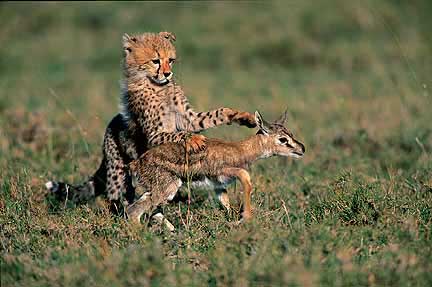 FOOD HANDLING: Even when a mother cheetah delivers prey to her young, cubs such as this one with a newborn gazelle (pictured) may not know what to do with it.

No one knows if the break between a cheetah mother and her cubs is abrupt or gradual. What is clear is that family dissolution occurs before the young are fully capable hunters, which may be one of the reasons—along with protection from predators—that siblings stay together about six months after mom departs.

Coinciding with her first estrus, a young female will be the first to strike out and begin life on her own. Indeed, Caro observes that even as young cubs, females more often take the initiative in the hunt, while males are "lazy," relying on their mothers and sisters to capture prey for them. Yet as adults, cheetah brothers, which remain together for life, also exhibit the incredible speeds and predatory prowess for which the cats are famous. Those skills have helped the cheetah survive for three to four million years—longer than any other big cat on Earth today.

Specializing in animal behavior, writer Adele Conover has previously contributed to this magazine as well as to Smithsonian, Sports Illustrated and others.

Sadly, hunting prowess and speed have not helped cheetahs escape the powerful forces threatening the species’ survival, from habitat destruction and lion predation on cubs to conflicts with human farmers and ranchers. Some 20,000 years ago, cheetahs (perhaps more than one species) ranged throughout the world—even in North America, where some experts say the cat may have evolved. But 10,000 years ago, at the end of the Pleistocene Epoch, cheetah populations dropped dramatically, severely reducing the species’ genetic variabilty. Today only about 50 Asian cheetahs survive in the wild, almost all of them in Iran. African cheetahs are believed to number about 12,500, down from an estimated 100,000 at the end of the nineteenth century.