Gray Ghosts of the Cloud Forest 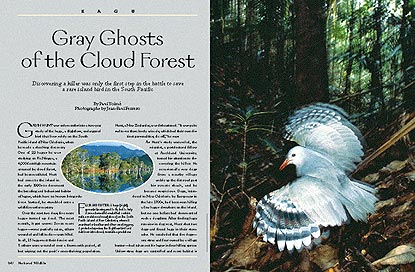 GAVIN HUNT was only months into a two-year study of the kagu, a flightless, endangered bird that lives solely on the South Pacific island of New Caledonia, when he made a shocking discovery. One of 22 kagus he was studying on Pic Ningua, a 4,000-foot-high mountain crowned by cloud forest, had been mutilated. Hunt had come to the island in the early 1990s to document the breeding and behavioral habits of kagus, which have no known living relatives. Instead, he stumbled onto a wildlife murder mystery.

Over the next two days, five more kagus turned up dead. The next month, it got worse: Seven more kagus—some partially eaten, others wounded and left to die—were killed. In all, 15 kagus met their demise and 5 others were wounded over a four-month period, all but wiping out the peak’s once-thriving population. Hunt, a New Zealander, was disheartened. "It was quite sad to see these lovely animals, which had their own distinct personalities, die off," he says. 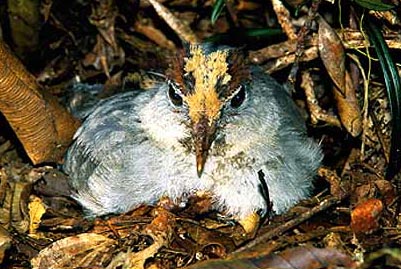 GIMME SHELTER: Kagu pairs appear to mate for life, yet prefer to remain solitary except during breeding season. Each year, they raise one chick (above, six weeks old).


As Hunt’s study unraveled, the scientist, a postdoctoral fellow at Auckland University, turned his attention to discovering the killer. He occasionally saw dogs from a nearby village amble up the dirt road past his remote shack, and he became suspicious. Dogs, introduced to New Caledonia by Europeans in the late 1700s, had been seen killing a few kagus elsewhere on the island, but no one before had documented such a slaughter. After finding kagu remains in dog scat, Hunt shot two dogs and found kagu in their stomachs. He concluded that five dogs—one stray and four owned by a village hunter—had taken out his kagus in four killing sprees. Unless stray dogs are controlled and more habitat is protected across New Caledonia, Hunt wrote in Bird Conservation International in 1996, doubts remain about "long-term kagu persistence in the wild."

Today, with only 600 to 1,000 kagus left on the island, international conservation organizations are racing to safeguard the species. Development, mining and agriculture have all helped push New Caledonia’s national bird to the brink. Nobody can say how many originally populated the island—itself unique with one of the highest concentrations of endemic species per acre of any place on Earth—but there is no doubt that the defenseless birds once ranged its entirety in large numbers.

Standing knee-high to a human and weighing about two pounds, kagus have long fascinated ornithologists. Their large, laser-red eyes have superior vision to spot prey—insects, worms, snails and lizards—in dim forest light. The birds, which can live up to 20 years, mate for life, with males able to begin breeding at two years. (Female breeding age is unknown.) They raise just one chick a year, a trait that likely prevented overpopulation on an island about the size of New Jersey but which caused kagu numbers to crash once predators were introduced. 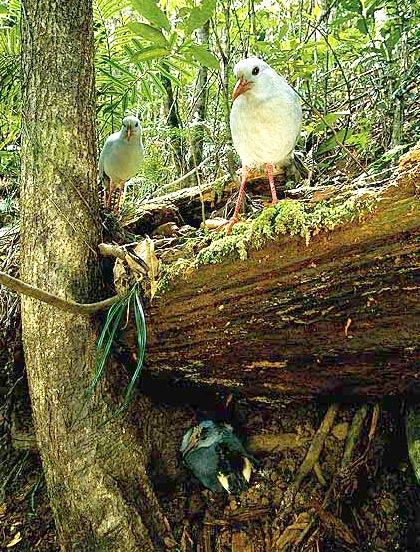 SHELTERED: A kagu chick hides while its parents forage. Offspring remain on the family territory for up to six years.


Kagus nest on the ground and the male and female alternate egg-incubation duties in 24-hour shifts. Once a chick is born, parents swap feeding duties and coo softly to let a newborn know it is suppertime. Offspring leave the nest at 14 weeks, but in a display of the birds’ strong familial bond, juveniles often remain in their parents’ home range for years to help defend chicks. When courting or sensing danger, kagus raise crest feathers that splay upward like a disheveled Mohawk haircut. Gray and white plumage provides no camouflage, but kagus evolved on an island free of predators so there was no need for stealth. This lack of predators made sustained flight unnecessary. But flightless, kagus are no slow pokes: When provoked, they sprint on long red legs and flap their wings for a turbo boost.

Some experts theorize the kagu’s ancestors were carried from the ancient supercontinent Gondwanaland when New Caledonia, which lies 900 miles from the northeast coast of Australia, splintered from the landmass 80 million years ago. Others speculate a long-lost relative of the kagu flew to New Caledonia ages ago and, lacking predators, lost its ability to fly. Some ornithologists have linked the kagu to the Gruiformes, an order that includes birds in South America and Madagascar, although, as Hunt points out in the Handbook of the Birds of the World, "this still remains a matter of speculation." The kagu, whose genus name Rhynochetos combines the Greek words for nose and corn, has corns that cover its nasal openings when it digs for worms. Kagus are the only birds known to have them. Its blood is also unique, with one-third the number of red blood cells and three times the amount of hemoglobin of any other bird. Whatever its origin, the kagu seems tailor-made for the phrase "odd bird."

Take the kagu’s voice. The kagu song begins with a distinctive goo, goo, goo! call that sounds like a bark and can be heard a mile away. Couples sing a 15-minute duet at first light, while spinning to announce their territory. Ages ago, the early morning calls of these birds echoed across New Caledonia, prompting some indigenous islanders to name them "ghosts of the forest." Sadly, kagus have indeed become ghosts on much of the island thanks to changes wrought by white settlers.

When in 1774, Captain James Cook landed there—naming it New Caledonia for his beloved Scotland—he came ashore bearing two dogs as gifts for the indigenous Kanaks. While dogs proliferated, kagus—which one of Cook’s crew sketched for

the fascination of Europeans—steadily declined. After France took over New Caledonia for a penal colony in the 1800s (Cook never claimed the island for Britain), settlers and political prisoners flooded in and logged the forests, cleared land for ranching and mined the mountains. Woodlands now cover less than a quarter of the island, which was once 70 percent forested. Habitat loss, combined with predation from dogs and introduced wild boar, rats and cats, decimated the defenseless birds.

Unlike younger volcanic islands such as Hawaii, New Caledonia, a semi-autonomous territory of France with a population of 200,000, is an ancient land. Dinosaur-age plants evolved in isolation in the island’s diverse habitats—mountains, savannas, mangroves, dry scrub forests and rain forests—creating a stunning variety of species. "New Caledonia is breathtaking but at the same time it’s an environmental horror story because humanity’s footprint is everywhere," says Bruce Beehler, who oversees New Caledonia projects for Conservation International (CI). As this article went to press, CI was working with the indigenous Kanak community to create a haven for kagus and other endemic species in the mountainous region of the far north. "We call New Caledonia," which tops CI’s list of the 25 most endangered places, "the ‘hottest’ of the hot spots," Beehler says.

By the late 1970s, the kagu population had plunged to fewer than 100. It was a sad situation for the island’s beloved but abused national symbol, whose image still adorns government documents, currency and postage stamps. Some settlers even kept kagus as pets until the practice was banned, and a recording of the bird’s distinctive song was played nightly when the island’s television station signed off the air. Then, just as public awareness about the demise of the bald eagle in the United States invigorated a movement to preserve the raptors, conservationists decided action must be taken lest the kagu’s song fall silent forever.

Foremost among these conservationists is Yves Letocart, a New Caledonian park manager recognized as the father of kagu preservation. In the early 1980s, Letocart began the first kagu captive-breeding program and simultaneously began a stray dog eradication effort in Riviére Bleue Provincial Park, the island’s largest protected area. After more than 20 years of work, Letocart’s efforts have paid off: A growing population of 400 or more kagus now live in the park, where birders from around the world flock to watch Letocart beckon kagus from the forest by voice.

"I’ve been fascinated by the kagu since I was a child because it is one of the most strange and unique birds in the world," says Don Roberson of California, who visited Letocart in 1998. Roberson, author of five bird books, was awestruck when a kagu sprinted from the forest at the sound of Letocart’s call. "We were in this spectacular lowland rain forest and, suddenly, out of the mist comes this ghostly bird with a raised crest," he says. The two men dug up some worms and fed the bird by hand. "I’ll never forget that moment."

When Hunt visited New Caledonia in 1991 for his first kagu study, which pegged the kagu population at about 600, he began with a week-long tutorial at Letocart’s home. Then he journeyed the island by motorbike, trudged to remote mountains and valleys and pitched his tent to listen for the bird’s morning song. Hunt vividly remembers the first time he came across a kagu in the wild. Out hiking in the mossy forest on Pic St. Vincent, part of the central mountain chain that runs like a spine down the length of the 250-mile-long, cigar-shaped island, he heard a hiss—the kagu’s way of warning interlopers. Hunt froze and the kagu eventually approached within a few yards. Hunt stood statuesque for a half hour watching the kagu scratch for insects.

Despite his concerns, Hunt is heartened by the surge in kagu populations of the past two decades. "The future of the kagu is encouraging because it’s relatively easy to breed in captivity," he says. If more habitat is protected and stray dogs controlled, kagus could one day repopulate the island, he adds.

Upon returning to Pic Ningua in July 2002, Hunt learned that the rampaging dogs that had wiped out kagus there had been shot. Uncertain whether the birds had returned, he waited in the predawn light near the mist-covered mountain and listened. As the sun rose, one of nature’s most curious symphonies commenced. Kagu song rang through the forest.

Colorado journalist Paul Tolmé, whose father was born on New Caledonia, wrote about the island’s barrier reef in the June/July 2002 issue.