In the Land of Giant Frogs 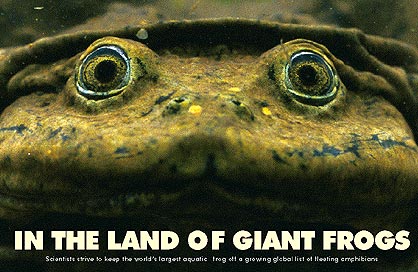 FOR THREE DECADES, pictures of a lake monster living high in the Andes Mountains have haunted me. When Jacques Cousteau mounted an expedition in 1973 to explore Bolivia and Peru’s Lake Titicaca in search of submerged Inca treasure, he instead brought images of a bizarre, giant frog flooding into my childhood living room. Ever since then I have imagined what it would be like to see that frog monster in the flesh. Now I’m standing on the edge of the highest navigable lake in the world with only a thin sheet of aquarium glass standing between me and the biggest aquatic frog on the planet. 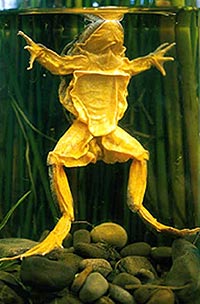 BIG AND WRINKLY: The Titicaca frog’s large, saggy-skinned appearance has helped it adapt to the high-altitude habitat of Lake Titicaca. Larger than a salad plate, the frog absorbs oxygen directly through its superfluous skin so it can stay submerged for long periods of time, avoiding high levels of ultraviolet radiation and other hazards.

I and my wife, Reneé, have come here to a small, rustic research facility run by the Bolivian Institute of Ecology in Huatajata not only to see the Titicaca frog face-to-face, but also to consider its fate. When Cousteau explored the lake bottom in a submersible 30 years ago, he reported that the lake was brimming with "thousands of millions" of giant frogs, many weighing more than two pounds and stretching nearly 20 inches. But local fishermen say the behemoths of Cousteau’s day have long since vanished—and their smaller descendents are becoming harder and harder to find.

Some experts say Cousteau’s early estimates may have been somewhat exaggerated. Thus the Convention on International Trade in Endangered Species (CITES) lists the Titicaca frog as "vulnerable." Still, scientists worry that if current trends prevail, the Titicaca frog population will dwindle—an omen that one of the least studied ecosystems in the world is in grave danger.

Against the backdrop of snow-capped mountains, Lake Titicaca straddles 2,000 square miles of Peruvian and Bolivian landscape at 12,500 feet above sea level. Life at this altitude is adapted for extremes: high levels of ultraviolet radiation, freezing temperatures and oxygen-depleted air. Titicaca frogs survive here and nowhere else.

The key to their success is staying below the lake’s surface. The sluggish, bottom-dwelling frogs manage this feat, despite the fact that they have very small lungs, because they evolved to absorb oxygen directly from the water through their semipermeable skin, which acts like gills. Being larger than a salad plate enhances this adaptation because it gives a frog a greater surface-area-to-body-volume ratio, creating even more efficient oxygen uptake. What’s more, the ratio is maintained throughout a frog’s life span, allowing it to survive as respiration demands increase.

This explains why the saggy skin of a Titicaca frog seems to fit like the baggy trousers of a person featured in a before-and-after weight loss commercial. Even S.W. Garman, who discovered the frog during a 1876 scientific expedition with Alexander Agassiz, made a tongue-in-cheek reference to the frog’s exaggerated skin folds when he named it Telmatobius culeus, "aquatic scrotum" in Latin.

The appearance of this big, wrinkly frog is elaborated further by the variety of colors and patterns that adorn its body. Some are olive green with peach-colored stomachs. Others are entirely black with white marbling. Such variety in the Titicaca frog’s appearance has prompted some scientists to estimate that as many as seven subspecies exist in the lake. But according to Bolivian scientist Edgar Benavides, who conducted DNA studies in 1997, all of these creatures belong to a single, widely varying species.

To learn more about the gentle giants bobbing below the lake’s windblown surface, researchers spend many hours watching them in aquariums at the Bolivian Institute of Ecology. Out in the lake, the enigmatic denizens hunt mostly at night, using binocular vision and long hind legs to navigate the darkness. But here in the lab, they are also active during the day, and fairly nonselective in their diet. The frogs seem to eat almost anything that moves, including fish, snails, crustaceans, tadpoles and worms. They creep up on their prey and suck them up with a single, large gulp. If a crustacean or a fish is too large or too wriggly, the agile amphibians simply use their forefeet to help spoon the victim into their mouths.

A favorite quarry is a small, native fish, known locally as ispi (a Quechua word meaning "baby fish"). Titicaca frogs can capture and swallow whole ispi that are more than three inches long. Some research suggests the ispi might be linked to a dip in the Titicaca frog population. In March 2001, a team of Peruvian divers surveyed the lake bottom and found large areas completely devoid of frogs and ispi. One explanation: The frogs moved out of the area to follow the seasonal north-south ispi migration within the lake. Another: Frogs are impacted by the harvest of ispi for an alternative to expensive trout pellets used at fish farms. A drop in the giant frogs’ main food source could jar the population, and frogs following migrating ispi could easily end up as by-catch. 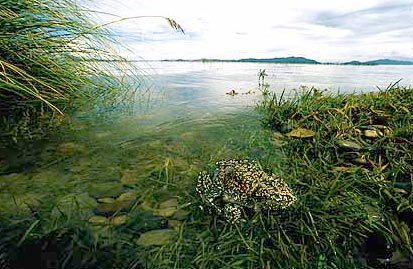 The ispi harvest isn’t the only lake activity being looked at as scientists investigate the frog population, however. The frogs themselves are being harvested—for human consumption. Titicaca frog legs are popular on tourist menus around the lake, though the dish has recently become somewhat difficult to find. Still, some enterprising restaurateurs (many of whom are fishermen) retain small ponds or tanks to display live frogs in hopes of enticing adventurous gastronomes.

Bolivia has no laws in place to protect Titicaca frogs, and Peru does not protect them within the lake—but transporting the oversized amphibians is a criminal offense. During a single month in 1999, Peruvian law enforcement officials intercepted and repatriated over 4,500 live frogs on their way to city restaurants.

Lately, the demand for Titicaca frogs seems to be growing. According to a recent report on Peruvian National Television, 150 live frogs are required daily to satisfy Lima’s latest fad—frog juice, known locally as Peruvian Viagra. Live frogs are stripped of their skins like peeled bananas and dropped into a household blender. Mixed with water, maca (a local tuber) and honey, the juice’s prowess as an aphrodisiac is given great claim by locals who guzzle the concoction in a show of macho bravado. One regular user, Lima local Jorge Flores, says he has a glass of frog juice almost every night. When he plans to go out on the town, he makes it a double.

New trends of eating and drinking frogs buck old traditions. For years, Titicaca frogs have been revered as animals with special powers. Used as rainmakers during times of drought, a large frog would be carried in a ceramic pot to a hilltop where the gods would hear the frog’s distressed cries and misinterpret them as calls for rain. Eventually the rain would fall and overflow the pot, allowing the sacred frog to escape back to the lake. 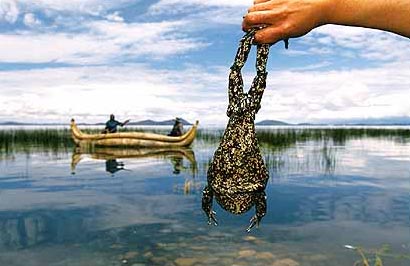 CHANGE OF HEART: Lake Titicaca resident Don Ramon Catari (back, left) once made a living illegally capturing frogs from the lake and selling them to international buyers. Alarmed by the news that the frog population might be declining, Catari has abandoned his entrepreneurial efforts and turned his talents toward helping biologists collect the motley frogs (front) for captive breeding studies.

Titicaca frogs have also been used in traditional medicine. Dried frog meat is said to cure tuberculosis. One treatment for a fracture requires tying a frog to the area as a poultice. A small live frog is swallowed whole to cure a fever. And soup made from a large frog is used to treat both anemia and female infertility.

In an effort to ensure that Titicaca frogs go on being revered—and eaten—in the future, scientists on both sides of the Bolivia–Peru border are studying the frog’s ecology and potential for captive breeding. Headed by Esther Perez on the Bolivian side and Carlos Calmet in Peru, the team is trying to judge the potential viability of a large-scale commercial frog-farming project. If Titicaca frog farming proves feasible, it could be one of the first environmentally sustainable operations in the world.

According to experts, attempts to farm frogs fail because they are labor intensive and plagued by problems with diseases that spread rapidly among concentrations of animals confined in close quarters. Forming an environmentally sustainable operation is even more daunting because it must also offer sufficient protection to the natural resource. "In some areas, farming schemes don’t work simply because people believe that wild animals have special powers, and those farmed do not," says John Behler, a herpetologist at the New York-based Wildlife Conservation Society. "In too many situations, farming is used to cover wild resource exploitation."

Victor Hutchison, a herpetology professor at the University of Oklahoma, who has studied the physiology and ecology of Titicaca frogs in Bolivia, says he has concerns about the impacts of a large-scale, commercial business on the wild population. "With frog farming, you keep harvesting animals under the guise of commercial development," he says, "But there is generally no regulation."

Still, the team of Lake Titicaca frog researchers is hopeful that working directly with indigenous people to raise animals that can be marketed as frog legs and leather will inspire the people to protect the natural resource.

Some locals are already on board. Dressed in a bright poncho and a colorful woolen hat to stave off a morning chill, Don Ramon Catari—an illegal frog fisherman turned conservationist—describes how he once caught 1,000 live frogs to fill a single order for a Japanese buyer. Now he understands that such harvests threaten the frog’s future, as well as his own. He and his son, Simar, are helping scientists at the Bolivian Institute of Ecology care for captive frogs as they try to figure out their nutritional needs. Meanwhile, the research team in Peru is focusing on breeding adult frogs in earthen ponds. Since 2000, they have successfully produced several dozen clutches of eggs.

As excitement about the project grows, more and more local people are beginning to show interest. Daily, curious Aymara Indians peer quizzically into the aquariums at the institute and get eye to eye with the frogs. If these close encounters help the people of Bolivia and Peru develop even a fraction of the affinity that I have felt for the giant amphibian ever since it first leapt into my living room all those years ago, the Titicaca frog might just have a fighting chance.

Husband and wife team Pete Oxford and Reneé Bish have traveled to more than 40 countries to capture wildlife stories in words and photographs. Their work has also appeared in National Geographic, Smithsonian and BBC Wildlife.