Look, Up in the Air

Is airborne creature as strange as the flying snake? 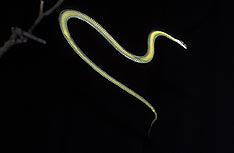 Flying snakes—the stuff of comic books or science fiction movies? No, they're real. Five species of Asian snakes are believed to fly (or, more accurately, glide) from the tops of trees. A new study shows how they perform this seemingly impossible feat.

A biologist from the University of Chicago filmed several paradise tree snakes as they leaped from a branch on a tower at the Singapore Zoo. He found that a snake takes off by forming its body into a loop beneath the branch and jumping, and then flattens itself while airborne.

But while in flight, it not only flattens its entire body, it moves at the same time," says the biologist, Jake Socha. "It's actually undulating in the air."

The sidewinding movement helps the snake glide, and allows it to turn as much as 90 degrees while in the air, despite a lack of wings. The snakes "flew" more than 70 feet and landed without obvious injury, Socha reports in his study, published in the journal Nature.

Why do the snakes fly? Possibly to move quickly between trees, chase birds and other prey, or avoid predators, Socha says.

If snakes can take to the air, can pigs be far behind?