A look at some of the world's most unusual animals 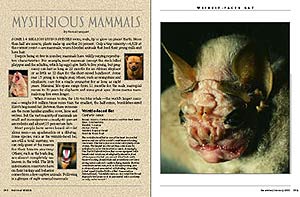 SOME 1.4 MILLION living species swim, walk, fly or grow on planet Earth. More than half are insects; plants make up another 20 percent. Only a tiny minority—4,629 at the current count—are mammals, warm-blooded animals that feed their young milk and have hair.

Despite being so few in number, mammals have wildly varying reproductive characteristics. For example, most mammals (except the duck-billed platypus and the echidna, which lay eggs) give birth to live young, but pregnancy can last as long as 22 months for an African elephant or as little as 12 days for the short-nosed bandicoot. Some rear 15 young in a single year; others, such as orangutans and elephants, care for a single youngster for as long as eight years. Mammal life spans range from 11 months for the male marsupial mouse to 70 years for elephants and some great apes. Some marine mammals may live even longer.

When it comes to size, the 150-ton blue whale—the world’s largest mammal—weighs 9.6 million times more than the smallest, the half-ounce, bumblebee-sized Kiito’s hog-nosed bat. Between these extremes are the more familiar giraffes, cows, lions and wolves. But the vast majority of mammals are small and inconspicuous—nearly 40 percent are rodents and almost 25 percent are bats.

Most people have never heard of—let alone seen—a pademelon or a dibatag. Some species, such as the wrinkle-faced bat, are still a total mystery; we can only guess at the reasons for their bizarre anatomy. Others, such as the bush dog, are almost completely unknown in the wild. The little information scientists have on their biology and behavior comes from a few captive animals. Following is a "glimpse" of eight unusual mammals. 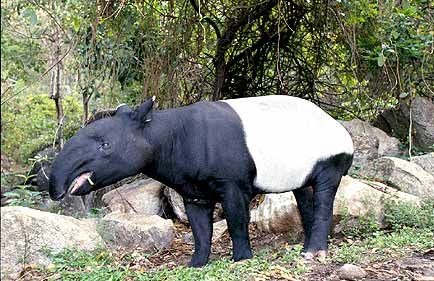 Related to horses and rhinos, the shy, primitive tapir belongs to an ancient lineage that first appeared some 20 million years ago. In Indonesia, tapirs and rhinos are both referred to by the same name, and the tapirs’ three-toed footprints are sometimes confused with rhino tracks. Tapirs have a short, fleshy trunk formed from the upper lip and nose. They use this fingerlike projection to sniff their way through the forest and to pluck leaves and shoots. Heavy as a horse, tapirs are also remarkably agile. They can climb steep slopes and run fast through difficult terrain. They also swim well and often wallow in water or mud. The leathery skin on the back of their head and neck is nearly an inch thick, presumably to protect them from attacks. 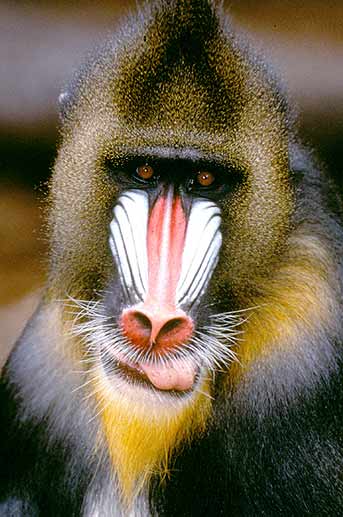 His face vibrant with color, a dominant male mandrill is a surreal testimony to the power of testosterone. Hormone levels four times higher than lower-ranking members maintain the dominant male’s scarlet nose, ridged electric blue cheeks and golden beard. To complete the effect, the rainbow colors of his face are echoed on his genitals. These powerful, heavily built members of the baboon family are highly social. A dominant male, his harem and their young roam the forest in search of food. Several family groups sometimes join together to form a horde of several hundred animals, which keep in contact with a continuous chorus of barks, grunts and crowing calls. 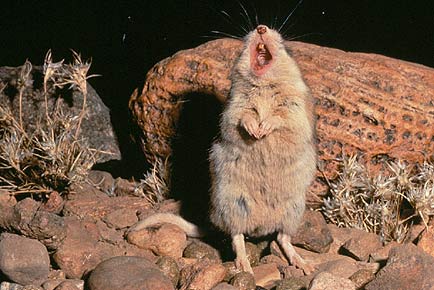 This ordinary-looking rodent is really a "wolf in mouse’s clothing." Known to be fierce predators that ambush grasshoppers, lizards, scorpions and beetles, these stocky little mice are carnivores in terms of physical characteristics and behavior. They have unusually long fingers and claws for grasping prey and sharp, shearing teeth and enlarged jaw muscles for biting and chewing. Like wolves, coyotes and other large carnivores, grasshopper mice roam large territories that they maintain by scent marking and vocalizations. Male grasshopper mice even howl like tiny wolves. Standing on their hind legs, they throw their head back and give a distinctive, high-pitched call. The shrill, eerie vocalization is audible to human ears for 100 yards or more. Unlike most rodents, male and female grasshopper mice cooperate to raise their young. This may be because, like all predators, the young mice need to be taught how to hunt and kill prey.

The wrinkle-faced bat is one of the least known bat species and one of the world’s most bizarre-looking mammals. This bat’s face is covered with fleshy folds of skin. The largest is a throat flap, which can be pulled up to cover the face like a mask. Amazingly, this Darth Vader-like face flap comes equipped with translucent windows, strategically placed in front of the eyes so the bat can see out. Most bats with bizarre-looking facial folds and projections use them during echolocation to capture flying insects. But the wrinkle-faced bat eats fruit so its odd-looking face is obviously not associated with feeding. According to bat expert Merlin Tuttle of Bat Conservation International, "Scientists have no clue what the throat flap is for but presume it is associated with courtship as only males have it."

As ephemeral as butterflies, male marsupial mice live for one short season, mate and then die. During the winter, males and females spend the day in communal nests, emerging at night to forage for beetles and cockroaches. As winter progresses the males become increasingly aggressive—their staccato chee vocalizations are heard day and night as they battle for mating rights. At the end of the two-week breeding season, not a single adult male is left alive. Scientists believe that the stress of mating keeps the immune system suppressed, making the male mice susceptible to a variety of parasites and bacterial infections.

Short legs, a thick-set body and distinctive raccoon-like facial markings make the raccoon dog one of the strangest members of the dog family. Though scientists believe these odd-looking creatures are distantly related to foxes, they are quite un-doglike. For example, raccoon dogs cannot bark and they hibernate like bears during the winter. Typically, raccoon dogs have seven or eight pups but have been known to give birth to as many as 16 in a single litter. Both parents care for the young. The species is widely hunted and farmed for its pelt. In the 1920s, it was introduced into western Russia, with the hope of creating new fur producing populations, and they quickly spread throughout much of eastern Europe.

Built like a heavy-set dachshund, the South American bush dog is one of the world’s most mysterious canids. Almost everything that is known about this strange short-legged dog comes from the study of a few captive individuals. Bush dogs swim well and can dive and swim underwater with ease. They communicate with one another with birdlike whistles and chirps. In captivity, males and females maintain strong pair bonds, and males are attentive fathers. They help rear the pups, sharing food and grooming chores. Occasional sightings of wild bush dogs suggest that they are highly social and probably live in packs of two to five animals.

The okapi was unknown to zoologists until 1900. With only skins to go on, early explorers first thought this exotic-looking creature was a new species of horse but later found that it was more obviously related to the giraffe. Like giraffes, okapis have an 18-inch prehensile blue-black tongue used to pluck leaves from bushes and trees. The okapi’s brownish black coat and sharply contrasting zebralike stripes make it almost invisible in the sunlight and shadows of the dense forest. This primitive, specialized forest-dweller has been protected since 1933, but the commercial bush meat trade now threatens its continued existence.