When it comes to intelligence and personality, the giant Pacific octopus shines 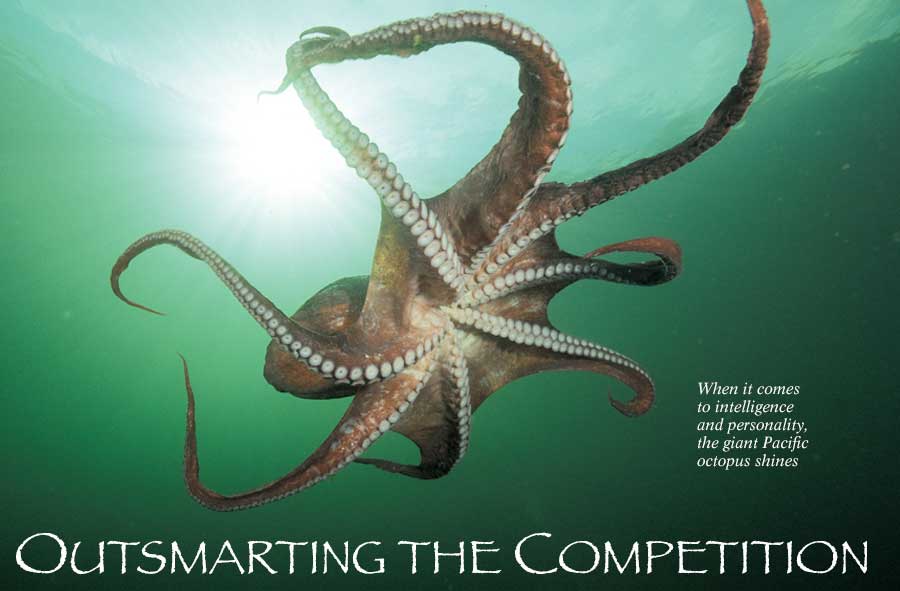 IT IS AFTER SUNSET in the choppy winter waters off Vancouver Island, in British Columbia. Two scuba divers, Jim Cosgrove, chief of biological collections at the Royal British Columbia Museum, and his wife Jeannie, swim through the chilly seas to a rendezvous with a giant Pacific octopus. Jim Cosgrove, who has studied these creatures for 30 years, is currently researching their nesting behavior.

The animal, a female, has settled into a cave that she selected after mating more than six months ago. There she laid her eggs, then gathered rocks and shells to seal off the den’s entrances to prevent crabs and fish from eating her offspring.

As the Cosgroves swim toward the cave, their hand-held lights illuminate the surroundings. Rockfish hover nearby, hungrily awaiting the emergence of the tiny octopuses, whose hatching is near. From thousands of eggs, each the size of a grain of rice, clouds of miniature octopuses will emerge. They are bursting with life even as their mother is preparing to die, something all females do after their young leave the den.

The female’s ability to select an appropriate den is just one sign of the giant Pacific octopuses’ unexpected intelligence. “In most cases they choose dens that are difficult to get into and have more than one exit,” Jim Cosgrove says. “But I’ve also seen them choose dens that were so wide open they appeared ridiculous. Yet they’ll go through the incubation process with no problems. They seem to know better than I do.”

The Cosgroves and other researchers have in recent years been documenting a surprisingly complex array of behaviors—even personalities—in giant Pacific octopuses. They are trying to understand how these unlikely creatures developed such traits. The evolution of intelligence is generally attributed to social behavior such as group hunting, and is associated with long-lived animals. But giant Pacific octopuses are loners and live only three to five years.

Giant Pacific octopuses have a life history strategy that Jennifer Mather, a scientist at the University of Lethbridge in Alberta, Canada, describes as “live fast, die young.” Says Mather: “You can either grow slowly, live a long time, accumulate resources and finally reproduce, which is what we do; or you can live a short time, grow fast and have your kids in a hurry before you get eaten.” The giant Pacific octopus chooses the latter.

There are about 289 species of octopuses in the world—the giant, not surprisingly, being the largest. Though they may grow as large as 600 pounds, most giant Pacific octopuses weigh less than 100 pounds. They are found in the coastal waters of the north Pacific from Japan to California. Though population estimates don’t exist, the species is considered to be in good condition. 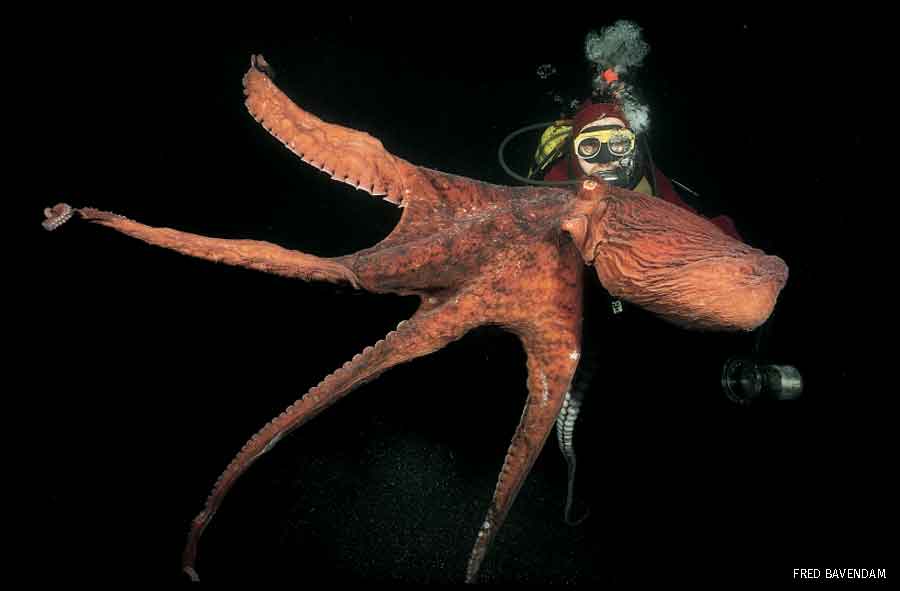 NO MERE MOLLUSK: Although related to slugs and snails, the giant Pacific octopus is no slacker. As researcher Jim Cosgrove (above, with a 70-pound adult octopus off British Columbia) and others have learned, these animals are clever and adaptable. Examples are the octopuses’ deft use of camouflage, ink clouds and other evasions, which allow the creatures to escape predators. Holding its prey with suction disks on its tentacles, an octopus consumes two crabs (below) by cracking open their shells with a parrotlike beak inside its mouth. Giant Pacific octopuses prey on a wide array of creatures, from shellfish to birds. The octopuses have devised a number of cunning strategies for getting their food: One waited near a ferry dock in Washington and grabbed birds that came to feed.

Outwardly, this species is just a large version of its relatives. Its body, called the mantle, looks like a bag, and moves as the octopus breathes. It exhales out of a tube called a siphon, which it occasionally uses as a water jet. Inside the mantle are the stomach and other organs, including three hearts. Its head rests between its body and arms. It has eight arms lined with suckers that can taste as well as touch and grab. Scientists have recently found that half of the animal’s nervous system is in its arms, which can operate without signals from the brain.

Though octopuses are mollusks—the same taxonomic group as clams, slugs and snails—they have more complex brains than their relatives and any other invertebrates (animals without backbones). Scientists believe octopuses are more intelligent than any of the fishes, though not as smart as most mammals.

Most observations of octopus intelligence have come from captivity, since divers can’t normally stay down long enough to observe complex behaviors in the wild. Roland Anderson, curator at the Seattle Aquarium, says giant Pacific octopuses held in their tanks will invert their bodies, exposing their suckers upwards—much like a human panhandler begging for spare change—when they want food. If it isn’t delivered, they’ll swim back and forth in their tanks, turning red, “possibly the only example of an invertebrate showing emotion,” he says.

At the Seattle Aquarium, volunteers tend to give only octopuses, seals and sea otters names, as only these animals exhibit the prerequisite personality. The aquarium has had several personable giant Pacific octopuses. There was Leisure Suit Larry, named after a playboy character in a video game. “He was always trying to feel everybody up,” says Anderson, and he wouldn’t hesitate to reach out of the tank to do this. There was also Emily Dickinson, who hid behind the tank’s backdrop and could barely be coaxed out. And there was Lucretia McEvil. “Volunteers shied from feeding her because she would try to pull them down into the tank,” says Anderson. 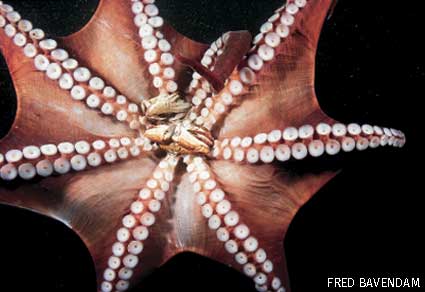 Anderson believes the evolutionary pressure for giant octopuses’ personality (a unique set of behavioral and emotional responses to stimuli) comes from their early life history, when they drift to many different habitats to make a home. “The octopus that settles out on a rocky shoreline has to learn to find different prey and avoid different predators than the one that finds its home under the only rock on a sandy bottom,” says Anderson. “Without the ability to become different—the essence of personality—they won’t survive.”

These octopuses are found from the shoreline to depths of 600 feet. David Scheel, a biologist at Alaska Pacific University, studies giant Pacifics in Alaska and finds that most occur in near-shore waters in depths less than 33 feet. It’s a complex environment that presents a predator with many mental challenges. Scheel found that octopuses eat a wide variety of foods including shellfish, snails, crabs, shrimp, fish, scallops and even birds.

An octopus can dig for clams by using its siphon like a hose to blow away sand and gravel. One octopus in Washington caught seabirds by waiting under a rock near a ferry dock and grabbing birds that came there to feed. The creatures can also reach out and snag fish as they pass by.

Getting food is one mental stimulus for a giant Pacific octopus. Another is not getting eaten. It’s a tough test of intelligence that generally only two out of every 57,000 young (the typical size of a female’s egg mass) will pass. “If they were all surviving,” says Cosgrove, “you’d need a snow-plow in the front of your car to get the octopuses off the street when you went to work in the morning.”

In general, giant Pacific octopuses are preyed on by animals that are fast and hunt by sight: sharks, large fishes, seals and other octopuses. To avoid being eaten, they have to use their heads. “They don’t have claws, teeth, shells or spikes to protect them. All they have is their smarts,” says Mather.

To escape predators, an octopus can grab onto and blend into a reef by matching its color and even its texture. Says Cosgrove: “There have been times when I knew the octopus was there, but my eyes would not see it. I literally had to pat the bottom—thump, thump, squish—before I could find it.” The animals change color by expanding or contracting cell-sized sacs of pigment under the skin called chromataphores.

An octopus may also use its siphon like a jet to get away from enemies—and it can travel many miles using this propulsion. The creature can also squirt ink into the water to block a predator’s view or serve as a decoy. Scheel describes chasing one octopus into a kelp bed, where it grabbed onto the kelp and turned the plant’s color and texture. Hoping to collect the animal, Scheel reached for a bag he had attached to his belt, taking his eyes off the octopus for a second. “When I looked back up, he was gone, and there was just a little ink cloud hanging in the water,” says the scientist. “He’d waited until I wasn’t looking at him until he bolted. They are pretty smart animals.”

Their craftiness doesn’t save them, however, when love is concerned. Giant Pacific octopuses typically mate at about two and a half years of age. Females probably release an attractant, Cosgrove says, that lets males know when they are receptive. Mating ensues with little fanfare or courtship, as the male extends a specialized arm into a female’s mantle and slowly delivers a sperm packet into her oviduct.

“There’s no such thing as safe sex for a giant Pacific octopus,” says Anderson. After mating, “males go into a state of senescence much like Alzheimer’s. Their body and brain deteriorate and they stop eating. Females go off and guard their eggs for six months but die shortly after the eggs hatch.”

In the den, the female grooms her eggs with her tentacles and blows water at them with her siphon to keep them free from bacteria, fungi and algae. Then in a single night she’ll blow all her offspring out of the den in clouds of babies. Shortly thereafter, she’ll expire, often close to the den.

The world these juveniles enter is a rough one, since they’re unprotected and tasty morsels for nearly everything in the sea. If they survive, they’ll drift with the currents over the next several months. The lucky ones will settle to the bottom, to match their wits with the prey and predators there. And perhaps they’ll become the next Lucretia McEvil or Leisure Suit Larry.