In Papua New Guinea, native cultures and species may need one another to survive in a rapidly changing world 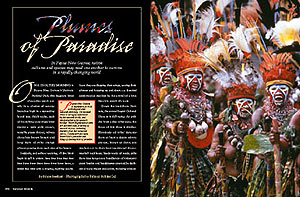 ON A COOL July morning in Papua New Guinea's Varirata National Park, five Raggiana birds of paradise perch quietly in a cluster of canopy branches high in a spreading laurel tree. Adult males, each of the striking crow-sized birds sports a pale gold crown, metallic green throat, velvety chocolate brown breast and long train of silky orange plumes growing from each side of the breast.

Down the road from Varirata, the annual Sogeri Cultural Show is in full swing. As with the birds a few miles away, the focus of this show is display. Hundreds of tribal dancers from at least a dozen ethnic groups, known as clans, are decked out in their best traditional finery: seashell necklaces, beads made of seeds, pelts from tree kangaroos, headbands of iridescent green beetles and headdresses crowned by feathers of many shapes and colors, including plumes of several of the country's 34 bird of paradise species. Chanting, swaying and stamping their feet, the dancers are reminiscent of those magnificent animals. Like the birds, they seem to be declaring, "This is who I am, and this is where I'm from."

In characteristic yellow face paint, a Huli wigman wears a human-hair wig adorned with feathers from a variety of birds, including the sulfur-crested cockatoo (right).

The proximity of avian and human display is fitting. Papua New Guinea, the eastern half of the South Pacific island of New Guinea, is renowned for both its biological and cultural diversity. Largely blanketed by forests--80 percent of which are still standing--the nation is home to more than 700 bird species, 200 mammals (primarily marsupials, bats and rats) and some 10,000 higher plants (including 2,000 kinds of orchid). Due to the island's isolation and highly varied geography, many of these plants and animals are found nowhere else on Earth. Nearly a quarter of Papua New Guinea's mammal species are endemic, as are 77 birds and half of all amphibians. Unusual creatures unique to the island include the world's longest lizard, smallest parrot and largest pigeon, butterfly and stick insect.

Isolation and rugged terrain also contributed to development of diverse human cultures. Papua New Guinea, in fact, is considered to be the most ethnically diverse nation in the world, with more than 800 distinct languages still spoken today. Throughout history, the traditional lifestyles of these varied peoples have been influenced and inspired by the natural world that surrounds them, and especially by the island's marvelous birdlife.

Some clans are so closely allied with certain birds that members can be distinguished from those of another solely by the feathers they wear. The Biagge clan, for instance, is known for its halolike headdresses of red, yellow, orange and green lorikeet feathers. The Nomad people decorate their headdresses with orange flank plumes from Raggiana birds of paradise. Huli wigmen also don Raggiana plumes, but are distinguished as well by hornbill beaks worn on their backs and by elaborate human-hair wigs decorated with feathers, flowers and other natural ornaments.

Looking more closely, one sees dozens of additional details and fine touches that are part of these costumes--the color of pigment applied to the face (Huli wigmen use bright yellow), type of clothing (or lack of clothing), application of pig grease to the body, noise-making anklets and bandoleers of beads, dog's teeth or pig tusks. Going a step further, many clans identify so much with the birds and other animals whose parts they wear that members not only dress but also dance in customary imitation of these species as an effort to evoke their beauty, strength and power.

A newcomer to Papua New Guinea might assume that so many people wearing so many animal plumes and pelts would quickly decimate the country's endemic wildlife. Not so. For one thing, tribespeople don their traditional finery only on very special occasions--cultural shows like the annual Sogeri event or sing sings, festive all-night song and dance sessions that mark important village events such as weddings, adolescent initiation rites and, these days, even the blessing of a new church. More important, these customary natural adornments, which are considered valuable heirlooms, are harvested with care and preserved and worn by clan members for many years.

Indeed, it is forces beyond the country's borders that pose the real threat to Papua New Guinea's unique ecosystems and species. The nation, whose population until recently relied almost exclusively on local subsistence, is now undergoing rapid development and conversion to a global cash economy. As part of the process, many foreign companies that have depleted natural resources elsewhere are turning to the island's rich reserves of timber, oil and minerals such as gold and copper. Between 1975 and 1996 alone, some 7.4 million acres of forest were lost to industrial logging conducted by multinational corporations. Mining operations, meanwhile, have flooded forests, silted rivers and spewed toxic pollutants such as cyanide, mercury and ammonia into important watersheds.

Such massive environmental degradation harms both native species and the indigenous peoples who rely on these plants and animals, not just for special-occasion costumes, but as sources of everyday medicines, food and building materials. Yet local human populations, who by law are the recognized owners of most of the country's land and water, also offer the best hope for protecting such resources in the future--as long as cultural traditions that value the natural world can be conserved as well.

An expert on the birds and rain forests of New Guinea, biologist Bruce Beehler is vice president of Conservation International's Melanesia Program.