Flying high with whoopers in Wisconsin 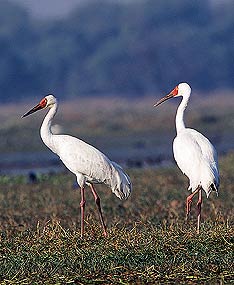 HE’S NOT GANGLY and his neck isn't particularly long, but that didn't stop a crane from falling for him. Twenty years ago, George Archibald danced with a captive and rare whooping crane to entice her to breed. The bird—hopelessly imprinted on humans—laid four eggs, hatching Archibald into an ornithological legend. Now the species has him dancing again—this time, to celebrate the return of migratory whooping cranes to Wisconsin after their absence east of the Mississippi for more than a century.

A jubilant Archibald was watching the sky last April as a small flock of captive-raised whoopers glided toward reclaimed summer grounds at Necedah National Wildlife Refuge in south-central Wisconsin, the wetland where the birds had fledged the previous fall.

They were returning from their new wintering grounds on the west coast of Florida, 1,200 miles south at the Cassahowitzka National Wildlife Refuge, a place where pilots had led them in October 2001. Because cranes learn migratory routes from their elders—unlike songbirds, which are genetically programmed to migrate using celestial and magnetic cues—these whooping crane pioneers learned the route by following three ultralight airplanes, outfitted with crane puppets to look like their parents.

"It took 20 years of hard work to make this happen," says Archibald, "but it's done. They're back."

Habitat destruction and hunting reduced whoopers, rarest of the world's 15 crane subspecies, to about 20 birds by 1941. Today in the wild they number about 280, and for decades there's been only one migratory flock, flying between Canada and Texas. The only other wild whoopers—their migration route long forgotten—were reintroduced into Florida in 1993, where they took up year-round residence. "The return of the whooper to the Eastern Flyway gives me faith we can ensure the future of other endangered cranes," says Archibald.

His spirits are elevated on this wilting summer afternoon by an early morning encounter with the migratory whoopers at Necedah. It's the first time this life-long "craniac" has glimpsed wild whoopers on the ground in Wisconsin.

Hidden behind a blind in this re-stored savanna, a spellbound Archibald watched as a ravaged ecosystem again became whole: Amid endangered Karner blue butterflies, repopulating red-headed woodpeckers and the howl of a wolf was added the unison call of the whooping crane, the clamoring duet between mating pairs. Says Archibald, with fatherly pride: "They sounded like teenagers practicing."

A Nova Scotia native, Archibald grew up loving the outdoors and wildlife. His fascination with the tallest flying birds on Earth began when he first saw and heard sandhill cranes during a summer job in Alberta. "Something about them touched my spirit," he says. "I became fascinated with the posturing and vocalizations of all cranes. Their behavior and communication is so complex, almost humanlike."

He found out how humanlike in 1982, when a crane named "Tex," hatched in captivity at a time when there were fewer than 50 whoopers alive on the North American continent (the only place they exist), insisted that only Archibald was worthy of courting her. For six cold Wisconsin weeks, he spent 15 hours a day with her in her shelter, and when she asked him to dance like a love-struck whooper—leaping, bowing, strutting, throwing sticks in the air-he obliged.

But Gee Whiz, which sired 12 chicks of his own, doesn't share the bond his mother had for his surrogate father. "He hates me," says Archibald. "He doesn't like anyone, but he especially hates the people he knows. I feel like a rejected parent."

He's joking, obviously. Then again, in the light of what was this day's dawn, if a wild whooper at Necedah had sounded its bugle call and taken flight for a swoop around the swamp, it's not so hard to imagine that another "rare bird"—one who has spent his lifetime in the service of cranes—might have at least dreamed of joining in.

Heidi Ridgley is an associate editor.


Web Exclusive
More Journeys with Cranes
The successful reintroduction of migratory whooping cranes to the eastern flyway is renewing hope for other imperiled crane species, such as the Siberian crane, which is one of the world’s most endangered.


Like the whoopers, Siberian cranes (right) travel tremendous distances between their summer breeding grounds in Siberia to India, Iran or central China—between 3,100 and 3,700 miles—and through up to 14 countries. Realizing international cooperation is an absolute necessity, the International Crane Foundation (ICF) began working with Russian, Indian and Japanese researchers in the early 1990s to pinpoint habitat areas crucial to the cranes’ survival.

The most specialized of the world’s 15 crane species, Siberian cranes have a serrated bill to help them grasp slippery prey—invertebrates, frogs, mollusks and fish—that the birds can find only in wetlands. The bill also helps them grasp tubers, the small, starchy swellings on the roots of some marsh plants. Without wetlands, which are often threatened by development, oil exploration and dams, the birds can’t survive.

But habitat destruction—the main problem for the 3,000 or so birds that make up the east Asian flock—is not the species’ only threat. For the vanishing west Asian flock—numbering only between 7 and 11 birds for the last decade—and the central Asian flock—dropping from 200 birds in 1965 to a single pair in 2002—the primary threat is hunting along its migration route, which includes Russia, Iran, Pakistan and war-torn Afghanistan.

Making matters worse, captive breeding is difficult. But with collaboration between ICF and the Oka Crane Breeding Center in Russia, more than 100 Siberian cranes are breeding in captivity, and since 1991, scientists have been releasing birds to help rebuild the wild flocks in central Asia. Similar to reintroduced whoopers, released Siberian cranes learn their migration route with the help of humans. In Asia, a hang glider shows them the way.

“These ongoing, cooperative efforts give me faith that the Siberian crane will survive,” says IFC founder George Archibald. “It took 20 years of hard work before I could see the whooping crane migrating again between Wisconsin and Florida. For the Siberian crane, it’ll take at least that many more years of hard work to ensure a safe flyway. But where there’s a will, there’s a way.”—Heidi Ridgley