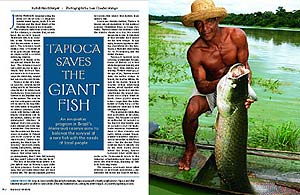 JORGE TAPIOCA crouches along the shore of a small lake—a stagnant, isolated inland lagoon, really. It is late October and the flood forest of the Brazilian Amazon is in ebb season.

The muscular fisherman waits quietly for the pirarucu, a creature that, as perhaps the world’s largest freshwater fish, may equal him in size. Tapioca knows that the encounter is imminent. The pirarucu must surface every 15 minutes or so to gulp oxygen through an organ called a cellular swimming bladder.

Plaptch! A ribbon of silver and red breaks the surface. The pirarucu needs just a split second to take a breath. And that’s all Tapioca needs to do his work: judge the fish’s size, weight and age; maybe even its sex.

Tapioca is one of a team of aquatic census-takers taking part in an innovative experiment in Mamirauá Sustainable Development Reserve in the Brazilian state of Amazonas. The data he and his colleagues compile will be used by the local fishers’ association to negotiate an annual pirarucu catch quota with federal officials. Nearly everywhere else in Amazonas, fishing for the endangered pirarucu is banned. But even government officials admit the ban is ineffective: They have neither the money nor the manpower to enforce it. Fishers just move catches to the black market. "Under management, the fishers take 30 percent," says José Maria Batista Damasceno, fishing engineer for the Mamirauá project. "But if they have to go underground, they’ll take 100 percent, and they won’t bother with the size limits."

The idea of the Mamirauá system is to give fishers such as Tapioca a legal outlet for their pirarucu. Partly because it is legal, they get better prices than for black market fish. The species arguably gets better protection under this system than under a ban.

Like many riverine natives, Tapioca is known almost exclusively by his informal moniker. Christened Jorge de Souza Carvalho, Tapioca earned his nickname after the starchy staple as a boy: He would always stick close to his elders as they prepared their canoes for the next voyage. By age eight, he was a regular on fishing excursions for the tambaqui, a fruit-and-seed-eating 50- to 70-pounder, and the prized pirarucu. 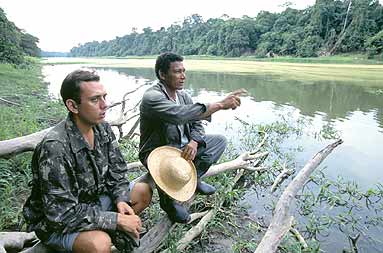 COUNT ON ME: Biologist Leandro Castello (left in image) learns the technique of counting pirarucu from Raimundo da Costa Cordeiro. Cordeiro, Tapioca and other local fishermen can judge the size, weight and age of a pirarucu from just a brief glimpse when the fish comes up for air. This traditional "eyeball" count gives results that are 99 percent accurate, Castello says. These data are used by government officials to set annual catch quotas for the fish.

Tapioca’s parents were caboclos, westernized Amazonians of Indian or mixed white-indigenous descent, and they lived from fishing and farming. Thirteen years ago, at the age of 24, Tapioca moved from his native village to Jarauá, the leading fishing village in the region. Jaraua is located within Mamirauá reserve, which together with bordering parks and reserves constitutes the largest protected block of rain forest on Earth. Some 20,000 square miles—larger than the entire nation of Costa Rica—of the Amazon are protected in this complex of refuges.

The impetus for protecting this ecosystem is its abundance: The Amazon contains an estimated 10 percent of the Earth’s biodiversity and 20 percent of all its fresh-water resources. Representatives of this diversity are easily visible around Jarauá. Dozens of fearsome caiman— crocodiles native to the Amazon—line the shores. Pink dolphins leap in tandem out of the dark water. Deep inside the forest, howler monkeys blast forth their eerie calls. Cormorants perch in the branches of half-submerged trees. Egrets prowl the water’s edge, snapping up fish with their long beaks.

The presence of so many birds offers evidence of their main food source—the plentiful life below the water’s surface. More than 300 species of fish are believed to inhabit the underwater world of Mamirauá. One, the aruanã, is famous for leaping out of the water to catch insects—often ending up on the decks of small boats. Another is the pirarucu.

Pirarucu is a word from the Tupi language of Brazil and translates roughly as "red fish," a bit of a misnomer since only the hind part of its body is truly red (though the red part seems to increase during mating season). The fish is also found in many other parts of the Amazon basin, and its name varies by region, although it is often referred to as piache or arapaima.

An average adult will measure six feet and weigh about 200 pounds, but the creatures can grow to 13 feet in length and a hefty 400 pounds or more. Pirarucu spawn in the spring and build nests in the river bottoms. "The nest is 70 centimeters long and 25 deep. It is just a hole," says Tapioca, who worked as a research assistant for a nest study. The male protects the fry, drawing offspring into his flat, elongated mouth if predators become too insistent.

Like some other tropical freshwater fish, the pirarucu comes to the surface periodically to gulp air to supplement the oxygen it receives from the water. The pirarucu might surface brabo (angry) or manso (tame) or dobrado (doubled over); local fishers have a whole vocabulary to describe its breathing styles. But no matter the style, the pirarucu will always surface. It can survive for as long as 24 hours outside the water but death occurs in one hour if it isn’t able to come up for that gulp of air.

Air-breathing offers the aquatic giant a neat competitive edge. Low oxygen levels are common in the Amazon, especially in torpid, algae-covered lakes in low-water season. Pirarucu often find themselves confined in such places for the duration of the dry season. Many gill-breathing fish held in such temporary captivity respond by ratcheting down their metabolisms. So the Amazon’s oxygen-charged underwater predator can get a jump on some of its smaller, otherwise more agile prey. (It feeds on about 30 different kinds of fish, with a preference for catfish.) But surfacing for air also has a major drawback, as it gives the adult pirarucu away to its only real enemy—people such as Tapioca.

When Tapioca first learned to count pirarucu, fishers cared about only two kinds of information: where and how many. They’d sweep a lake, like clear-cutting loggers, fishing until their take nearly equaled the count. A pirarucu numbers cruncher, Tapioca took pride in confirming his estimate with the catch. "Once I counted 110 in a lake," he recalls. "I went fishing with a team, and we got 90. When we returned to the village, I told some guys that there were probably about 20 left. They went out the next day and caught 15."

Fishing was easy back then. Tapioca recalls when locals pulled in 50 tons of pirarucu in a single week. Another fisher, 41-year-old Arnaldo Daniel de Carvalho, cites older evidence: "My mother used to say that there were so many pirarucu that a guy would wake up and decide that he’d only bother to take 10 that day."

Catches started to fall in the 1970s. Arapaima gigas, as the pirarucu is known scientifically, was added to the Convention on International Trade in Endangered Species (CITES) endangered list in 1996. By 1998, fishers in Jarauá were getting 20 tons a season, estimates Leandro Castello, a fish biologist at the Mamirauá Reserve. But even that proved too much: This year the Brazilian Environmental Institute (IBAMA), a federal agency, allowed a quota of five tons in Mamirauá.

Though they took more fish to market in the old days, villagers didn’t necessarily come home with more cash. Saddled with perishable goods, they’d unload to middlemen for the equivalent of about 14 cents a pound. In 2001, the four bulk buyers paid ten times as much—about $1.45 a pound—to the Jarauá fishers association for their legal quota.

Pirarucu fishing is limited to a span that lasts just a few weeks. The fish can only be caught effectively during the lowest of the low-water season, when many are confined to the lagoons. When waters rise, the creatures disperse. This natural seasonality helped the pirarucu evade extinction. Also helpful is the fact that it is almost impossible to run an industrial-sized net through flood forest waterways riddled with tree branches and trunks. Nets would be torn to pieces.

Pirarucu fishers work in teams. They lug small canoes through dense forest. At the lake, men trail fish one at a time. They’ll use gillnets to confine their prey, but invariably kill the fish with a spear. Sitting or standing in their canoes, fishers mark the spot where the pirarucu last surfaced. They wait another 15 minutes—spear always at the ready. When the time comes, the fish often pops up out of range, or at a weird angle. Even when they do get off a shot, misses are more common than hits. The most essential trait of a pirarucu fisher is patience.

When a fisher scores, he reels in his animal. The still living fish needs a coup de grace—a knock on the head with a machete. Victory doesn’t induce arrogance in the hunter, however. "The pirarucu is intelligent," says Tapioca. "Man can only catch it because it ends up in the lake and can’t escape."

But respect for the fish doesn’t translate into protection outside Mamirauá. There, illegal fishing continues, though most observers agree the catch is dwindling—more from lack of fish than a law-abiding spirit. Contrast that with numbers from the Jarauá region. About 360 adults were counted in 1999. Local fishers got permission to take one-third of them, yet the number of adults increased to almost 1,000 in 2000. After another year of controlled fishing, the population of adults rose again to about 1,440 in 2001.

Government officials say this program may serve as a model for the intelligent use of increasingly scarce fisheries resources throughout the Amazon and beyond. "The experience of pirarucu management in Mamirauá is working," says José de Anchieta dos Santos, director of wildlife and fisheries resources at IBAMA. "Maybe it can be extended to other species."

A former correspondent for Business Week, Brazil-based writer Bill Hinchberger now spends much of his time in the Amazon. He and Brazilian photographer Luiz Claudio Marigo traveled to Mamirauá for this story.