Endemic to parts of the West, a contagious brain disorder called chronic wasting disease has moved east of the Mississippi


LOOKING at these animals, you'd never think they had a brain disease," says University of Wyoming wildlife veterinarian Elizabeth Williams. "A nutritional problem maybe, or exposure to a toxin, something like that." The deer in question stand in a research center holding pen, skinny to the point of emaciation despite their well-stocked feeding troughs. Front legs splayed, heads and ears lowered, they drool. They pee a lot. When goaded to walk, they stagger and their bellies slosh.

But there's nothing Williams can do for them. Whether they succumb quickly or simply waste away over weeks to months, every deer in the pen will be dead before the season is out.

These deer, like hundreds of others in at least 11 states and 2 Canadian provinces, have chronic wasting disease. First observed among captive deer in Colorado during the late 1960s, the disorder had researchers confounded for a decade. Then, in 1978, Williams examined a slice of autopsied brain tissue from one of the fatalities. What she saw were microscopic holes typical of transmissible spongiform encephalopathy, a class of fatal diseases that includes scrapie in sheep, bovine encephalopathy (mad cow) in cattle and Creutzfeld-Jacob Disease (CJD) in humans. 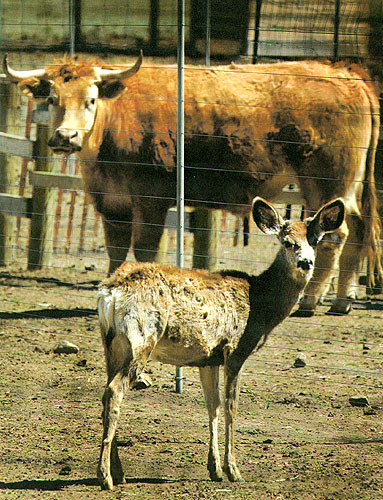 MAD DEER DISEASE? Last fall, chronic wasting disease appeared unexpectedly in Wisconsin deer, after apparently being confined to the West for decades. The discovery sparked fears that the illness would explode in the more deer-crowded East, or that it could infect livestock. Yet studies of cattle kept in pens with infected deer in Colorado (above) so far show that the cattle do not get sick. Other studies have failed to find evidence of chronic wasting in the muscle tissue of infected deer and elk, quelling fears that people who eat the meat of sick animals could get ill themselves.

After Williams' discovery, chronic wasting continued to crop up in Colorado and Wyoming, where it was a low-key issue of interest primarily to wildlife managers. All that changed last year, however, when the illness was found in Wisconsin—its first known appearance east of the Mississippi River. The finding sparked fears that what's been called "an epidemic in slow motion" in the West could explode in the deer-crowded East.

At the root of such concerns is the agent that causes the disease. Scientists use the term agent because they're not talking about anything alive, like bacteria or protozoa, or even conventionally infectious, like a virus. After decades of study, researchers have traced all known forms of transmissible spongiform encephalopathy to a class of misshapen proteins called prions, a defect that interferes with protein function and seems to act as a template to convert other normal proteins into the misshapen form.

Worse, prions resist breakdown by enzymes that normally chop up and dispose of derelict proteins. Consequently, snarls of mutated proteins build up, killing cells and creating microscopic holes that give the brain a spongelike appearance. Outward signs include a progressive loss of mental and physical function that ends in death.

Endemic to North America, chronic wasting disease infects mule deer, white-tailed deer and elk. The vast majority of victims roam an area spanning northeastern Colorado and southeastern Wyoming, where 1 to 15 percent of the deer population and 1 percent or more of elk may be infected. Isolated cases have also turned up in captive or free-ranging deer and elk in Nebraska, Kansas, Oklahoma, South Dakota, Montana, Wisconsin, New Mexico, Minnesota, Illinois, Alberta and Saskatchewan. And no one knows where else the fatal disorder may be found. Last fall, wildlife managers in 43 states began testing for the disease.

Also unknown is the extent of the threat to wildlife. While some researchers fear that chronic wasting could decimate entire populations of deer and elk, "we've seen total eradication of a herd occur only in captivity," says Williams, "and only in situations where penned animals live crowded and confined to a small, contaminated area." By contrast, the disease has moved relatively slowly through wild herds, possibly due to low population densities. Colorado state wildlife veterinarian Michael Miller has seen a relatively slow expansion of the disease's endemic area along the border of northeastern Colorado and southeastern Wyoming since he began studying it in the late 1980s. He attributes this to the fact that deer and elk don't migrate over large distances.

That the disease has begun to crop up in far-flung places—from the western slope of the Rocky Mountains to east of the Mississippi—leads experts to suspect that in some cases it has been seeded by interstate transport of ranched elk and deer. From game ranches, the disease could spread to wildlife across fences, where free-roaming and penned animals often make contact. Officials have also documented instances of deer and elk escaping or being deliberately released from ranches with infected animals.

About the same time the disease appeared in the East, highly publicized reports of three Wisconsin hunters with CJD ignited fears that people could become infected by eating contaminated game—just as products from British cattle with mad cow disease led to a variant form of CJD that has killed some 135 people over the last 10 years. Since then, brain autopsies of the suspected victims showed that two died from other causes while the third had "ordinary" CJD, which occurs spontaneously in about one in a million people. Also reassuring, studies show CJD to be no more prevalent among hunters and venison eaters than the general public, nor more common in areas where chronic wasting disease has long been endemic.

Similar good news comes from ongoing studies of cattle kept in pens with infected deer and elk. While the deer and elk sicken and die, the cattle do not, even after more than five years in close contact. Yet given the mysterious nature of prions, no one can yet say for sure that chronic wasting can't jump to livestock and humans.

Such uncertainty has many people on edge, particularly wildlife managers feeling pressure from agricultural agencies vying for control over free-ranging herds. The threat of subverting wildlife needs to agricultural interests looms especially large after the Animal Health Protection Act was attached to the Farm Bill last spring, giving the U.S. Department of Agriculture authority to destroy as "pests" any wildlife that might directly or indirectly harm livestock.

"This poses a great danger to the entire tradition of wildlife management in this country," says NWF Senior Scientist Steve Torbit. "Instead of wildlife being managed by those trained to do so, we're seeing it turned over to agencies with no interest in conservation and no knowledge of wildlife except how to exterminate it to benefit agriculture."

In fact, wildlife managers argue that chronic wasting disease may be a classic example of the dangers that agricultural practices pose to wildlife. Given growing evidence that the disease may have been spread by unchecked transport of ranch-bred elk and deer, experts have called for an immediate, nationwide ban on interstate transport of the animals. Already, dozens of states have banned their import. "This may seem like a simple step," says Miller. "But it represents a huge departure—and improvement—from current practice."

So far, state wildlife agencies have taken a variety of experimental approaches to chronic wasting. Colorado, which has two decades' experience with the disease, continues to emphasize monitoring its prevalence and spread outside the original endemic area by targeted testing of deer and elk showing signs of the disease coupled with random sampling of animals killed by hunters. Wildlife managers also identify and eliminate small, infected herds and thin larger diseased herds. In addition, the state radio-collars deer and elk in the disease's original endemic areas, which enables researchers to both track migratory movements and kill exposed animals if they move into new areas.

Elsewhere, efforts to control or even eliminate the disease have proved more problematic and controversial. Last fall, officials in Wisconsin launched an aggressive campaign to wipe out 25,000 deer in a 411-square-mile eradication zone, as well as tens of thousands of deer in a ring around the zone. The policy ignited emotional protests both from hunters and conservation groups. Meanwhile, the discovery of infected deer in other parts of the state dimmed hopes that the measures could sweep the state clean. What's also clear is that Wisconsin's approach, essentially an experiment, would not be practical most places the disease is found, where tens of thousands of animals roam huge areas.

Meanwhile, the remote possibility that eating infected deer or elk could sicken humans has led to safety guidelines for hunters that include wearing rubber gloves when handling carcasses and removing organs such as brain, tonsils and spinal cord where prions tend to accumulate. To date, evidence of chronic wasting has never been found in muscle tissue. Still, in some areas hunters may submit heads for testing before eating their harvest.

The last thing wildlife managers want is a fear-related drop in hunting, which largely funds their agencies through license fees and is in many places the only effective way to control deer populations. Already, Wisconsin experienced such a drop last summer.

Today, few aspects of chronic wasting disease seem certain except that it will affect North America's deer and elk, to one extent or another, for a long time to come. Given the difficulties of fighting what is turning out to be a widespread but little understood disease, wildlife managers will need tens of millions of dollars for research, surveillance and control.

New Jersey journalist Jessica Snyder Sachs is a frequent contributor to this magazine.

To ensure the sound management of deer and elk populations infected by chronic wasting disease, NWF and its affiliates are urging a cautious, science-based approach. "We need to know a lot more about the fundamentals of this disease," says NWF Senior Scientist Steve Torbit. "We can't be ruled by fear." To promote this process, NWF cosponsored a symposium of the world's leading experts on chronic wasting last fall. Both the Idaho and Wisconsin Wildlife Federations also have sponsored conferences. In addition, the Colorado Wildlife Federation participates in a Governor's Task Force on the disease; the Montana Wildlife Federation has sought prohibitions against shooting captive elk and deer as well as licensing new game ranches; and the Indiana Wildlife Federation is fighting a proposal to transfer management of captive deer from the state's wildlife agency to its agriculture department.