The Strangest Creature I've Ever Met

In the central plains of Brazil, an encounter with a giant anteater leaves the author amazed and amused 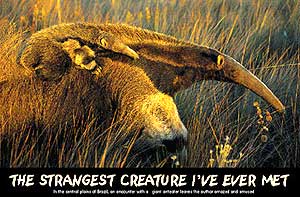 LONG BEFORE I ever saw one, I had read about the giant anteater. So I knew that it was one of the most unusual animals on the planet. Ranging throughout the warm, grassy plains of Central and South America, it is as large as a German shepherd yet its brain is not much bigger than a pea. It has a curved, tubular snout, a tiny puckered mouth with no teeth, and it devours ants and termites by the tens of thousands. It also has a body temperature that stays below 90 degrees F—colder than all other mammals.

Knowing these facts, however, did little to prepare me for my first encounter with one of the creatures during a trip to the central plains of Brazil’s Pantanal region. It was on a warm afternoon that I spotted a large, dark boxlike form shambling slowly across a grassy cattle field. Its gait was stiff and halting, as if injured, and its shape made no sense at all to me. Only when I got closer did I discover that I had fallen victim to the animal’s deceptive appearance: Its squarish profile was in fact carried by a slender frame—as narrow as a foot in some parts of its body—and a third of its ten-foot length was no more than a large pennantlike tail draped in course hair like the mane of a horse. Its puny head, tiny ears and minuscule eyes seemed dwarfed by its absurdly long, pendulous nose. And while its shaggy hindlegs were slim and wobbly with almost primate-shaped feet, its forelegs were thick and rigidly muscular, tipped with formidable recurved claws that forced it to shuffle on its knuckles with paws turned under. I soon realized that these observations were just the beginning of the surprises the giant anteater held in store for me. 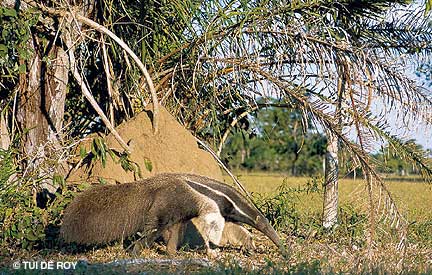 FAVORITE FOOD: In Brazil, a giant anteater walks past a mound of termites, one of the staples of its diet.

Slowly, I moved in for a better look, stepping gingerly through the grass. But as it turned out, I didn’t have to worry about disturbing the creature. With the wind in my favor, I moved to within 15 feet and he still didn’t notice me. A large male, he was busy doing what anteaters do best: eating ants. He had found a large underground nest of vicious fire ants. As I watched, he carefully inserted the huge daggerlike claw of his middle finger into the nest opening and deftly ripped up the ground with one easy slash, dirt and plant roots flying. The ants instantly retaliated with a massive counterattack: frenzied, acid-squirting swarms pouring out of the soil as though the earth itself was alive. But this only wetted his appetite. 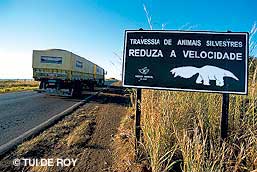 ACCIDENT VICTIMS: A road sign warns drivers passing through a plains region in Brazil to look out for giant anteaters. As new roads are built in areas where the creatures live, the near-sighted mammals are increasingly becoming victims of fast-moving vehicles.

Placing his tiny, pursed mouth directly over the hole he extended his sticky tongue into the seething melee, then pulled it back in liberally coated with insects. As the seemingly enraged ants kept pouring out of the nest, he continued to suck them up. I had read that he could do this about 160 times per minute, consuming some 30,000 ants at one sitting. His tongue looked like a giant purplish earthworm. But what I couldn’t see was that it is a full two feet long, set between tapered jawbones that are not fused in the middle and float freely to help in the pumping action that shunts the ants upward in a steady stream. The whole mechanism worked like a sort of natural vacuum cleaner nozzle powered by huge tongue muscles extending way down his throat and anchored to his breastbone.

To keep the feeding frenzy at a high pitch, the anteater was equipped with massive salivary glands—also stretching from his mouth to his chest—that provided extraordinary volumes of a gluelike saliva not found in any other mammal. He literally smothered the ants in slime, swallowing them whole for grinding between his reinforced, muscular stomach walls. Scientists guess that this saliva may help neutralize the fire ants’ powerful stinging bites, which can cause painful side effects in humans.

Incredibly, I watched all of this from just a few feet away, but the anteater’s vision is so poor he never noticed. Indeed, he seemed to be living in an olfactory world. As soon as the breeze shifted, he raised his head suddenly, nose in the air like a periscope, sniffing loudly, beady eyes trying dimly to size me up. The long, coarse hair on his back rose along with his tail, increasing his apparent size to warn me that, if cornered, he could inflict deadly damage to any predator with his formidable slashing claws or lethal piercing hug. But as I made no moves that might threaten him, he simply turned and half trotted, half stumbled about 50 yards until he sniffed out another ant nest and started feeding again. After a few minutes, he moved on to the next nest—and then the next. I couldn’t help but wonder: Why do anteaters always seem to seek food elsewhere when they appear surrounded by an inexhaustible supply? Are they actually husbanding their resources so as to allow the colonies to replenish themselves? 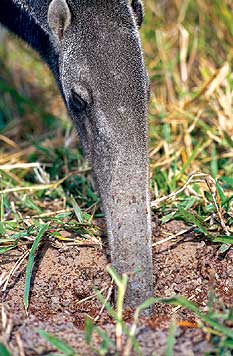 SUCTION POWER: The giant anteater has a two-foot-long tongue that it can thrust into an ant nest (above) an estimated 160 times per minute, sucking out thousands of the insects in the process. The anteater also has massive salivary glands that produce a gluelike saliva, not found in any other mammal, that literally smothers ants or termites.

As I later learned, these are some of the many mysteries surrounding giant anteaters. Among the other questions that scientists are seeking to answer: Are the creatures truly nomadic or do they have home ranges or territories? Why are anteaters always observed alone and why do they avoid each other? How long do they live in the wild? (In zoos, captive anteaters have been known to live 25 years or more.) Do pairs in the wild court or is mating just opportunistic?

One man who is determined to find some answers is Robert Young, a British biology professor based at Brazil’s Minas Gerais University in Belo Horizonte. "For a species that probably the whole world has heard of, we know surprisingly little about it," he says. "I really want to know how such a large animal can survive with such a small brain."

At birth, a baby anteater looks like an exact replica of its mother. But at less than four pounds, it weighs only about one-fifteenth her weight. Immediately after it emerges, the cub scrambles up onto its mother’s back. There, it will ride for five or six months, clinging tightly to her coarse fur as the pair amble through an environment that is increasingly fraught with dangers.

In recent years, much of the scrubby, grassy habitat giant anteaters favor has been cleared for agriculture, and new road construction is taking a heavy toll on the near-sighted animals, which frequently are unwitting victims for fast-moving vehicles.

Fire is an even bigger problem. Though its natural occurrence—started by lightning—is an integral part of a cycle of destruction and renewal that is typical to the savanna habitat where anteaters range, many land owners are setting fields ablaze with greater frequency these days to improve cattle pastures and clear unwanted scrub. With their poor eyesight, slow gait and highly flammable fur, anteaters often cannot escape such blazes.

As I watched the strange-looking beast move from ant colony to ant colony in the Pantanal that day, I wasn’t thinking about fire or motor vehicles or other threats he might face. I was too busy enjoying the experience. He was the strangest creature I had ever met, and I won’t soon forget the day I spent with him.