Treasures Beneath the Ice 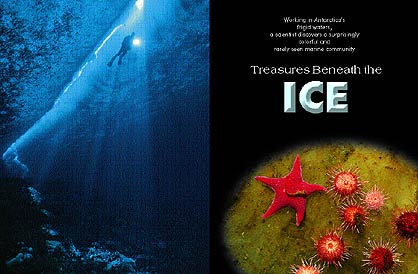 McMURDO SOUND in Antarctica is a place of shocking contrasts. In the sea under the ice exists an incredibly rich and colorful marine community: bright red sea stars, maroon urchins and a kaleidoscope of crazy-hued sponges; up above sits a monochromatic world of ice and snow and the dark volcanic rock of the still-active Mount Erebus. Small clusters of people--scientists and technicians mostly--live here in isolated outposts surrounded by thousands of miles of sterile yet fantastically beautiful landscapes.

As a scientist in the U.S. Antarctic Program, I first traveled to the region in 1995, funded by the National Science Foundation, to study the remarkable physiological adaptations marine organisms have evolved to exploit this frigid environment. I later returned several times with colleagues and photographer-filmmaker Norbert Wu to document the unique communities hidden beneath the ice of McMurdo Sound--a place seldom seen by human eyes. 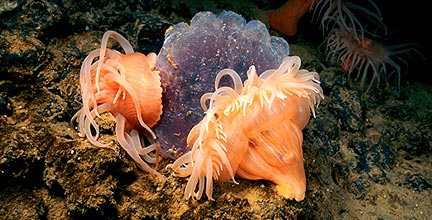 "Don't you get cold?" people ask me when they hear about my travels to a place where the sea temperature hovers at 28 degrees F--the freezing point of salt water. My answer is always an emphatic "Yes!" However, innovations in dry suits have made diving beneath this frozen corner of the world more possible. By wearing two layers of long underwear, a thick insulated jump suit, a dry suit (which protects with a form-fitting bubble of air) and two hoods covering much of the face and head, we can work beneath the ice for more than an hour and a half--in water that can kill an unprotected person in just a few minutes.

The only flesh exposed to water is a narrow strip of skin surrounding the mouth and lips, which burns at first but mercifully turns numb quickly. One critical problem is keeping hands warm and functional enough to manipulate the controls of cameras and scientific instruments. There is no perfect solution, we discovered, and despite a warm, life-sustaining body core temperature, our hands begin to ache within 30 minutes of submerging. After an hour, they downright hurt.

The sea in the 35-mile-long sound is covered by six to eight feet of ice. To explore the hidden communities in the water below, we use a tractor-mounted drill rig to cut a primary diving hole through the ice, along with one or two extra "safety holes" to provide additional exits should something happen to the main hole. For added luxury, we place a small diesel-heated fishing hut atop the primary diving hole, allowing us some comfort when we emerge from the water.

During our expeditions to more distant regions of the sound, we travel first by helicopter and then by snowmobiles to get across the ice to our destination. Once there, we search for seal breathing holes or enlarged cracks formed by the daily tidal flexing of the ice through which we can enter the water. Since we can't take along our heated hut on these outings, we have to shed our soggy gear after the dives and then make the long, cold snowmobile journey back to our base camp. Damp clothes freeze solid on these rides, turning us into rime-coated scarecrows and causing us to huddle in our tents trying to thaw over endless cups of hot chocolate and soup.

Antarctica can be a terribly dangerous place with the most fickle weather on Earth. Within a matter of minutes, clear skies can change into howling storms and whiteouts. On one occasion, we began a dive on a crisp, bright day and then resurfaced out of our hole a short while later into a raging blizzard that kept us pinned down for the next several hours. We were prepared to spend the night in our survival gear, but then, just as quickly, the storm stopped and we were able to return safely to base camp. 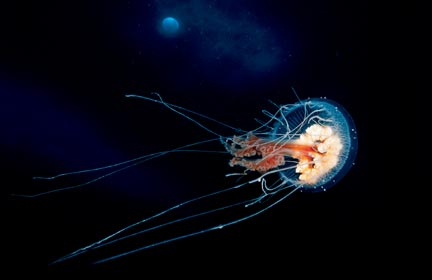 Diving in McMurdo is most spectacular after winter's 24-hour days of darkness end and the sound's waters, devoid of sun-loving plankton, are crystal clear. By then, most of the organisms under the ice are starving. To survive without plankton during winter, many organisms store nutrients and make use of a hyper-efficient metabolism until spring, while some organisms dissolve organic carbon directly from the seawater.

By the end of winter, the bottom-dwelling invertebrate community forms a hungry layer of waiting mouths. Sea anemones living on the bottom eat the drifting jellyfish that are unfortunate enough to be caught in currents that brush the shores. Crinoids, brittle stars, sponges and a lush community of other invertebrates ravenously filter the water for morsels. As summer progresses, 24 hours of continuous daylight powers a rich phytoplankton bloom, and the crystal clear waters of spring cloud with billions of microscopic plants and the animals that feed on them. The waters teem with life in an orgy of feeding before the continent again plunges into the long, dark winter. 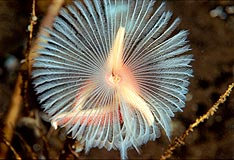 Needless to say, life on the sea floor is particularly harsh. The organisms that thrive best are those that seize any opportunity for a meal. For those creatures that can stomach it, a bountiful resource is provided by the activities of Weddell seals, the only large marine mammals that over-winter this far south. All winter long the 900-pound seals patrol for Antarctic cod and other fish beneath the ice, keeping their breathing holes open by raking the icy sides with their teeth. If the seals stop, the holes quickly freeze shut, dooming the marine mammals to suffocation. Without choice, they spend a majority of time directly beneath their breathing holes, and that is where their excrement concentrates. While diving, we often encountered dense tangles of urchins, sea stars, isopods, Pycnogonid sea spiders and six-foot-long Nemertine worms feasting on the wastes, prompting me to call the sound a "fecosystem," as these invertebrates, in turn, become nourishment for other creatures higher on the food chain.

I spent four seasons working on and under Antarctica's gardens of ice and aim to return. Like barren deserts and lonely mountain tops, the polar region has a strange effect on the human psyche. When I am not there, I miss its stark, brutal beauty. When I am there and under the ice, especially in places where fierce spring winds have blown the snow away and muted light illuminates hundreds of feet in every direction, I realize that nowhere else on Earth could I feel like such a tiny part of something so vast and miraculous.

Writer Dale Stokes is a scientist with the Scripps Institution of Oceanography in La Jolla, California.