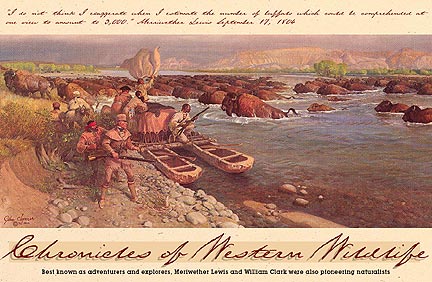 PICTURE BUFFALO grazing on the outskirts of Kansas City, Missouri, antelope bounding across a field in northeastern Nebraska, and wolves hunting just outside Sioux Falls, South Dakota. Thanks to the journals of Captains Meriwether Lewis and William Clark, we know that’s where these animals once roamed.

Two hundred years ago, when Lewis and Clark led the Corps of Discovery on an 8,000-mile journey across the American West, the territory teemed with wildlife. From the mouth of the Missouri River to its headwaters in the Rocky Mountains, down the Snake River and great rapids of the Columbia to the Pacific Ocean, the pair encountered a landscape so rich in fauna that today one can only imagine what it must have been like.

Celebrated as explorers and for their trail-blazing maps, Lewis and Clark also provided the first scientific descriptions of dozens of these wildlife species. Indeed, one objective of their 1804–1806 expedition was, in the words of President Thomas Jefferson, to note "the animals of the country generally, and especially those not known in the U.S." 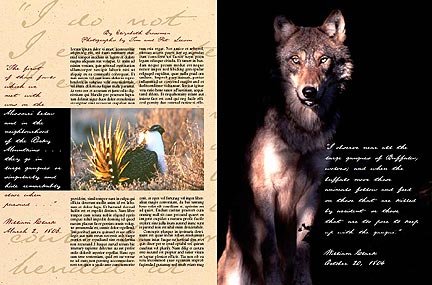 Enthusiastic and meticulous naturalists, Lewis and Clark faithfully carried out the president’s request. Throughout the two-year journey, they recorded detailed descriptions and careful measurements of plant and animal specimens they collected, including dimensions of wings and bones, numbers of scales on snakes and gills on fish—even the volume of a pelican’s pouch.

In the spring of 1805, the explorers also sent numerous crates of plant and animal specimens to Jefferson with a party returning east. The collection included "4 horns of the mountain ram," the "skins of Male & female Antelope" and "4 liveing Magpies." Today most of these specimens have been lost. The only remaining animal specimen, a single Lewis’ woodpecker, is housed at the Academy of Natural Sciences in Philadelphia.

Yet it was only relatively recently that Lewis and Clark’s contributions to natural history became widely known. Due to a series of circumstances—including Lewis’s death three years after the expedition ended—the first official edition of the journals, published in 1814, omitted many of the original wildlife descriptions. Though much of this information was published in 1893, the explorers’ evocative writing was not in circulation until the first unabridged edition appeared in 1904. And it was only in the 1960s that a thorough cataloguing of the journals’ natural history discoveries became readily available in books by historians Raymond Burroughs and Paul Cutright.

Many wildlife species have fared poorly since the explorers described them. Of the 122 animals Lewis and Clark identified for science, 7 are now extinct, and about 40 percent of the rest are officially protected by federal or state governments. More than half the animals inhabiting the range of Lewis and Clark’s travels are in serious decline, depleted first by overhunting and overfishing and more recently by habitat loss and degradation.

Yet thanks to conservation measures, some once severely depleted species, such as the cougar and pronghorn, are rebounding. And despite the enormous changes that have taken place over the past two centuries, there are still places along or near the Lewis and Clark Trail where one can see animals the explorers described.

In Montana’s Ulm Pishkun State Park, for instance, not far from where the Corps of Discovery portaged the Great Falls of the Missouri, it’s possible to drive to the top of an ancient buffalo jump. There, where walking trails circle the tabletop rise and prickly pear cacti dot the grass, is an extensive black-tailed prairie dog town. Late in the day, when the sun angles low and orange across the plains, the animals emerge from their burrows and stand to face the setting sun, chattering, whistling and rubbing their front paws.

Prairie dogs, or "barking squirrels," so intrigued Lewis and Clark that they included one among the specimens sent to Jefferson. Though the animal reportedly lost its appetite in transit, it rallied and arrived at Monticello alive. The species itself, however, has not been so lucky. Prairie dogs once inhabited nearly 100 million acres of Great Plains and prairie grasslands, but are now found only on about a million acres. Habitat loss and eradication, primarily by ranchers and farmers who believed the animals deplete livestock forage, have caused prairie dog numbers to plummet by more than 90 percent since Lewis and Clark first noted them. 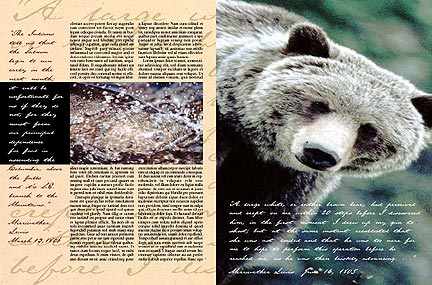 The gray wolf, another misunderstood species described by the explorers, also was persecuted to near extinction, but is rebounding in a few places it has recolonized or been reintroduced. The easiest place to see wolves these days is a two- to three-hour drive south of the Lewis and Clark Trail in Yellowstone National Park. A particularly good time to spot the predators is in winter, when their dark gray coats stand out against the snow and their howls echo through the frozen hills. If you’re lucky, you may spot a pack hunting with its pups.

In Montana’s Charles M. Russell National Wildlife Refuge, one can even witness the spectacular courtship dance of the sage grouse, which Lewis and Clark called "the cock of the plains." In early spring, the grouse gather at dawn on mating grounds known as leks. Striking brown, black and white birds, the males fan their tails, puff their chests, beat their wings, inflate yellow air sacs over their chests and spar with each other, creating unforgettable sounds of cooing, swishing and poinking—all to attract a drab female hidden in the brush.

Sage grouse, which have inhabited western North America since the Pleistocene epoch, were so abundant in the 1800s that travelers reported flocks of the birds darkening the sky. Since 1900, however, habitat loss has reduced sage grouse to about eight percent of their historic numbers.

Until Lewis and Clark encountered the bird in 1805, the sage grouse, like the black-tailed prairie dog and the gray wolf, had never been recorded in the annals of European American science. The explorers’ detailed observations of these animals are significant today not just to historians and scientists, but also to conservationists. Because all three species are considered biological indicators of the health of ecosystems they inhabit—sagebrush steppe, prairie grasslands and forests—Lewis and Clark’s vivid, engaging descriptions can be used as a yardstick for current wildlife conservation efforts and to inspire future generations of naturalists.

Portland, Oregon, writer Elizabeth Grossman is the author of Watershed: The Undamming of America and Adventuring Along the Lewis & Clark Trail.

From the beginning, NWF has worked to protect many wildlife species described by Lewis and Clark on their historic journey 200 years ago as well as safeguard the animals’ habitat. Targeted species include rare and endangered animals such as the gray wolf, grizzly bear, bison, prairie dog, pronghorn, northwestern salmon and sage grouse. For information on NWF’s efforts to conserve these and other depleted species that were abundant two centuries ago, see this section.