Deadly Days for the Desman

A body like a muskrat, nose like a hedgehog and feet like a duck-billed platypus, give this Russian mammal a comical appearance—but its plight is no laughing matter 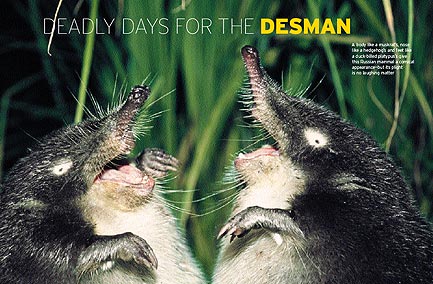 AT KLYAZMA WILDLIFE SANCTUARY, 120 miles east of Moscow, two rangers carefully draw an illegal fishing net from a floodplain lake into their small boat. Fish squirm in the contraption. Nearly half the net is in the boat when they notice a small, bedraggled animal with a long nose and scaly tail entangled in the strands. As they pull it near, the men recognize the creature as a desman, an aquatic insectivore distantly related to the mole, whose ancestors have inhabited lakes like these for 30 million years. The animal is lifeless. Zoologist Gennady Khakhin, who conceived this refuge to conserve the endangered desman three decades ago, watches solemnly from the shore.

Found only in floodplain lakes of central Russia, the desman was common from Kiev to the Ural Mountains up until the eighteenth century. 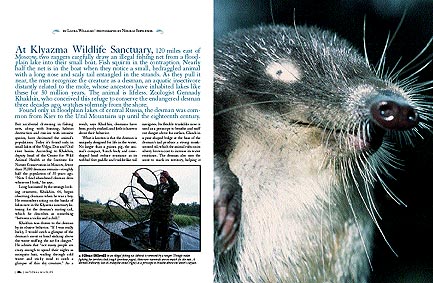 A DESMAN DROWNED in an illegal fishing net (left) is removed by a ranger. A desman ordinarily uses its trunkline snout (right) as a periscope to breathe above the water’s surface.


But accidental drowning in fishing nets, along with hunting, habitat destruction and run-ins with invasive species, have decimated the animal’s populations. Today it’s found only in small lakes of the Volga, Don and Ural river basins. According to Khakhin, deputy head of the Center for Wild Animal Health at the Institute for Nature Conservation in Moscow, fewer than 35,000 desmans remain—roughly half the population of 30 years ago. "Now I find abandoned desman dens wherever I look," he says.

Long fascinated by the strange-looking creatures, Khakhin, 66, began observing desmans when he was a boy. He remembers sitting on the banks of lakes now in the Klyazma sanctuary listening for the desman’s mating call, which he describes as something "between a violin and a drill."

Khakhin was drawn to the desman by its elusive behavior. "If I was really lucky, I would catch a glimpse of the desman’s snout or head sticking above the water sniffing the air for danger." He admits that "not many people are crazy enough to spend their nights as mosquito bait, wading through cold water and sticky mud to catch a glimpse of this shy creature." As a result, says Khakhin, desmans have been poorly studied, and little is known about their behavior.

The Russian desman’s only living relative is the Pyrenean desman, a separate species found in the Pyrenees and central Portugal.

What is known is that the desman is uniquely designed for life in the water. No larger than a guinea pig, the animal’s compact, 8-inch body and cone-shaped head reduce resistance as its webbed feet paddle and rudderlike tail navigates. Its flexible trunklike nose is used as a periscope to breathe and sniff out danger above the surface. Glands in a pear-shaped bulge at the base of the desman’s tail produce a strong musk-scented oil, which the animal rubs on its silvery brown coat to increase its water resistance. The desman also uses the scent to mark its territory, helping it retrace its course in murky water and compensating for its rudimentary vision.

Above the surface, the desman builds an intricate network of dens in which to breathe more easily as well as sleep, eat and raise young while hiding from predators. Entered through underwater entrances, the dens are usually located at about 100-foot intervals around a lake, approximately the distance a desman can travel underwater in a minute. Paddling along a lake bottom in search of food, the desman clears trenches between its dens, which retain the animal’s musk scent. The desman’s primary prey—bottom-dwelling insects and their larvae, snails and small fish—are lured to these trenches by the aerated water and scent.

When Khakhin started observing desmans five decades ago, they already were in trouble. Beginning in the late nineteenth century, the animals were actively hunted for their soft, durable pelts. Homemakers used the desmans’ dried, musk-scented tails as sachets for their linens to deter moths. Later, the oil was used in perfumes and colognes. By the 1920s, desman populations had declined so much that the Soviet government prohibited hunting the species. It lifted and imposed restrictions several times over the next 30 years, finally declaring a complete moratorium on desman hunting in 1957.

Even so, subsequent destruction of the desman’s habitat reduced its numbers further. Wetland drainage for agricultural crops during the 1960s and 1970s eliminated many floodplain lakes. Reservoirs flooded habitat and drowned many of the animals. Logging in floodplain forests removed trees where desmans took refuge during spring floods. 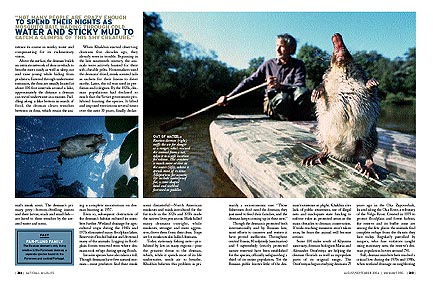 OUT OF WATER, a Russian desman (right) sniffs the air for danger as a ranger, who’s rescued the animal from a net, takes it to a safe location for release. The creature is much more at ease in the water (left), where it spends most of its time. Adaptations for aquatic life include waterproof fur, a cone-shaped head and webbed feet used as paddles.


Invasive species have also taken a toll. Though desmans have few natural enemies—most predators find their musk scent distasteful—North American muskrats and mink introduced for the fur trade in the 1920s and 1930s made the natives’ lives precarious. Mink killed many desmans outright, while muskrats, stronger and more aggressive, drove them from their dens. Traps set for muskrats also killed desmans.

Today stationary fishing nets—prohibited by law in many regions—pose the greatest threat to the desman, which, while it spends most of its life underwater, needs air to breathe. Khakhin believes this problem is primarily a socioeconomic one: "Those fishermen don’t need the desman; they just need to feed their families, and the desman keeps coming up in their nets."

Though the desman is protected both internationally and by Russian law, most efforts to conserve and restore it have proved ineffective. Throughout central Russia, 80 zakazniks (sanctuaries) and 4 zapovedniks (strictly protected nature reserves) have been established for the species, officially safeguarding a third of its entire population. Yet the Russian public knows little of the desman’s existence or plight. Khakhin cites lack of public awareness, use of illegal nets and inadequate state funding to enforce rules in protected areas as the main obstacles to desman conservation. If wide-reaching measures aren’t taken soon, he fears the animal will become extinct.

Some 100 miles south of Klyazma sanctuary, desman biologists Maria and Alexander Onufrenya are helping the desman flourish as well as repopulate parts of its original range. The Onufrenyas began studying desmans 25 years ago in the Oka Zapovednik, located along the Oka River, a tributary of the Volga River. Created in 1935 to protect floodplain and forest habitat, the reserve and its buffer zone are among the few places the animals find complete refuge from the threats they face today. Regularly patrolled by rangers, who fine violators caught using stationary nets, the reserve’s desman population hovers around 750.

Still, desman numbers here reached a critical low during the 1970s and 1980s, when wetland drainage on neighboring lands, along with increased water use for irrigation, reduced lake habitat. In 1994, the Onufrenyas received funding from the World Wide Fund for Nature to restore desman habitat in the reserve. Within two years, they had created 14 lakes deep enough to sustain the animals. Even before plants took root along the freshly formed banks, desmans had settled in half the lakes. Within three years, they inhabited all the new lakes.

Now the Onufrenyas are helping restore the species elsewhere in its former range by capturing desmans from thriving colonies in the Oka floodplain and introducing them to other protected areas. In 1996, Alexander Onufrenya toured parts of western Russia to identify promising spots to release the animals. He focused on strictly protected zapovedniks and national parks with appropriate conservation regimes. "We can take as many as 100 desmans from the Oka floodplain to other areas without damaging the local population," he says. 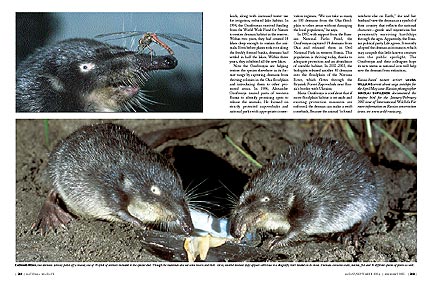 CHOWING DOWN, two desmans (bottom) polish off a mussel, one of 70 kinds of animals included in the species’ diet. Though the mammals also eat some insects and their larva, another desman (top) appears oblivious to a dragonfly that’s landed on its snout. Desmans consume snails, leeches, fish and 30 different species of plants as well.


In 1997, with support from the Russian National Parks Fund, the Onufrenyas captured 18 desmans from Oka and released them in Orel National Park in western Russia. This population is thriving today, thanks to adequate protection and an abundance of suitable habitat. In 2002–2003, the biologists released another 40 desmans into the floodplain of the Nerussa River, which flows through the Bryansk Forest Zapovednik near Russia’s border with Ukraine.

Maria Onufrenya is confident that if more floodplain habitat is set aside and existing protection measures are enforced, the desman can make a swift comeback. Because the animal "is found nowhere else on Earth," she and her husband view the desman as a symbol of their country that reflects the national character—gentle and mysterious but persistently surviving hardships through the ages. Apparently, the Russian political party Life agrees. It recently adopted the desman as its mascot, which may catapult this little-known creature into the public spotlight. The Onufrenyas and their colleagues hope its new status as national icon will help save the desman from extinction.