Drama on the High Seas 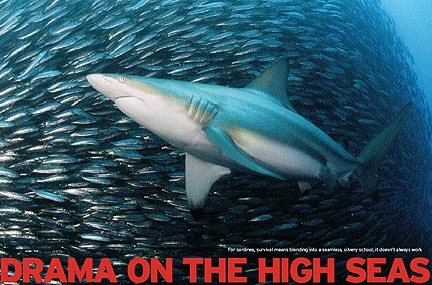 TRANSMITTED THROUGH the dense medium of seawater off South Africa's east coast, the syncopated percussion deafens and terrifies.

It's the loudest, most penetrating twang I have ever heard, like the pluck of a very taut metal bass guitar string as long and as thick as a telephone pole.

For the rapidly diminishing number of small silvery sardines in front of me, it is the twang of death.

The sound is that of dozens of cape gannet seabirds hitting the water at 60 miles per hour after spotting and circling their prey from the sky.

Sweeping back their elegant black-tipped white wings into "W"s—looking like supersonic fighter planes—only in the last fraction of a second did they fold them flat against their nearly 3-foot bodies and transform themselves into guided missiles.

Upon entry, gannets do not strike their targets directly but pursue them at high speed, using the momentum gained from their free fall, changing course as necessary and sometimes seizing prey with sudden sideways snaps. 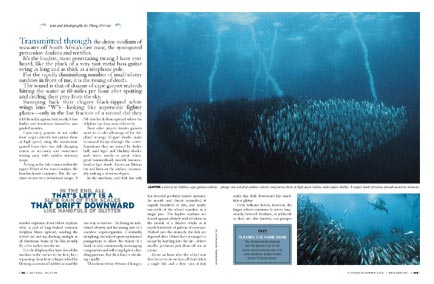 LEAVING, a trail of air bubbles, cape gannet seabirds plunge into a ball of sardines (above) and pursue them at high speed (below, with copper sharks). A copper shark (previous spread) awaits its moment.


As long as the fish remain within the upper 30 feet of the water's surface, the bombardment continues. But the sardines do not try a downward escape. A sudden explosion from below explains why. A pod of long-beaked common dolphins blasts upward, sending the school out and up, flashing sunlight in all directions. Some of the fish actually fly a few inches into the air.

It is the dolphins that have forced the sardines to the surface in the first place, separating them from a larger school by blowing a curtain of bubbles around the fish that herds them upward where the dolphins can feast more effectively.

Now other players besides gannets move in to take advantage of the dolphins' strategy. Copper sharks make occasional forays through the center. Sometimes they are joined by dusky, bull, sand tiger and blacktip sharks, and—more rarely—a great white, great hammerhead, smooth hammerhead or tiger shark. Above, an African fur seal lazes on the surface, occasionally making a downward pass.

In the mayhem, each fish has only one way to survive—by losing its individual identity and becoming part of a seamless superorganism. Constantly morphing, the school opens up internal passageways to allow the transit of a shark or seal, continuously rearranging components and reflecting light in dazzling patterns. But the school is shrinking rapidly.

FACT
Playing the Name Game
The Bryde's whale (rhymes with Buddha's)—one of the many marine species that prey upon sardines—is also known as the "tropical whale."


Then from below, 40 tons of hungry, hot-blooded predator barrels upward. Its mouth and throat expanded, it engulfs hundreds of fish, and nearly one-sixth of the school vanishes in a single pass. The hapless sardines are forced against a bristly wall of baleen in the mouth of a Bryde's whale as it expels hundreds of gallons of seawater. Pushed into the stomach, the fish are digested alive. Others have managed to escape by hurtling into the air—where smaller predators pick them off one at a time.

About an hour after the school was first forced to the surface, all that's left is a single fish and a slow rain of fish scales that drift downward like handfuls of glitter.

Forty fathoms below, however, the larger school continues to move tenaciously forward. Sardines, or pilchards as they are also known, can prosper only in water temperatures between 57 and 68 degrees F. This means that during the southern summer, they stay in the cooler waters around the southern tip of the African continent but can thrive as far north as Namibia thanks to the cold Benguela current, which flows up the west coast of South Africa.

On the east coast, the opposite situation prevails. The Mozambique, or Agulhas, current sweeps warm, clear, blue water from the tropical regions of the Indian Ocean southward along the African coast at an average speed of more than 3 feet a second. This mighty river within the sea meanders along the continental slope, bringing warm water well south of the Tropics and making the area inhospitable for sardines.

When winter approaches, however, the underlying waters begin to cool, and the sardines expand their range northward along the east coast of South Africa from the Cape region into the Transkei and Kwazulu-Natal provinces from May through July. An intermittent counter-current also often pushes a tongue of cold, green water north. This allows the filter-feeding fish to travel in shallow water, where the plankton they eat is concentrated. 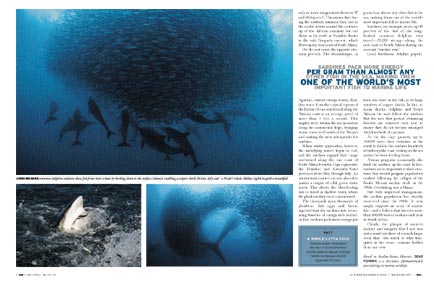 LONG-BEAKED, common dolphins separate these fish from their school by herding them to the surface (top), enabling a copper shark (below, left) and a Bryde's whale (below, right) to grab a mouthful.

The thousands upon thousands of plankton, fish eggs and larvae ingested turn the sardines into swimming bundles of energy-rich biofuel. In fact, sardines pack more energy per gram than almost any other fish in the sea, making them one of the world's most important fish to marine life.

Sardines, for example, make up 85 percent of the diet of the long-beaked common dolphins that travel—20,000 strong—along the east coast of South Africa during the seasonal "sardine run."

Local bottlenose dolphin populations also feast on the fish, as do large numbers of copper sharks. In fact, so many sharks, dolphins and South African fur seals follow the sardines that the nets that protect swimming beaches are removed each year to ensure they do not become swamped with hundreds of carcasses.

As for the cape gannets, up to 160,000 leave their rookeries in the south to follow the sardines hundreds of miles up the coast, resting on the sea surface between feeding bouts.

FACT
A Whole Lotta Eggs
Sardines spawn throughout the year in South Africa but activity peaks in August. A single female can release 30,000 eggs every 15 days.


African penguins occasionally also track the sardines up the coast. In fact, sardines are so important to these creatures that several penguin populations crashed following the collapse of the South African sardine stock in the 1960s. Overfishing was to blame.

But with improved management, the sardine population has steadily recovered since the 1980s. It now amply supports an array of marine life—and a fishery that harvests more than 100,000 tons of sardines each year in South Africa.

Clearly, the glimpse of nature's majesty and savagery that I saw was just a small sideshow of a much larger event that—like much of what transpires in the ocean—remains hidden from our view.

Based in Kailua-Kona, Hawaii, Doug Perrine is a freelance photojournalist specializing in marine wildlife.