In Heaven With Hippos 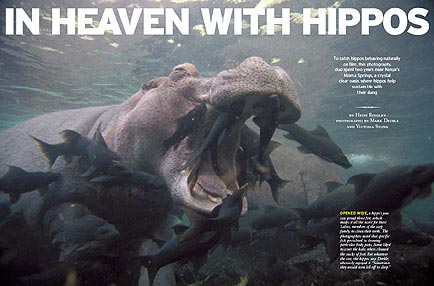 FIGURING OUT HOW to capture the natural behavior of hippos underwater while not being noticed by the three-ton beasts—or the crocodiles that share their living quarters—isn't easy. To do so, film makers Victoria Stone and husband Mark Deeble set up camp with their two young children for a two-year stint in the African bush near Kenya's Mzima Springs—a protected oasis of water that gushes out from below a lava ridge into a mile-long series of clear pools in Tsavo National Park.

FACT
Dung Wars
Hippos mark territories by defecating and switching their tails back and forth to send the dung flying. Males even engage in ritual "feces battles." The one that produces the greatest amount wins.

Their initial idea was to don scuba gear and film the creatures underwater. That proved too dangerous. Within the first few weeks Deeble was accosted by a croc. Using his camera to stun the reptile with a whack on the head, Deeble escaped with a new plan: to use remote-controlled cameras underwater and to build a series of 40- to 50-foot towers along the banks. In doing so, the couple achieved spectacular results: "We watched where the hippos congregated and positioned our towers in places where we predicted certain things would happen," says Deeble. The hippos slowly grew accustomed to the new accoutrements in their environment. After a few months, the photographers caught them behaving naturally close to the cameras. "When you put this amount of time in, things reveal themselves that you never could imagine," Stone says. 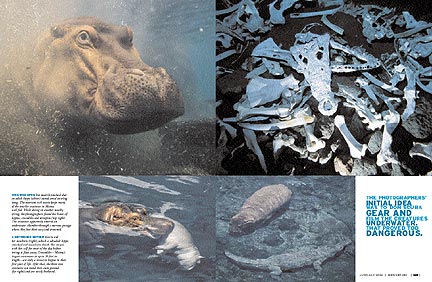 Watching a new mother periodically help her weeks-old calf to the surface to breathe, for example, the couple waited for the day she would introduce her offspring to the rest of the herd. "We knew that was about to happen," Deeble says. "But we were shocked at what we witnessed instead."

In a rarely documented behavior, a subadult hippo challenged the mother, chasing her off and mauling the calf to death. Deeble and Stone watched as the extremely agitated mother tried to retrieve her offspring but couldn't. The juvenile—perhaps a male trying to rid itself of a future rival—would not release it.

"I'm not one to attach emotions to animals," says Deeble. "But when the mother was finally able to get back to her baby, she reacted as if it was asleep underwater and tried helping it to the surface to breathe. But it was long dead. She hung around for the whole day, retrieving the body when it occasionally floated away, but gradually realized the calf couldn't be saved. The last time it floated off, she left it to the crocs." 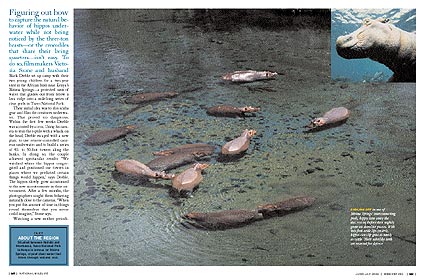 Given Mzima's abundance of predatory creatures—turtles, crocodiles, birds, scorpions, fish and insects—death comes in many forms. But life in the spring, says Deeble, depends primarily on Mzima's stable population of 60 to 70 hippos. Vegetarians of epic proportions, the animals each consume more than a hundred pounds of grass in a single night, and their resulting dung—which looks a bit like chopped hay—carpets the bottom of the spring. In its midst, insects find hiding places. Snails and small fish—which, in turn, nourish those higher on life's pyramid—eat it. Even after death, a hippo's body sinks to the bottom and becomes food for terrapins and other scavengers.

Without hippos, say Deeble and Stone, Mzima might look like another unnamed spring that they chanced upon some 50 miles west in an unprotected area. "Once, that system had held all the players," says Stone, who points to crop competition with farmers and hunting as likely culprits in the downfall of hippos there. "Now there's nothing." Without hippo dung, she says, the spring became sterile and today its waters are nearly empty.

Yet back at Mzima, life rolls on. Oblivious to the fate of their former neighbors and tucked safely within the park, hippos contentedly chomp grass and drop dung like there's no tomorrow.

Heidi Ridgley is an associate editor for the National wildlife magazine.

With poaching on the rise and a collapse of law and order to blame, the common hippo—once considered safe from extinction—may soon join the elephant and rhino on Africa’s docket of endangered large mammals.

Prized for its ivory teeth, which can grow up to 2 feet long, hippos have become increasingly targeted by poachers following the ban on elephant ivory. The hippo is also fast becoming a trendy entrée in upscale African restaurants. Hippo meat sells for about $1 a pound, which makes each hippo worth about $3,000.

The Democratic Republic of Congo’s Virunga National Park was long thought to have one of the world’s largest hippo populations. Thirty years ago, it hosted a record 29,000 individuals. But a decade of war in nearby Rwanda kept park rangers from taking an up-to-date count until last summer. Today rangers estimate that only about 1,300 individuals remain.