In the Wake of the Corpse Whale 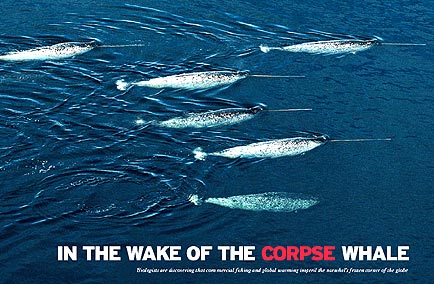 IT IS 2 A.M. on a mid-August night, but the sun still hangs on the horizon, and the temperature hovers in the 30s. Two biologists are standing watch on the rocky shoreline of Creswell Bay on Somerset Island in the eastern Canadian High Arctic.

Suddenly the dorsal ridge of a narwhal, a small Arctic whale, surfaces in the bay and advances toward a net the scientists have stretched 150 feet out from shore.

When the narwhal barrels into the net, the biologists sound the alarm. Instantly, everyone in the nearby research camp clambers out of tents, dons orange survival suits and rushes to launch Zodiacs for a race to the entrapped whale.

Soon, two boats circle the spot where the narwhal struggles underwater. The crews grab the net with thickly gloved hands and begin pulling the flailing 2,600-pound male to the surface, avoiding the long, slender tusk protruding from his snout. "We have to react quickly so the animal doesn't drown," says Mads Peter Heide-Jørgensen, a senior scientist at the Greenland Institute of Natural Resources.

The animal pulls the inflatables back and forth, splashing the biologists, but they still manage to put a rope around his tail and slide straps under his body, gradually bringing the narwhal to the surface. With his tail out of the water and air in his lungs, the animal stops struggling.

The biologists go to work, taking skin samples for DNA studies and attaching to the whale's tusk a satellite transmitter that will record the animal's movements and the depths of his dives. In less than an hour, they are done, and the narwhal quietly moves off.

Until recently, scientists knew little about narwhal natural history. But biologists from Greenland, Denmark and the United States are generating a wealth of information about this lifelong denizen of regions above the Arctic Circle, where the narwhal feeds on a variety of deep-sea fish. This knowledge is arriving at a crucial time, as the narwhal is increasingly threatened by developing commercial fisheries and global warming.

An adult narwhal ranges from 13 to 16 feet long, making it one of the smaller whale species. Males average about 2,700 pounds, females about 1,800. The narwhal is the only whale with a tusk, one of two teeth growing from the upper jaw through the lip in an artful spiral, like braided strands of ivory ending in a sharp point. Found primarily in males, tusks grow up to 6 feet long. Viking traders in the 10th century sold narwhal tusks to foreigners, claiming the tusks came from unicorns. Medieval Europeans believed these tusks possessed magical properties. The tusk's value to the narwhal is still a matter for conjecture. Males occasionally joust with them, but most biologists believe the tusks are simply advertisements to attract mates.

Though poaching for tusks continues, Heide-Jørgensen thinks that the narwhal is more threatened by native Inuit who increasingly use modern boats, radios and navigational equipment to hunt the whales for meat, which they sell for up to $14 a pound. Inuits consider narwhal skin a delicacy. It is traded throughout Greenland. "It has a high level of vitamin C," says Heide-Jørgensen. "It's one of the reasons Inuit society has survived without carrots, salads and cucumbers." 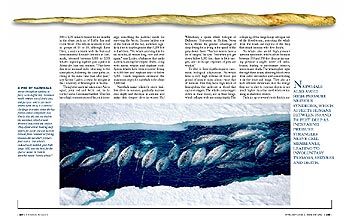 Narwhals--the name is Danish for "corpse whale," apparently a reference to the species' mottled, gray color--live about 35 years, summering in High Arctic bays and fiords in Canada and Greenland. In winter, almost the entire population of about 50,000 animals moves south some 900 to 1,250 miles to winter for six months in the dense pack ice of Baffin Bay and Davis Strait. The whales normally travel in groups of 15 to 30, although Rune Dietz, a senior scientist with the National Environmental Research Institute in Denmark, observed between 1,000 to 2,000 whales migrating together past a point in Admiralty Inlet one summer. "They have this strict seasonal cycle, returning to the same places, following the same paths, arriving at the same time year after year," says Kristin Laidre, a research biologist at the University of Washington in Seattle.

Though the narwhal takes some Arctic squid, polar cod and Arctic cod, its favorite food is Greenland halibut. This fish has a high concentration of fat, rich in energy, something the narwhal needs for surviving the Arctic. Because halibut rest at the bottom of the bay, narwhals regularly dive to depths greater than 5,000 feet to find them. "Narwhals are doing this for six months, all winter long, over and over again," says Laidre, a behavior that ranks narwhals among the deepest divers, along with sperm whales and elephant seals. Sperm whales have been recorded diving to 6,300 feet and elephant seals to below 5,000. Heide-Jørgensen estimates the maximum depth for narwhals to be about 5,500 feet.

Narwhals make relatively short, shallow dives in summer, gradually increase dive depth and duration in autumn and make their deepest dives in winter. Hal Whitehead, a sperm whale biologist at Dalhousie University, in Halifax, Nova Scotia, thinks the greatest advantage of deep diving for a living is the speed of the prey down there. "Surface waters have a lot of oxygen," he says. "But when you get down below 1,300 feet, there is little oxygen, and the escape responses of prey are weaker."

To dive to these depths requires enormous biological adaptations. Narwhals have a very high volume of blood per pound of muscle mass, almost twice that of humans. Plus they have high levels of hemoglobin, the molecule in blood that captures oxygen. The whales carry oxygen down in their blood, not in their lungs, which collapse with increasing depth. The collapsing of the lungs keeps nitrogen out of the bloodstream, protecting the whale from the bends and rapture of the deep that attack humans who dive deeply.

Narwhals also avoid high-pressure nervous syndrome, which affects humans between 350 and 700 feet deep as increasing pressure strangles nerve cell membranes, leading to involuntary tremors, seizures and death. The whales glide right through these zones, shunting blood away from outer extremities and concentrating it on the heart and lungs. They also are such efficient swimmers that the energy they use to dive to extreme depths is not much higher than that used when swimming in shallower waters.

Pack ice up to several yards thick is another challenge the narwhal faces in winter, when Baffin Bay almost completely freezes over. According to Heide-Jørgensen, satellite images of the terrain show nothing but white. "Only when you go over it in a helicopter do you see the cracks and long narrow openings that are vital to the narwhal," he says. Those cracks may decrease as winter progresses, constituting less than half a percent of the northern part of the bay by the end of March.

But even this space is not guaranteed. Open water can suddenly freeze during periods below minus 22 degrees F and without winds. That combination can be lethal to narwhals, which can get caught in shrinking holes and literally freeze solid. Nearly 150 narwhals died when they were trapped in a small hole in the mouth of Disko Bay, West Greenland, in 1994.

Ironically, scientists worry that increased entrapments might be one of the results of global warming. In general, the Northern Hemisphere is heating up, and sea ice is decreasing alarmingly in the Arctic. But increased rains from global warming are reducing ocean salinity, a change that could shut down North Atlantic currents that bring warm water from the Equator. The result could be colder temperatures and increased ice in Baffin Bay.

Development of potential halibut fisheries in Baffin Bay also could affect narwhals. Commercial fishers in Canada, Greenland and Norway are all interested in what Heide-Jørgensen refers to as "one of the few pristine fish stocks left in the world." The fishery is a fairly recent find, and problems have yet to materialize, but experience elsewhere is not encouraging. Local sport and subsistence fishers in Sitka, Alaska, for example, saw a steep decline in their fishery when commercial and charter vessels arrived in the 1990s. State statistics showed that local residents who had caught 3,019 halibut in Sitka Sound in 1993 caught only 447 there in 1996. A management plan now divvies up the resources among competing interests. But Heide-Jørgensen wonders how fisheries managers off Greenland will allocate the resources between fishermen and narwhals.

Increased ice and fishing would affect the narwhal in its winter range, where scientists believe the whales take most of their food. Yet scientists have been unable to secure funds to study narwhals there. The biologists' greatest concern is that survival challenges are mounting while data to monitor harm does not exist. For the narwhal, ignorance is not bliss, but peril. Says Heide-Jørgensen, "These risks from climate change and increased fishing pressure are taking place in one of the remotest parts of the world, in the middle of winter, where it's completely dark, in offshore areas where the bulk of the narwhal population exists, and yet we know very little. A proper understanding of the difficulties these special animals are facing is urgent to ensure their long-term survival."

Michael Tennesen wrote a feature article on the giant Pacific octopus for the December/ January 2003 issue.

Narwhal: A Cetacean Sensation
What's special: Although the narwhal is a small whale, averaging only 2,700 pounds for males, it is the only whale that sports a tusk.

The tusk: Narwhals have only two teeth, both in the upper jaw. When males are about a year old, the left tooth erupts as it begins maturing into a tusk that can grow up to 6 feet long and weigh up to 22 pounds. About 3 percent of females grow tusks, but female tusks reach a maximum length of only 4 feet. Some males grow two, although the right is always smaller than the left.

Range: In seas from the Canadian Arctic east to central Russia, although sometimes found in eastern Siberia, Alaska and western Canadian Arctic. Strays may occur as far south as Newfoundland.

Numbers and Status: Although the species numbers not more than 50,000, it is hunted both for food and tusks. Inuit people eat narwhal skin raw and fat. Tusks are sold to tourists and other markets. About 300 to 550 narwhals are taken yearly in Canada and 560 in Greenland.