Magic Moments with the Maned Wolf

In the grasslands of central Brazil, the author gets a rare glimpse into the secretive life of South America's largest wild canine 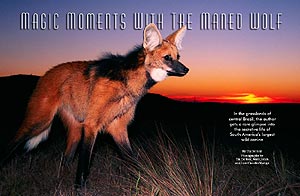 THE MOON had long since set and myriad stars shimmered icy blue in the sky over Emas National Park, a 500-square-mile reserve in the central highlands of Brazil. Numb from cold and groggy with fatigue, I swept my spotlight fruitlessly back and forth across the grassy landscape. Scanning the darkness, I leaned as far out of the car window as I could while my partner Mark Jones drove slowly along the dusty track. From long before sunrise until after midnight, this had been our search pattern for almost two weeks during the July dry season, using binoculars by day and spotlight by night. The object of our quest was the maned wolf, an oversized yet incredibly graceful doglike creature with rufous red coat and legs so spindly it is sometimes described as a giant fox on stilts. Standing three feet at the shoulder, it is taller than some Great Danes. Yet it is so slender that, at 50 pounds, it weighs no more than a small basset hound. South America’s largest wild canine, in fact, is neither a fox nor a wolf. Scientists currently classify it as a single species within a single genus (Chrysocyon brachyurus). "Untangling the evolutionary and taxonomic relationships of this species to the rest of South America’s canids has not proved to be an easy task," says University of Maryland researcher James Dietz.

Scientists do agree that this mysterious hunter leads a solitary, mainly nocturnal life in open savanna scrublands throughout central Brazil, spilling over into small parts of Bolivia, Peru, Paraguay and northern Argentina. Adaptable and resourceful, individual maned wolves range through enormous territories where they live off everything from rodents and birds to venomous snakes and berries. 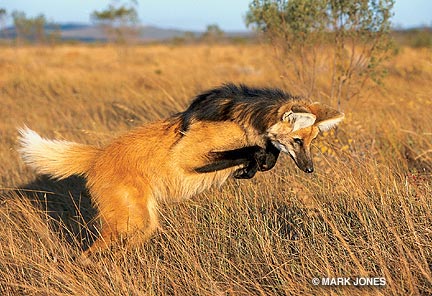 A NOCTURAL PREDATOR that is skilled at locating prey (pouncing, above) in the open savanna of central Brazil, the maned wolf is, in fact, neither a wolf nor a fox. Scientists classify it as a single species within its own genus.


Shy, secretive and little studied, the enigmatic animal captured our imagination long ago. But even though we saw tracks everywhere, we had experienced nothing on our trip but a few fleeting glimpses of the creature. The comments I repeatedly encountered in maned wolf literature—"rarely seen," "hard to observe," "poorly known"—began to make more and more sense. Too weary to feel disappointed, I yearned only for a few hours sleep before resuming the search for the animal.

Just as these clouded thoughts drifted through my mind, a pair of bright orange-red eyes suddenly caught my light, shining back from the gloom like surreal laser beams. Jolted, I rapped lightly on the car as Mark glided it to a halt, switching off the engine. The laser eyes seemed to bore through the darkness even as the animal’s form remained shrouded in shadows. Slowly it stalked around us in a deliberate arc, eyes glinting between tall grass stalks, measured footfalls crunching cautiously on dry blades. All at once the creature emerged from the curtain of high grass only yards ahead. It was a male. With his back arched and hairs bristling, he stared at us briefly with lowered head, then sauntered away, sniffing the ground and scent-marking the roadside bushes. His gait was particularly peculiar: Rolling his shoulders and swaying slightly, he lifted both feet on each side of his body simultaneously the way camels do, rather than alternately like other canids.

We were breathless with excitement. This was truly, we soon discovered, the night of the wolves. Only hours earlier, a grass fire raged briefly through the area—a natural occurrence in this open habitat—and it seemed to cause other nearby wolves to break all the rules of their solitary habits. They converged on the rich pickings left behind on the charred ground. 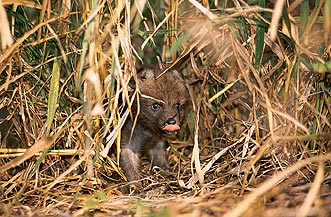 RESEARCHERS do not know how many maned wolves exist today, but they estimate that about half of the pups (above) born each year are killed by cars and trucks.


For the rest of the night we followed the creatures, watching them hunt, play and socialize. We saw six different individuals, distinguishable by the shades of their fur and the length of their manes. One juvenile tried to eat a toad roused from hibernation by the fire, only to gag on its venomous secretions. Another succeeded in running down a low-flying tinamou (a ground bird) flushed from under a bush. An older female snatched a roasted snake and several large nightshade fruits from the ashes. Away from the burn, a large male nearly cleared the eight-foot-tall grass in a magnificent leap trying to swipe another startled tinamou out of the air with its paw. A volley of roar-barks—a kind of feline roar and dog’s bark combined—rung out in the darkness, answered by another in the opposite direction. Three yearlings, presumably litter mates, spent an hour cavorting, alternating between submission and dominance while establishing the hierarchy that would someday define how they will defend their lone territories. By the time dawn broke, we realized that in seven hours we may well have witnessed more of the wolves’ private lives than we might reasonably expect in a six-month field study.

With daylight the wolves vanished, but I was left with a new insight into their extraordinary adaptations to life in the savanna scrubland habitat known in Brazil as the cerrado, which is characterized by vast fields of grasses (some of which can be ten feet high) and fire-resistant stunted scrub forest. This ecosystem originally covered nearly 690,000 square miles, making it Brazil’s second largest ecoregion after the Amazon, or about 21 percent of the country’s total land area. For nearly half the year, from April to October, this enormous region is sunny and swept by drying winds. The remaining months are marked by violent thunderstorms famous for sparking huge wildfires that are an integral part of the renewal of this dynamic landscape.

The maned wolf’s tall and incredibly slender stature, along with its pacing gait, enable it to wander effortlessly through this sea of grass, towering high enough to maintain a good view and sleek enough to offer no resistance amongst the stiff stalks. Superb vision, an exquisite sense of smell and oversized, fine-tuned ears help the animal find even the smallest and most secretive prey.

This adaptability, together with the animal’s retiring nature, enabled the maned wolf to expand its range and colonize new regions in past decades, even in the wake of deforestation for cattle ranching. But more recently, the species has increasingly lost ground as its habitat is converted into intensive soybean and other grain monocultures. Today, less than 20 percent of the original cerrado habitat is still intact, although laws passed in Brazil in the 1990s are now obliging landowners to protect at least 20 percent of their land as natural habitat—a measure government authorities enforce with the aid of satellite photographs of the region.

Meanwhile, hard facts about the species’ status remain elusive; no one even knows how many maned wolves exist in the wild. As a result, experts disagree over whether the animal should be considered "endangered" (its legal status in much of its range) or simply "vulnerable" (as listed by international treaties, such as IUCN Red Book and CITES Appendix II).

Studies by a researcher at Brazil’s Goias State University indicate that maned wolves may adjust to habitat fragmentation far better than other large carnivores. Yet recent findings show that a wolf pair’s home range can measure nearly 50 square miles, more than ten times the previously recorded figure. This could mean that isolated reserves may be too small to maintain the species’ genetic variability for long-term survival. At one study site, seven radio-collared wolves, whose territories overlapped in a small 40-square-mile reserve in the same region, all strayed beyond its boundaries into areas where vehicle traffic became another major cause of death. Roughly half the number of pups born each year—an average of two per litter—are killed by cars and trucks. The maned wolf’s circumspect lifestyle remains the primary obstacle in understanding all of the factors it needs to survive.

Our own peek into this wolf’s secrets did not end on the night of the fire. During the last week of our stay in Brazil, we encountered a gorgeous female whose inquisitive nature allowed us slowly to gain her trust over several days. Paler on her neck and chest than other wolves, we named her Clara ("clear" in Portuguese). Unlike most of the other wolves we saw, she regularly spent hours hunting and traveling in broad daylight. At first we kept our distance, a hundred yards or more, but her curiosity kept winning out over her timidity and she would double back or wait for us to see what we were doing. By the fourth day she had completely accepted our presence.

From then on, Clara went about her business with barely a glance at us as we stumbled along trying to follow her. We watched her hunt, drink, sleep and patrol her huge territory. She led us down exquisite flower-spangled streambeds and over high rocky ridges with magnificent vistas. Nothing escaped her attention. She could detect the sound of a mouse scrabbling in the grass 30 feet away, or pick up the scent of a tinamou as far as 100 feet. Immediately, her tail hanging limp at all other times, shot up in quizzical excitement. As she zeroed in on her target she would end with a spectacular, spring-loaded leap to pin down her victim under a matting of grass with splayed forelegs.

My most memorable moment following her occurred during a surreal sunset with the full moon rising in a pink and purple sky just as the last sun rays fired up Clara’s lush fur. I noticed a pair of small aplomado falcons following close behind her as she hunted, flying from bush to bush. Precisely as I had read in a research paper, the raptors were on the lookout for smaller birds that she might flush from the grass. On queue, a large tinamou she had been stalking escaped noisily and sailed far down the valley, with the two falcons in a hot stoop after it. But Clara did not give up. Standing still, she watched them become mere pinpricks in the distance. I could not see whether they made the kill, but Clara apparently did, shooting off after them like a flaming streak to reclaim the prey she apparently considered rightfully hers.

For me, those days spent in the private sanctum of such a cryptic animal’s intimate life was an experience akin to magic. Clara brought more than a passing reward for all those frustrating sleepless nights shining my spotlight into the inky darkness.