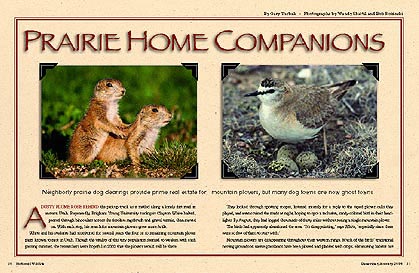 A DUSTY PLUME rose behind the pickup truck as it rattled along a lonely dirt road in eastern Utah. Repeatedly, Brigham Young University zoologist Clayton White halted, peered through binoculars across the desolate sagebrush and gravel terrain, then moved on. With each stop, his search for mountain plovers grew more futile.

White and his students had monitored for several years the four or so remaining mountain plover pairs known to nest in Utah. Though the vitality of this tiny population seemed to weaken with each passing summer, the researchers were hopeful in 2002 that the plovers would still be there.

They looked through spotting scopes, listened intently for a reply to the taped plover calls they played, and even cruised the roads at night, hoping to spot a reclusive, sandy-colored bird in their headlights. By August, they had logged thousands of dusty miles without seeing a single mountain plover.

The birds had apparently abandoned the area. "It's disappointing," says White, "especially since there were so few of them to start with."

Mountain plovers are disappearing throughout their western range. Much of the birds' traditional nesting grounds on native grasslands have been plowed and planted with crops, eliminating habitat not only for plovers but also many other species. Even in areas where habitat still remains, mountain plovers are losing out. Historically, the excavations and grazings of billions of prairie dogs created perfect mountain plover habitat, but prairie dog numbers are falling fast, leaving plovers and other animals in the lurch.

Mountain plover numbers have declined--possibly from the millions--to only about 10,000 birds today. "Mountain plovers are headed downhill," says wildlife biologist Craig Knowles, who heads a small Montana consulting firm called FaunaWest Wildlife Consultants. "If this trend isn't reversed, they could become extremely rare or even extinct."

The mountain plover, an exclusively North American bird, originated on the plains, nesting solely on arid, level terrain with short vegetation and plenty of bare ground--the kind of habitat typically found in prairie dog colonies. Although classified as a shorebird, this plover--one of 10 species of plover found in North America--consistently avoids moist areas and survives without ever drinking water. And despite the name, it lives nowhere near the mountains. Males and females look alike--similar to a pale version of a more common killdeer but without chest stripes. Both stand about seven inches tall and sport sandy brown colors that provide camouflage on the prairie. They feed on ants, grasshoppers, crickets and other insects, and in turn may become prey for coyotes, falcons and hawks.

BARKING DOGS: Prairie dogs not only provide habitat for mountain plovers, they also make great "watchdogs," barking warnings when predators approach. Black-tailed prairie dogs (above) are one of four prairie dog species known to cohabit with the birds.


Mountain plover nests are simple scrapes in the dirt, usually near a prominent rock, prairie dog mound or pile of cow manure. Biologists think these landmarks may help adults find their nests, or perhaps distract predators. When potential danger does approach, the adult plover may flutter away with a feigned wing injury. Or, if big feet are the threat, fly brazenly in the face of a cow or antelope.

Plover pairs often establish simultaneously two nests of three eggs, with each adult incubating one of the clutches. Upon hatching, the chicks leave the nests within hours and are soon finding their own insect fare. A month later, they fledge. And in late summer, mountain plover flocks make 800 to 1,000-mile, mountain-crossing migrations to their wintering areas, mostly in the Central and Imperial Valleys of California.

Historically, mountain plovers occupied 23 Great Plains and western states, two Canadian provinces and parts of Mexico. Nineteenth-century market shooters killed plovers by the thousands for food, and loss of habitat fueled the bird's decline long after the Migratory Bird Treaty Act of 1916 prohibited killing them. Mountain plover numbers fell 63 percent between 1966 and 1991. Of the 10,000 or so plovers that are left today, Colorado hosts several thousand--more than any other state. Montana and Wyoming tie for second-place with possibly 1,500 plovers each. Smaller populations are thought to exist in Nebraska, New Mexico, Kansas, Oklahoma, Texas and Mexico.

Around 1860, naturalist James Cooper first observed that mountain plovers in Montana seemed abundant on prairie dog colonies. But it wasn't until the 1970s that Knowles, a researcher who has studied the birds extensively, took a scientific look at the relationship between plovers and prairie dogs. The extent of the bird's allegiance to prairie dog colonies surprised him. "We couldn't even chase the plovers off the dog towns," he recalls. "They would run to the boundary of the colony, then fly a circuitous route back into the town." Of the 162 mountain plovers Knowles sighted during his two-year study, all but one were on prairie dog colonies.

Recent research confirms this relationship. Between 1995 and 2000, wildlife biologist Stephen J. Dinsmore, now a professor at Mississippi State University, located 641 mountain plover nests in Montana--only seven of which occurred outside of prairie dog colonies. "I've done a lot of looking for mountain plovers away from black-tailed prairie dog colonies," says Dinsmore, "and they just aren't there."

The mountain plover evolved eons ago during a herbivore heyday, when millions of bison and billions of prairie dogs kept vegetation cropped short, allowing the vulnerable birds to see approaching predators. Prairie dogs also serve as watchdogs, barking loud warnings whenever predators approach. In addition, says Dinsmore, "there is probably more food for plovers on prairie dog colonies. Prairie dogs produce lots of feces, which attracts the insects plovers like to eat." (In parts of California, endangered kangaroo rats also provide this service for wintering plovers.) Consequently, prairie dog towns long ago became prime nesting grounds for mountain plovers--but most of these colonies have disappeared.

An estimated five billion prairie dogs once populated 100 million acres from Canada to Mexico--with one Texas colony reportedly covering 25,000 square miles and containing 400 million of the rodents. But many farmers and ranchers consider prairie dogs pests. The animals have for decades been poisoned and shot largely without restriction and often with government funding. Many prairie dog colonies have been turned into farmland, and since the 1940s, sylvatic plague--caused by an exotic bacterium introduced from Asia--has killed the rodents in large numbers. According to the U.S. Geological Survey, prairie dogs currently exist on less than one percent of their former range, and their numbers have declined by 98 percent. 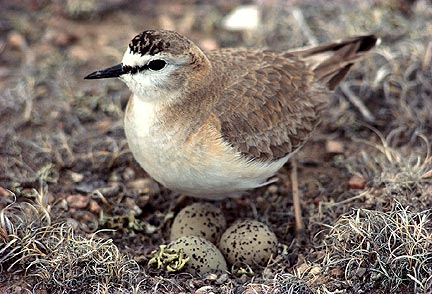 BREEDING BEHAVIOR: Mountain plover nests are simple scrapes in the dirt. Breeding pairs often establish more than one nest at a time, with each adult incubating one of the clutches.

Plover prosperity, however, is most closely tied to the more numerous black-tailed prairie dog. These rodents are important to plovers in Montana, Wyoming and--to a lesser extent--Colorado, because grasses there are naturally shorter.

And plovers aren't the only animals that depend on the burrowing rodents.

NWF has petitioned the U.S. Fish and Wildlife Service to list black-tailed prairie dogs as threatened under the Endangered Species Act. The agency agrees that listing is warranted but says other species have a higher priority, so no timetable for a listing has been established. The Utah prairie dog is already listed as threatened, and the Mexican prairie dog is listed as endangered.

Mountain plovers may suffer twice if black-tailed prairie dogs vanish. First, there is the outright loss of traditional breeding habitat. "When prairie dogs disappear, the colony can become unsuitable for mountain plovers in just a few weeks, as the vegetation quickly becomes a foot or two tall," says Dinsmore. 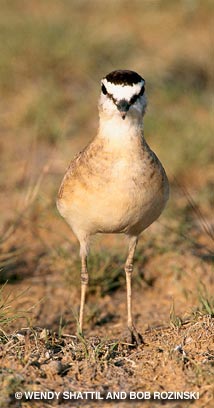 PLOVER LOOKOUT: As prairie dog towns grow scarce, mountain plovers are finding alternative nesting grounds in farm fields. Western farmers can help plovers by opting to plow fields in the fall instead of spring and planting crops after the birds' eggs hatch. This Colorado bird might benefit from a new program in its state that encourages farmers to call a toll-free number prior to plowing or planting, giving scientists a chance to mark plover nests before they get crushed.

Second, when prairie dog towns are turned into cropland, plovers sometimes continue to use the farm fields. However, some crops are seeded in May--after plovers have nested on the barren fields--and planting machinery destroys the eggs. Even if these birds nest again, they're likely to abandon their eggs when surrounding crops grow too tall for plover comfort. Biologists call this a "population sink"--plovers continue to nest but fail to produce many young.

Such losses could be reduced if farmers opt to plow in the fall, not spring, and postpone planting until plover eggs hatch. In Colorado, a new program encourages farmers to call a toll-free number before working their fields, so that field technicians with the Rocky Mountain Bird Observatory, a nonprofit conservation organization, have a chance to mark the locations of plover nests before they get crushed by tractors. The program is just getting off the ground, but it has already saved plover nests in dozens of fields.

Other partial solutions include planting short grasses on protected habitat and discouraging landowners from plowing virgin prairies. Some federal and state agencies have periodically burned grassland areas to reduce the vegetative cover plovers avoid. Under Secretary of the Interior Bruce Babbitt, the Fish and Wildlife Service submitted a proposal to list the mountain plover as threatened. But as this issue went to press, the agency decided against that move.

Still, the preservation and restoration of black-tailed prairie dog colonies remain key to mountain plover prosperity. Although livestock have replaced bison as grazers in many places, cattle and sheep alone are not enough. The continued existence of some plover populations will hinge on the long-term presence of prairie dogs. "We should discourage people from shooting and poisoning prairie dogs and from converting their habitat into subdivisions and farmland," says Miller. "We need to get landowners to sustain prairie dogs on their property."

Meanwhile, on the high desert of Utah, not much has changed. Last spring, researchers spotted one mountain plover, but that bird soon disappeared, and whether the plovers will ever return to nest is anyone's guess. All this leaves Brigham Young University's White ambivalent about the mountain plover's overall future. "On one hand," he says, "they are adaptable birds, and the adults tend to be long-lived. But for better or worse they have chosen to live on the grassland prairie, one truly endangered ecosystem."

The conservation of black-tailed prairie dogs and their habitat is crucial for the continued existence of mountain plovers and many other species. In July 1998, NWF petitioned the U.S. Fish and Wildlife Service to list the black-tailed prairie dog as threatened under the Endangered Species Act. In February 2000, the agency concluded that this species does warrant listing, but is precluded from being listed due to other higher-priority species concerns and resource constraints.

Since then, NWF has worked with federal, state and tribal wildlife management agencies, private landowners and other conservation groups and lawmakers to craft meaningful wildlife management plans and incentive programs for this keystone species. In doing so, NWF hopes to reverse the continuing decline of prairie dog-associated species and grassland ecosystems as a whole.