’Tis the Season for Birds and Berries 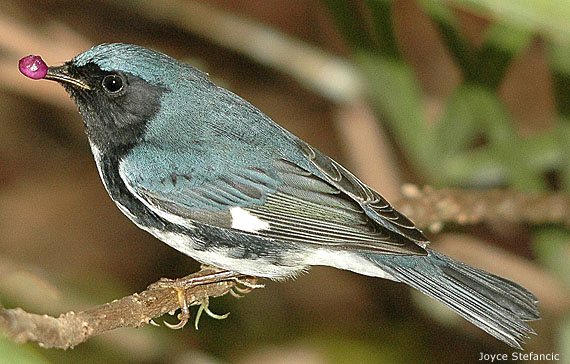 GETTING BIRDS through winter takes more than bird feeders and brush piles. It also takes a few spinach plants. But this spinach is not the green, leafy vegetable. To wildlife gardeners, a spinach plant is a tree or shrub that has bitter berries. Like those of us who prefer decadent foods over healthier alternatives, birds will flock first to ice cream plants, such as flowering dogwoods, and avoid spinach plants, such as hawthorns and sumacs, for as long as possible.

Only when the coldest days of the year set in and food sources are exhausted do birds begin to eat their spinach. At that point, the long-lasting berries can truly be a lifesaver.

"Fruits are very important for overwintering birds," says Christopher Whelan, an avian biologist with the Illinois Natural History Survey. According to Whelan, many insectivorous birds change their diet in fall and winter. Woodpeckers, thrashers, quail, robins, waxwings, mockingbirds, bluebirds, grouse, catbirds, thrushes and even chickadees and titmice turn to berries when the weather turns cold.

The best winter-fruiting plants for wildlife are native trees and shrubs. "Many of them produce prodigious fruit," says Whelan. Natives are also easy to care for once they are established. Dozens—even hundreds—of varieties are available.

Try cultivating some of the following plants in your garden. Nurseries and native plant societies can help you select the species best suited to your part of the country.

If you live in the southernmost sections of the country, now is an excellent time to set out fruiting plants. Gardeners in the northern tier and mountain states can plant in the spring. But in the rest of the country, you should wait until autumn before adding a little spinach to your backyard.

Sumac: For years sumacs were considered trash trees by gardeners. But now these widespread natives are cultivated for their fiery autumn foliage and showy seed heads. They are also without equal as a winter emergency food for a wide range of birds and mammals. Some 15 species occur in North America. Winged sumac is native to the eastern half of the United States. Smooth sumac extends into the West. In the Southwest, plant little-leaf, aromatic or evergreen sumacs. Poison sumac is not really sumac and should be avoided as it's more closely related to poison ivy.

Holly: "Probably the best winter berry plants are hollies," says Wynn Anderson, of the Chihuahuan Desert Gardens at the University of Texas–El Paso. Possum haw, a deciduous holly with abundant fruit, is found throughout the southeastern states. Another is winterberry, the hardiest of the hollies, flourishing in New England and eastern Canada. Its crimson berries improve with age and are popular with birds after a frost or two. Three other native hollies—American, yaupon and inkberry—are evergreen, providing protection from snow, rain and wind. Cluster female holly bushes with a male to ensure a good crop of fruit.

Saltbush: Several species of this desert shrub are native to the Southwest and California. Anderson recommends four-winged saltbush. "It's excellent for quail as well as for a number of other critters," he says. All of the saltbushes are drought tolerant and prefer well-drained soils and full sun.

Hackberry: Nearly 50 species of birds—ranging from roadrunners to titmice—eat the pea-sized fruit of the common hackberry. Related to the elm, this species is one of the few trees that thrives from the edge of the Rocky Mountains to the Atlantic seaboard. Eventually reaching 40 to 60 feet tall in ideal situations, the common hackberry is durable and can be planted in urban areas and in poor soils.

American Beautyberry: This hardy four- to six-foot shrub has purple or magenta fruit, which can last until mid-winter. Native in much of the eastern United States, beautyberry is a favorite of mockingbirds and several other species of birds (black-thoated blue warbler, above).

Hawthorn: Dozens of species of hawthorns are found in the United States and Canada. With thorns and a tendency to clump into thickets, these small trees do double duty, providing secure nesting sites in summer and plentiful berries in winter. Cedar waxwings, ruffed grouse and fox sparrows all devour the plants' scarlet berries. James Romer, a horticulturist for Iowa State University Extension, recommends Washington hawthorn in the East and Midwest. Another possibility is a cultivated variety of green hawthorn known as winter king.