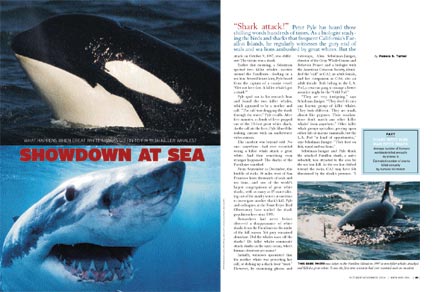 "SHARK ATTACK!" Peter Pyle has heard those chilling words hundreds of times. As a biologist studying the birds and sharks that frequent California's Farallon Islands, he regularly witnesses the gory end of seals and sea lions ambushed by great whites. But the attack on October 9, 1997, was different: The victim was a shark.

Earlier that morning, a fisherman spotted two killer whales—rarities around the Farallones—feeding on a sea lion. Several hours later, Pyle heard from the captain of a tourist vessel: "Get out here fast. A killer whale's got a shark!"

Pyle sped out in his research boat and found the two killer whales, which appeared to be a mother and calf. "The calf was dragging the shark through the water," Pyle recalls. After five minutes, a chunk of liver popped out of the 10-foot great white shark. As the calf ate the liver, Pyle filmed the sinking carcass with an underwater video camera.

The incident was beyond odd. No one—anywhere—had ever recorded seeing a killer whale attack a great white. And then something even stranger happened: The sharks of the Farallones vanished. 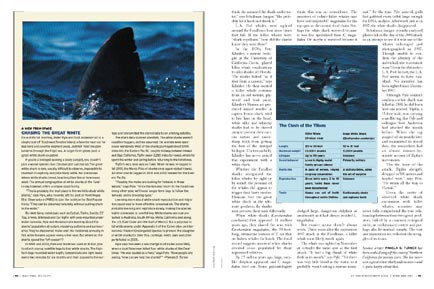 From September to December, this huddle of rocks 30 miles west of San Francisco hosts thousands of seals and sea lions—and one of the world's largest congregations of great white sharks, with as many as 15 materializing out of the murky waters at one time to investigate another shark's kill. Pyle and colleagues at the Point Reyes Bird Observatory have studied the shark population here since 1989.

Researchers had never before observed a disappearance of white sharks from the Farallones in the midst of the fall season. Yet prey remained abundant. Did the whales scare off the sharks? Do killer whales commonly attack sharks in the open ocean, where human observers are scarce?

Initially, witnesses speculated that the mother whale was protecting her calf, or dishing up a shark-liver "treat." However, by examining photos and videotape, Alisa Schulman-Janiger, director of the Gray Whale Census and Behavior Project and a biologist with the American Cetacean Society, identified the "calf" as CA2, an adult female, and her companion as CA6, also an adult female. Both belong to the L.A. Pod, a cetacean gang so strange a better moniker might be the "Odd Pod."

Clash of the Titans

Killer Whale
(Orcinus orca) Great White Shark
(Carcharodon carcharias)
Length 23 to 30 feet 12 to 21 feet
Maximum weight 13,000+ pounds 5,000+ pounds
Lifespan Up to 90 years Unknown
Social
Behavior Lives in highly social family Primarily Solitary
Hunts Like A pack of wolves,
relying on group cooperation A solitary feline, using the art of surprise
Reproduction Gives birth every 3-10 years,
twins have never been documented Unknown
Teeth Keeps one set of teeth
throughout entire lifetime Continuously sheds and replaces teeth
"They are very intriguing," says Schulman-Janiger. "They don't fit into any known group of killer whales. They look different. They are small, almost like pygmies. Their vocalizations don't match any other killer whales' from anywhere." Other killer whale groups specialize, preying upon either fish or marine mammals, but the L.A. Pod "is kind of opportunistic," says Schulman-Janiger. "They feed on fish, squid and sea lions."

Schulman-Janiger and Pyle think the attacked Farallon shark, a naïve subadult, was attracted to the area by the sea lion kill. As the sea lion drifted toward the rocks, CA2 may have felt threatened by the shark's presence. "I think she rammed the shark underwater," says Schulman-Janiger. "She probably hit it hard and shook it."

L.A. Pod whales were sighted around the Farallones four more times that fall. If the killer whales were "shark repellants," how did the sharks know they were there?

In the 1970s, Pete Klimley, a marine biologist at the University of California–Davis, played killer whale vocalizations to silky sharks off Florida. The sharks bolted "as if shot from a cannon," says Klimley. He then created a killer whale costume from an old wetsuit, plywood and boat paint. Klimley's Shamu act produced mixed results: A captive lemon shark tried to bite him on the head, while silky and whitetip sharks had to be shoved away to prevent their curious nature and razor-sharp teeth from getting the best of the intrepid biologist. Understandably, Klimley has never risked this experiment with a white shark.

Whether the Farallon sharks recognized the killer whales by sight or by sound, the presence of the whales did appear to trigger their hasty exodus. Humans fear the great white shark as the ultimate predator; the sharks may perceive their rank differently.

But evasive action doesn't always work. Three years after the mysterious 1997 attack in the Farollones, a killer whale most likely struck again.

The whale was sighted in November at virtually the same spot as the first attack. "It had a big chunk of white flesh in its mouth," says Pyle. "Yet there was very little blood in the water, so it probably wasn't eating a marine mammal." By the time Pyle arrived, gulls had gobbled every tidbit large enough for DNA analysis. Afterward, just as in 1997, the white sharks disappeared.

A VIEW FROM SPACE
Chasing The Great White
On a chilly fall morning, Peter Pyle and Scot Anderson sit in a dinghy just off Southeast Farallon Island, a favorite haul-out for sea lions and juvenile elephant seals. Jellyfish float like pale lanterns through the frigid sea. A larger form glides past: a great white shark on patrol.

If you're a biologist seeking a study subject, you couldn't pick a worse species than Carcharodon carcharias. The great white shark is rare, usually difficult to observe, impossible to maintain in captivity and potentially lethal. No one knows where white sharks breed, how long they live or how many exist. The annual congregation of white sharks at the Farallones, however, offers a unique opportunity.

"This is probably the best place in the world to study white sharks," says Pyle, who recently left his post at Point Reyes Bird Observatory (PRBO) to join the Institute for Bird Populations. "They can be observed naturally, without putting chum in the water.

"By identifying individuals such as Cuttail, Tipfin, Spotty, ZZ Top, Emma, Bitehead and Cal Ripfin with pole-mounted underwater cameras, Pyle and Anderson are learning about the sharks' population structure, residency patterns and survivorship. They've discovered males visit the Farallones annually in fall, while females appear every other year. But where do the sharks spend the "off-season"?

In 1999 and 2000, Pyle and Anderson used an 8-foot pole to attach pop-up satellite tags to four white sharks. The high-tech tags recorded water depth, temperature and light levels every two minutes for six months and then popped to the surface and transmitted the stored data to an orbiting satellite.

The shark data stunned scientists. The white sharks weren't coastline-huggers, as they assumed; the animals were open-ocean wanderers. Most of the sharks journeyed about 1,000 miles into the Eastern Pacific, roughly midway between Hawaii and Baja California. Tipfin swam 2,280 miles to Hawaii, where he spent the winter and spring before returning to the Farallones.

Tipfin's excursion was no fluke. When he was re-tagged in fall 2001, the Marco Polo of sharks once again visited Hawaii. All other sharks tagged in 2001 and 2002 headed for the Eastern Pacific.

"Possibly the males are looking for females in those waters," says Pyle. "Since the females return to the Farallones every other year, we'll need longer-term tags to follow the females' entire breeding cycle."

Learning more about white shark reproduction and migration could lead to more effective conservation. The sharks probably live long and reproduce slowly, making the species highly vulnerable to overfishing. White sharks are now protected in Australia, South Africa, Malta, California and along the U.S. East Coast and the Gulf of Mexico. But a proposal to list white sharks under Appendix II of the Convention on International Trade in Endangered Species to prevent the slaughter of white sharks for their fins, cartilage, teeth, jaws and other parts failed in 2000.

Pyle says he's seen a sea change in attitudes since 1982, when a local fisherman killed four white sharks at the Farallones. "He was lauded as a hero," says Pyle. "Now people are asking, 'How can we help the sharks?'" —Pamela S. Turner

Schulman-Janiger recently analyzed photos taken the day of the 2000 attack in an attempt to see if it was one of the whales videotaped and photographed in 1997. Though unable to confirm the identity of the individual, she is certain it wasn't from the distinctive L.A. Pod. In fact, the L.A. Pod seems to have vanished. No member has been sighted since December 1997.

Although Pyle couldn't confirm a white shark was killed in 2000, he did learn how one reacted. Tipfin, a 15-foot male, was carrying a satellite tag that Pyle and colleague Scot Anderson had attached the month before. When the tag popped off six months later and transmitted its stored data, the researchers had an almost minute-by-minute account of Tipfin's movements.

"On the hour of the attack, Tipfin abruptly dropped to 500 meters and headed west," says Pyle. "He swam all the way to Hawaii."

Given the rarity of observed white shark encounters with killer whales, scientists may never fully comprehend the true relationship between these two great predators, linked by a common ecological niche, an evolutionary contest and perhaps also by mutual enmity. The vast and mysterious sea veils even the struggles of its titans.

Science writer Pamela S. Turner has been scuba diving off the coast of Northern California for twenty years. She has never seen a great white shark underwater—and is quite happy about that.