The ruffed grouse is well equipped to survive harsh winters. Can it also survive changing land-use patterns in some areas? 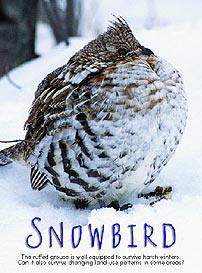 WALKING through snow-covered woods in central Pennsylvania one winter day, Mark Banker spotted a dark, irregular shape protruding through the smooth blanket of gleaming white. It looked like the stub of a broken sapling, but suddenly the "stub" moved and Banker caught the gleam of a bright eye. A ruffed grouse, hidden beneath the snow, had popped its head out to reconnoiter.

Ruffed grouse—chicken-sized, forest-dwelling birds—are well-equipped for winter, says Banker, a biologist with the nonprofit Ruffed Grouse Society. In autumn, as cold weather approaches, ruffed grouse sprout extra feathers on their shins that resemble leggings. Meanwhile, their toes sprout modified hairs called pectinations that enable the birds to walk on top of snow and slippery surfaces. And when the snow is ten inches or more deep, ruffed grouse—like the Inuit people of the Arctic—take advantage of its insulating properties. They use snow as a temporary shelter.

For the Inuit, this means cutting snow blocks with a saw, then stacking them in a neat spiral. But grouse don't need tools or techniques to make a snow shelter, notes Virginia Polytechnic Institute biologist Dean Stauffer, who has studied the birds in winter in Idaho's Wasatch Mountains. "They just kind of tuck their wings up and crash into the snow," he says.

Snug beneath the snow, ruffed grouse doze away the coldest winter days in relative comfort, enjoying an ambient temperature that can be 30 to 40 degrees F warmer than the snow's surface. Roosting under snow protects them, not only from the cold, but also from the sharp eyes of predators such as foxes and coyotes. (After the initial snow dive, the birds may burrow horizontally for a couple of feet to foil any predators that find the snow cave's entrance.) During extremely cold weather, ruffed grouse emerge for just a few minutes each day, at dawn and dusk, to gobble a quick meal of protein-packed aspen buds.

ADAPTED FOR COLD: Among North America's most widely distributed game birds, the ruffed grouse thrives in snow-covered woodlands. During winter, it grows extra feathers on its shins and its toes sprout modified hairs that enable it to walk on top of deep snow.

Among North America's most widely distributed game birds, ruffed grouse occur in 38 of the lower 48 states, all of the Canadian provinces and north into Alaska. They are prolific birds—a female typically lays about 11 eggs in her leafy nest on the forest floor. As a result, grouse populations in parts of the northern and western United States are stable, and sustain the hunting of hundreds of thousands of grouse a year in some states.

But although ruffed grouse aren't headed for the Endangered Species List anytime soon, there still is cause for concern. Research shows that the birds' numbers have decreased in several areas of the country. Studies conducted over the past 50 years, for example, show that grouse populations in the central Appalachians are steadily declining. What's going on? The experts would like to know the answer before the situation becomes critical.

To get a grouse's-eye view of what makes good habitat for a grouse, Banker leads the way along a logging road on a sunny morning in June. The Scotia Range in central Pennsylvania is a hilly forest tract dominated by oak and aspen. For the past half century, land managers have been clear-cutting patches of forest here; Pennsylvania Game Commission biologists are evaluating different forest management strategies to see which one produces the most grouse. "You won't find habitat more intensively managed for grouse anywhere," Banker notes.

An expanse of intact oak forest serves as a "control" for clear-cut "treatments." Ruffed grouse do occur in mature forests—tangles of mountain laurel and rhododendron, which keep their glossy green leaves all winter, provide shelter, and acorns are a protein-rich food. But overall, grouse numbers here are low.

On the logging road, Banker pauses by a grove of big-toothed aspen. These are young trees, perhaps ten years old. The skinny trunks, about the diameter of broomsticks, grow more than head-high but less than shoulders' width apart. A grouse can take refuge from predators in these trees. "Hawks and owls both prey on ruffed grouse," Banker says. "But with their wide wingspans, they can't fly through such dense woods."

Along the sandy road, yellow vetch, clover and wild strawberry spread in green mounds. The leaves and flower buds are good grouse food. Among the fresh greenery, grasshoppers ricochet like popcorn on a hot skillet. "This is a great place for grouse to raise chicks," says the researcher. "They can find insects in the open spaces, but still be close to cover." He points out a fresh grouse track in the damp sand. 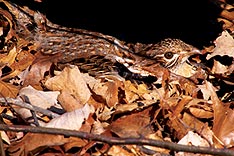 CAMOUFLAGED: Ruffed grouse such as this nesting bird typically produce 11 eggs at a time. As a result, their populations are stable in parts of the northern and western United States. But recent research shows that the birds' numbers have declined in several other areas of the country, leading researchers to reevaluate some of their habitat-management tactics.

Farther along the road is a forest patch that contains both big-toothed and quaking aspen. These are older, taller trees, and the individual tree trunks are more widely spaced. But the grove is still a dense tangle—a good place for grouse to take cover. The aspen buds will provide nutritious food all fall and winter, when green leaves and berries are no longer available; in the spring, the birds will gorge on the caterpillar-shaped catkins that burst forth.

Nearby is a fresh clear-cut. The breeze carries the scent of sweet gale and the sound of birdsong—the raucous drink-your-tea-ee-ee song of an eastern towhee, and then, a soft bee-bzz-bzz. Banker points out a tiny gray bird flitting from branch to branch—a golden-winged warbler. Goldenwing populations have decreased by 71 percent in the past 35 years, according to the U.S. Fish and Wildlife Service's Breeding Bird Survey.

"Goldenwings nest on the ground, so here in the clear-cut, the herbaceous cover that grows up provides protection," Banker notes. "When the forest grows up, the ground cover gets shaded out, and the birds have to move on." Though the Scotia Range is managed for grouse, it is also a haven for the warblers, found in few other places in the state.

"If you provide habitat for ruffed grouse, it's going to benefit a lot of other species," says Richard Yahner, a biologist at Pennsylvania State University. The berry bushes that sprout in the sunny clearings feed bears in autumn, while deer browse on tender foliage in spring.

The yellow-breasted chat and indigo bunting are just two of the birds that, like ruffed grouse, rely on early-succession forest—and that, like the ruffed grouse, are still numerous but showing declines. "The chestnut-sided warbler, which breeds in second-growth forest, is one of the seven fastest declining species in this state," Yahner notes. "Eastern towhees—okay, they're still very common, but Pennsylvania populations are declining 4 percent a year." According to the Breeding Bird Survey, 46 percent of the bird species that depend on young forests are currently declining in the eastern United States.

How did grouse, and other early-successional species, manage to survive before wildlife biologists came along with chain saws? Most likely forest fires maintained a mosaic of habitat types.

Today, a number of societal factors interfere with forest regeneration, such as the longstanding (and only recently reconsidered) national policy of fire suppression. What's more, in the East in particular, land ownership patterns are changing. "What we are seeing is private tracts being subdivided into smaller and smaller lots," says Dan Dessecker, a Ruffed Grouse Society biologist. A study of land use in the eastern United States recorded the size of privately owned forest tracts; in 1978, less than a third of all tracts were smaller than 40 hectares. By 1994, the proportion had increased to nearly half of all properties.

In many cases, people are buying such land as an investment. "But even when the land is not developed," Dessecker says, "the data show that as the size of the holding declines, the likelihood of active management also declines."

If future studies confirm that the aging of eastern forests is harming grouse, changing public attitudes about forest management will not be easy. "People don't like to hear that scientists have changed their minds about something," says Yahner.

Rain threatens on a cold morning in October. Banker is walking the Scotia Range trails again, this time with his English setter Bode. Bode weaves his way tirelessly through the undergrowth and, several times, holds a point. Each time Banker investigates, the grouse has slipped away through the tangle of tree limbs and leaves.

Out on the road, though, there is a little mound of brown and white feathers. Most likely, this grouse was taken by a raptor. Inexperienced young birds tend to burst into flight instead of freezing or walking away, making them easy targets for predators. Yet enough will survive until winter, when a blanket of snow covers the ground—bringing desperate hunger for other forest creatures, but comfort and safety for the grouse.