The Baboon with the Bleeding Heart

High in the remote mountain meadows of Ethiopia, a lone photographer seeks to capture on film the last of the world's grass-eating primates, the gelada baboon 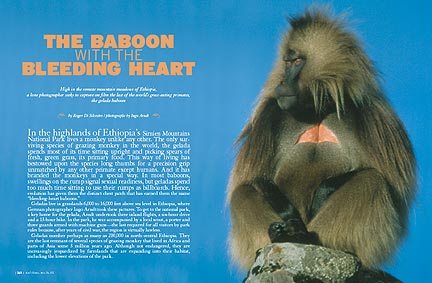 IN THE HIGHLANDS of Ethiopia's Simien Mountains National Park lives a monkey unlike any other. The only surviving species of grazing monkey in the world, the gelada spends most of its time sitting upright and picking spears of fresh, green grass, its primary food. This way of living has bestowed upon the species long thumbs for a precision grip unmatched by any other primate except humans. And it has branded the monkeys in a special way. In most baboons, swellings on the rump signal sexual readiness, but geladas spend too much time sitting to use their rumps as billboards. Hence, evolution has given them the distinct chest patch that has earned them the name "bleeding-heart baboons." 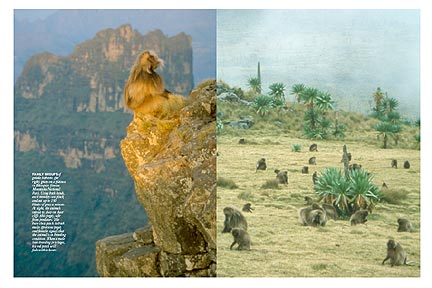 FAMILY GROUPS of gelada baboons (right) graze on a plateau in Ethiopia's Simien Mountains National Park. Using both hands, each monkey can pluck and eat up to 150 blades of grass a minute. At night, the animals retreat to sleep on sheer cliffs (left), safe from predators. The bare chest patch in both males (previous page) and females signals that the animal is in breeding condition. When a male loses breeding privileges, his red patch will fade within hours.


Geladas live in grasslands 6,000 to 16,000 feet above sea level in Ethiopia, where German photographer Ingo Arndt took these pictures. To get to the national park, a key home for the gelada, Arndt undertook three inland flights, a six-hour drive and a 13-hour hike. In the park, he was accompanied by a local scout, a porter and three guards armed with machine guns—the last required for all visitors by park rules because, after years of civil war, the region is virtually lawless. 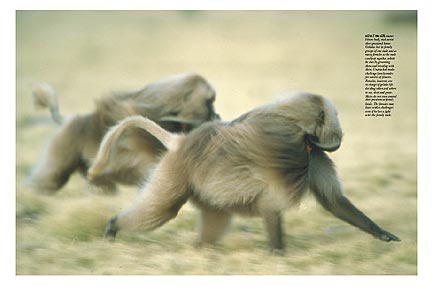 ADULT MALES, manes blown back, rush across their grassland home. Geladas live in family groups of one male and as many females as the male can keep together, which he does by grooming them and breeding with them. Unattached males challenge family males for control of females. Females, however, are in charge of gelada life, deciding when and where to eat, sleep and graze. Males do not even control their positions as family heads. The females may leave with a challenger, even if he lost a fight with the family male.


Geladas number perhaps as many as 200,000 in north-central Ethiopia. They are the last remnant of several species of grazing monkey that lived in Africa and parts of Asia some 3 million years ago. Although not endangered, they are increasingly jeopardized by farmlands that are expanding into their habitat, including the lower elevations of the park. 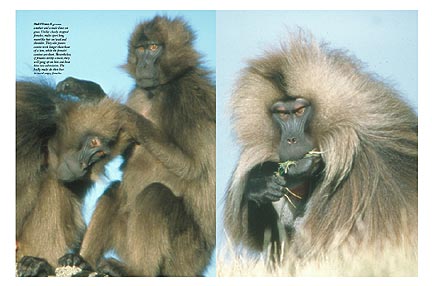 ONE FEMALE grooms another and a male dines on grass. Unlike closely cropped females, males sport long, manelike hair on heads and shoulders. They also possess canine teeth longer than those of a lion, while the females' canines are short. Nevertheless, if females dislike a male, they will gang up on him and beat him into submission. The bulky males do their best to avoid angry females.