Inhospitable to humans, New Zealand's harsh and nearly pristine subantarctic islands are a haven for birds and other wildlife 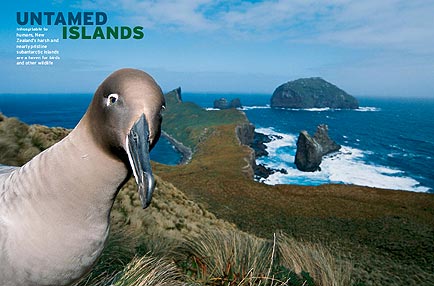 AT THE BOTTOM OF THE PLANET lies a doughnut of ocean rarely acknowledged in world atlases—lost between the southern tips of inhabited continents and the icy shores of Antarctica—known simply as the Southern Ocean. Its waters encompass the extreme reaches of the Pacific, Atlantic and Indian Oceans in a band where ever-present storms rip and roar around the Earth unimpeded by major landmasses. Like crumbs in a maelstrom, only a handful of tiny island groups are strewn about this vastness along latitudes known as the Roaring Forties, Furious Fifties and Screaming Sixties. Of these, two small clusters, Campbell and Auckland Islands, stand out as southernmost bastions in New Zealand's impressive roster of strictly protected island reserves. Crown jewels among the nation's many conservation treasures, the islands are uninhabited and largely unspoiled by humans. 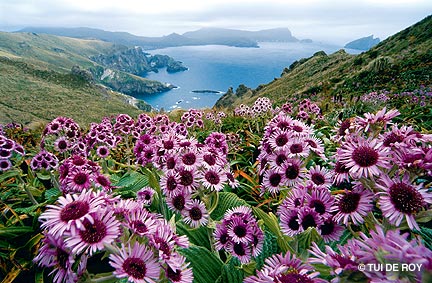 A cold, windy and wet climate, with temperatures that fluctuate little year-round, has given rise to unique plant communities called megaherbs. Cabbagelike leaves that can grow two feet long hug the ground for warmth, while sturdy stalks brave wind and hail, turning bleak summit ridges into gaudy fields of flowers during the fleeting weeks of summer, which come at Christmas in the Southern Hemisphere. Native plants such as these once again dominate the islands, thanks to New Zealand's Department of Conservation, which has removed thousands of sheep and, more recently, rats. On neighboring Auckland Islands, goats, cattle and rabbits have likewise been eliminated—all legacies of unsuccessful attempts by humans to colonize the islands.


This was not always the case. Many hundreds of years ago, Pacific Islands people established a beachhead on these storm-lashed shores. Much later came waves of Europeans who hunted seals, whales and penguins for furs, feathers and oil. In the mid-1800s, enthusiastic farmers from England even attempted to establish an independent colony. But the islands remained utterly untamable, and without exception all of these human endeavors failed. Today the New Zealand government keeps human activity—primarily for conservation and scientific research—to an absolute minimum. Nature is clearly in charge.

Screaming winds exceed 60 miles per hour on more than 100 days a year, and blow more than 40 miles per hour about three-quarters of the time. Rain falls on 325 days, and average temperatures hover in the mid-forties (Fahrenheit). Yet each summer albatross, petrels, penguins and seals flock by the millions across this bountiful ocean to the islands' bleak cliff tops and secluded coves to breed. In winter southern right whales do the same in sheltered bays. Along the shore, deep fjords gouged out of volcanic rock by Ice Age glaciers are lined with lush elfin forests filled with melodious bellbirds and neon-hued parakeets, incongruous reminders of more tropical climes. 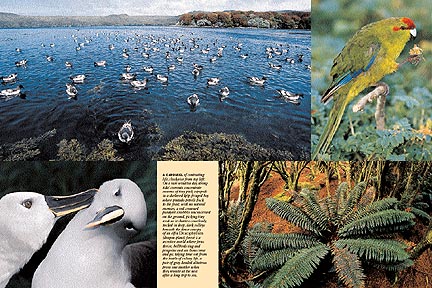 It took years of planning to accomplish my goal of documenting this ultimate wildlife frontier with my camera. To do so, my partner Mark Jones and I outfitted our own sturdy expedition vessel, Mahalia, a 43-foot steel sailing yacht. For nearly four months—during which we had almost no contact with the outside world—we lost ourselves on the islands, exploring virtually every nook and cranny of their uncharted coasts and wind-sculpted crags. We marveled at jabbering penguin colonies and courting albatross dances, at surf-pounded cliffs and damp fern glades where sea lion pups play, and at snaking waterfalls spilling from high bluffs only to be curled back up with the wind, never reaching the sea below. The photographs on this page are the result of this finally fulfilled dream.