A writer floats down Alaska's mighty Copper River to its delta, a virtually unspoiled, 700,000-acre wildlife haven that may be jeopardized by development 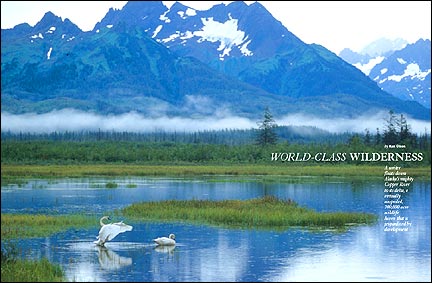 A HARBOR SEAL bursts from the cloudy water next to our raft, as startled to find us floating down Alaska's Copper River as we are by its sudden appearance 40 miles from the ocean. The animal blinks, dives and resurfaces several yards away--a distance it will maintain as it tracks us downriver for the next half hour.

Four days into the most overpowering river adventure I've ever experienced, the seal's baffled reaction is both refreshing and disturbing. It rekindles the ambivalence I feel when we land on Copper River beaches and find the gray glacial silt trampled with grizzly, wolf and moose tracks. As if they have to scatter now that we are here.

"This is a true wilderness experience," says my companion, Sundog Expeditions co-owner Lonnie Hutson, leaning into the oars to keep the river's powerful currents from wrenching us off course. "You see it in the wildlife--how the animals are not habituated to humans." As a result, I've never felt like such an intruder, or been so grateful that climate, geography and circumstance have kept this vast mix of rain forest and glaciers, tundra and wetlands, mountain peaks and river canyons largely out of reach of development.

At least until now.

Today the Copper River and its fertile, 700,000-acre delta--which nurtures legendary salmon runs and one of the Western Hemisphere's most important migratory bird havens--face significant changes, from proposed new roads and tourist developments to possible mining, logging and oil drilling operations. Jim Adams, legal counsel for NWF's Alaska Project Office, calls the region "a wilderness that's too valuable to risk or waste." Yet it will be incrementally eaten away, he adds, "one road, one oil well and one clear cut at a time."

To endure its strenuous 300-mile-journey inland to spawn, a Copper River salmon builds up large reserves of fatty oils, which produce the fish's distinctive flavor.

It's easy to forget such warnings as we begin our seven-day journey 100 miles inland, with the majestic Wrangell range rising at our backs and the Chugach range on the horizon. The river's mighty hydraulics continually tug at our 18-foot, inflatable rafts while a cold, stiff wind numbs our faces. Not only are our senses completely absorbed, but in this country we are small--and we are constantly reminded of that.

By every adjective, superlative or other description--all of them inadequate--the Copper River changes one's measure of magnificence and immensity. The state's fifth-largest river, it begins at the 19,900-foot summit of Mount Logan in Canada's Yukon Territory and sweeps into Alaska to form the western boundary of Wrangell-St. Elias National Park, the country's largest. The river drains 23,000 square miles--a watershed nearly the size of West Virginia--and moves a million tons of glacial sediment on an average summer day. Its chalky gray waters are so silt-laden that the river hisses like seltzer water as it shifts its load downstream. 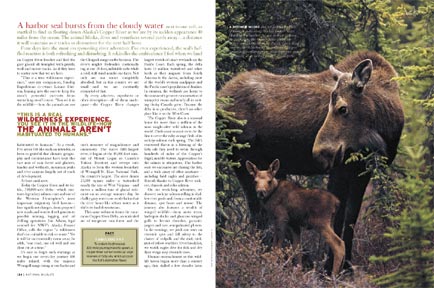 A MOTHER MOOSE and her calf have plenty of room to roam along Alaska's Copper River. Draining a watershed the size of West Virginia, the river forms the Copper River Delta, the largest intact wetland on the Pacific Coast.

This same sediment forms the enormous Copper River Delta, an unrivaled arc of temperate rain forest and the largest stretch of intact wetlands on the Pacific Coast. Each spring, the delta hosts 16 million waterfowl and other birds as they migrate from South America to the Arctic, including most of the world's western sandpipers and the Pacific coast's population of dunlins. In summer, the wetlands are home to the continent's greatest concentration of trumpeter swans and nearly all its nesting dusky Canada geese. Because the delta is so productive, there's no other place like it on the West Coast.

The Copper River also is a seasonal home for more than a million of the most sought-after wild salmon in the world. Chefs coast to coast vie to be the first to serve the ruby-orange flesh of its sockeye salmon each spring. The fish's renowned flavor is a blessing of the fatty oils they need to swim through hundreds of miles of the Copper's frigid, muddy waters. Appreciation for the salmon is ubiquitous. The harbor seals we encounter are chasing the fish, and a wide array of other creatures--including bald eagles and grizzlies--flourish thanks to Copper River sockeye, chinook and coho salmon.

On our week-long adventure, we discover sockeye salmon rolling in shallow river pools and, from a comfortable distance, spot bears and moose. The journey also features a wealth of winged wildlife--from arctic terns, harlequin ducks and glaucous-winged gulls to hermit thrushes, parasitic jaegers and rare, semipalmated plovers. In the evenings, we pitch our tents on riverside spits and fall asleep to the chatter of redpolls and the titch, titch, titch of yellow warblers. Over breakfast, we watch eagles dive for fish and dry their wings atop riverside trees. 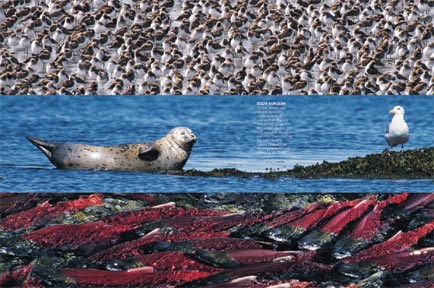 DELTA DENIZENS include dunlins and western sandpipers (top)--among 16 million birds that stop here during spring migration--harbor seals and gulls (middle); and more than a million migratory sockeye salmon (bottom), the most highly prized wild salmon in the world.

Human encroachment on this wild-life haven began more than a century ago, then stalled a few decades later. The river, in fact, takes its name from the world's richest copper deposits, which were sold to U.S. prospectors for a food cache by an Ahtna native chief in 1899. In the early 1900s, wealthy industrialists built the Copper River & Northwestern Railway along nearly 100 miles of the river and hauled away $100 million of ore until the mine and rail line were abandoned in 1938. In the ensuing decades, some people lobbied to turn the old railroad route into a highway that would draw more tourists to Cordova. But the river does not yield easily: From our raft, I can see where it has erased mile after mile of the old railroad, occasionally leaving a dangling pair of rusting rails or the skeleton of a disintegrating trestle. More often there is no trace of the tracks, just lush alder slopes, gritty glacial-silt dunes, tree-topped canyons and mountains that rise from sea level to 6,000 feet.

Soon that may change. The state of Alaska is spending $16 million to restore the Million Dollar Bridge (named for its copper-mining-days price tag), a strong sign that the state's plans for a highway--and the development it would spawn--are increasingly serious. Even without a road, "it's inevitable that you are going to see more development on the Copper River--from lodges to jet boats," says Ross Mullins, a Cordova commercial fisherman who wants to protect the area. Already, one outfitter is running a jet boat operation on the lower portion of the river.

Upriver, meanwhile, the aging Alyeska pipeline traverses 150 miles of the Copper River watershed, paralleling the river and crossing several tributaries. Because the pipeline has been in service so long, and concerns about its condition ignored, "one of the greatest current threats to the Copper is a spill from the pipeline," says wilderness guide and former commercial fisherman David Grimes. Downriver near Katalla, on the eastern edge of the delta, a more recent danger is the prospect of oil pollution from ongoing exploratory drilling. Even if a spill from the Alyeska pipeline or from a well at Katalla misses the river's salmon runs, the mere mention of oil pollution could ruin the reputation for wild, pure salmon that fishermen have parlayed into a global marketing tool. "This is a food industry," says Mullins. "Put that together with oil, and it could have devastating consequences--kind of like mad cow disease." 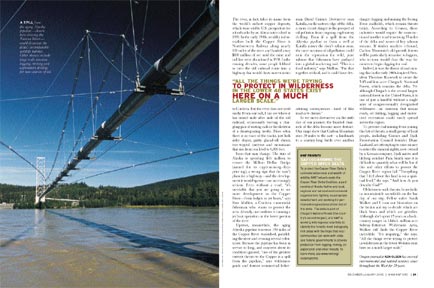 A SPILL from the aging Alyeska pipeline--shown here crossing the Tanana River--could devastate the delta's incomparable wildlife habitat. Other threats include large-scale tourism, logging, mining and exploratory drilling for new sources of oil.

As we move downriver on the sixth day of our journey, the braided channels of the delta become more distinct. Our maps show that Carbon Mountain rises 30 miles to the east--a landmark to a century-long battle over another danger: logging and mining the Bering River coalfields, which remain threats today. According to Grimes, these industries would require the construction of another road traversing 55 miles of the delta and scores of key salmon streams. If timber markets rebound, Carbon Mountain's old-growth forests will be particularly attractive to loggers, who in turn would clear the way for miners to begin digging for coal.

Indeed, it was the threat of coal mining that in the early 1900s inspired President Theodore Roosevelt to create the 5.45-million-acre Chugach National Forest, which contains the delta. Yet although Chugach is the second largest national forest in the United States, it is one of just a handful without a single acre of congressionally designated wilderness--an omission that means roads, oil drilling, logging and motorized recreation could easily spread across the region.

To protect the Copper River Delta's unrivaled wilderness and wealth of wildlife, NWF helped create the Copper River Delta Coalition, a partnership of Alaska Native and local, regional and national environmental organizations fighting inappropriate development and working for permanent congressional protection of the delta. The delta is part of Chugach National Forest (the country's second-largest), and NWF is working with regional scientists to identify the forest's most biologically rich areas with the hope that local communities can work with state and federal governments to provide protection from logging, mining, oil exploration and other threats. To learn more, see NWF's Programs.

To prevent coal mining from joining this list of threats, a small group of local people, including Grimes and Eyak Preservation Council founder Dune Lankard, are attempting to raise money to retire the mineral rights, now owned by a Korean company. Eyak native and lifelong resident Pam Smith says it is difficult to quantify what will be lost if this and other efforts to protect the Copper River region fail. "Everything that I feel about this land is on a spiritual level," she says. "And how do you describe God?"

Oblivious to such threats, bears frolic in mountainside snowfields on the last day of our trip. Fellow rafter Sarah Walker and I train our binoculars on the bruins and try to decide which are black bears and which are grizzlies. Although she's spent 15 years as a backcountry ranger in Idaho's million-acre Selway-Bitteroot Wilderness Area, Walker still finds the Copper River incredible.

"It's inspiring," she says. "All the things we're trying to protect in wilderness in the lower 48 states exist here on a much larger scale."

Oregon journalist Ken Olsen has covered environmental and natural resource issues throughout the West for 20 years.