"Z" Is for Biodiversity 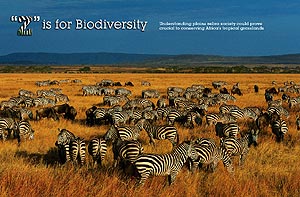 THE DRY SEASON grips the highland savanna of eastern Africa between late May and early June. As the relentless sun drives the last bit of moisture from the soil, the verdant highlands shrivel to yellow and brown. Herds of antelope, gazelle, wildebeest, elephant and buffalo gather by the hundreds of thousands, chafing to begin their annual migration to the lowlands to find water. Lions, hyenas and other predators likewise ready themselves to follow their prey on the seasonal journey.

But none can leave the depleted highlands until the plains zebra departs—and readies lowland grasses for the grazers that follow. "They start the whole grazing succession," says Princeton University ecologist Daniel Rubenstein, who has been studying the species for the past 15 years. Because zebras have an unusual hindgut digestive system rich in fermenting microbes, they can gorge on the low-quality coarse straw available at the start of the rainy season. Buried beneath this sunlight-blocking thatch lies the tender new growth upon which all other grazers depend. This means that from the vast, acacia-dotted savannas of the Serengeti, south through Zambia’s scrubby woodlands and the treeless veldt of South Africa, the plains zebra plays an unmatched role in maintaining some of the most biologically diverse habitat on the planet. 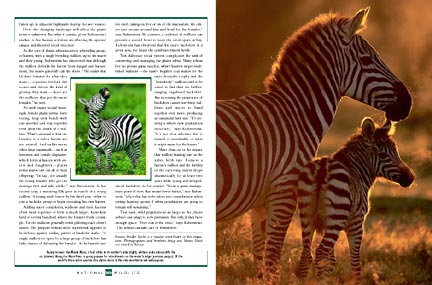 Consequently, the long-term conservation of Africa’s tropical grasslands relies on the wise stewardship of this linchpin species, says Rubenstein. In partnership with the African Wildlife Foundation and Earthwatch Institute, he currently heads a broad-based project aimed at integrating zebra conservation with the rapid growth of agriculture, livestock and game-ranching industries in eastern Africa.

To the tourist on safari, the plains zebra certainly looks to be thriving. Indeed, where these zebras still occur, their inimitable stripes dominate the landscape, with a population of nearly 665,000, dwarfing that of its two gravely endangered cousins—the Grevy’s zebra of Kenya and the mountain zebra of Namibia and South Africa.

"But if you actually look at the details," says Rubenstein, "you see that the plains zebra has been extirpated from much of its historic range." Today, 70 percent of its population concentrates in just two countries, Kenya and Tanzania. Ecotourism dollars have enabled these nations to protect large swaths of lowland zebra habitat inside national parks. But just outside park borders, farms and ranches have sprung up to block many of the age-old migration routes that zebras need to cross between dry season refuges and lusher uplands. Though the lengths of these migration routes vary widely, many populations travel hundreds of miles a year. 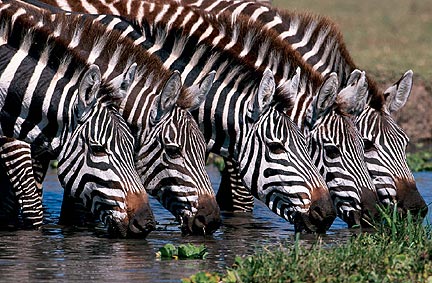 ALONG THE MARA RIVER, a group of plains zebras pauses for refreshments on the water’s edge. Of the world’s three zebra species, the plains zebra is the only one that is not endangered.


In Tanzania, for example,"there used to be nine migratory routes out of Tarangire National Park," says Rubenstein. "Now there are only two or three left, all on privately owned land." Because of the low quality of their grasses, dry-season refuges such as Tarangire can’t support large populations of zebras unless the animals can fatten up in adjacent highlands during the wet season.

How this changing landscape will affect the plains zebra is unknown. But what is certain, given Rubenstein’s studies, is that human activities are affecting the species’ unique multilayered social structure.

At the core of plains zebra society is a breeding group, or harem, with a single breeding stallion, up to six mares and their young. Rubenstein has discovered that although the stallion defends his harem from danger and harassment, the mares generally call the shots. "The males that let their females do what they want—organize behind the scenes and choose the kind of grazing they want—those are the stallions that get the most females," he says.

As with many social mammals, female plains zebras form strong, long-term bonds with one another and stay together even after the death of a stallion. What’s unusual is that the females in a zebra harem are not related. And unlike many other large mammals—such as lionesses and female elephants, which form alliances with sisters and daughters—plains zebra mares cast out all of their offspring. "In fact, it’s usually the young females who get the message first and take a hike," says Rubenstein. In her second year, a maturing filly goes in search of a young stallion. A young male leaves by his third year, either to join a bachelor group or begin recruiting his own harem.

Adding more complexity, stallions and their harems often band together to form a much larger, loose-knit herd of several hundred, where the females freely comingle. Yet the stallions generally resist pilfering each other’s mares. The purpose behind these superherds appears to be defense against raiding parties of bachelor males. "A single stallion set upon by a large group of bachelors has little chance of defending his females. As he barrels into the mob, taking on five or six of the marauders, the others just stream around him and head for the females," says Rubenstein. By contrast, a coalition of stallions can present a united front to keep the interlopers at bay. Rubenstein has observed that the more bachelors in a given area, the larger the combined-harem herds. 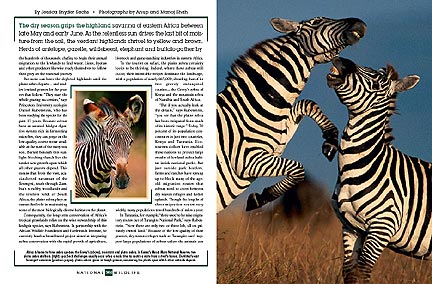 This elaborate social system complicates the task of conserving and managing the plains zebra. Many zebras live on private game ranches, where hunters target established stallions—the male’s brighter coat makes for the most desirable trophy and the "homebody" stallions tend to be easier to find than the farther-ranging, vagabond bachelors. But increasing the proportion of bachelors causes surviving stallions and mares to band together even more, producing an unnatural herd size. "It’s creating a whole new population structure," says Rubenstein, "It’s not clear whether this is natural or sustainable, or what it might mean for the future."

More clear-cut is the impact that stallion hunting has on the zebra birth rate. Remove a harem’s stallion and the fertility of the surviving mares drops dramatically for at least two years while young and inexperienced bachelors vie for control. "From a game management point of view, that means fewer babies," says Rubenstein, "a fact that has to be taken into consideration when setting hunting quotas if zebra populations are going to remain self-sustaining."

That said, wild populations as large as the plains zebra’s can adapt to new pressures. But only if they have enough space. "Free run is the issue," says Rubenstein. "The zebras can take care of themselves."

Jessica Snyder Sachs is a regular contributor to this magazine.