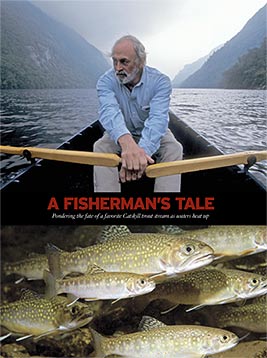 LATE NOVEMBER is not the best time to take the pulse of trout streams in the northeastern United States. But when a Thanksgiving Day commitment posted me to the Catskill Mountains of New York State, I decided nevertheless to break away from the main course to see how some famous waters I used to fish were holding up in this contentious age of global warming.

It had been a dozen years since my last cast on a Catskill stream, even longer since I’d waded the riffles and runs of the Beaverkill River and Willowemoc Creek, which mingle their waters at a place called Junction Pool, at the edge of a village called Roscoe, still known roundabout as “Trout Town USA.” Aging, alas, had remanded my fly rods to the closet, so I’d have to be content to sprinkle a pinch of nostalgia on what I expected could turn out to be a platter of climatic bad news.

Bad news, or the premature prediction of it, has often been my passport to the Catskills. As a journalist, I had come to Roscoe in the 1960s to chronicle the construction of a highway, called the Quickway, that would bridge the Willowemoc and the Beaverkill ten times in half as many miles. I ended up reporting how the pylons of those bridges might destroy the in-stream habitat of the “Beamoc,” as the merged streams are called below Junction Pool, and ultimately unravel a world-class fishery. It turned out that my pessimistic informants were only half right. What made them half wrong over the years would be intensive stocking of put-and-take brown and rainbow trout by the New York State Department of Environmental Conservation.

Next, alarms were sounded at the prospect of a huge resort development with the capacity to dump 300,000 gallons of treated sewage a day into the Beamoc. So the bad-news scriveners gathered round to file yet another riparian obituary, even as the developer’s grand plan—and its potential for sewage—evaporated into thin air.

Now, here I was again, looking for trouble in Trout Town USA. And despite those false alarms of yesteryear, this time I had every reason to expect grim prospects, for global warming was much in the news: melting glaciers, rising seas, precipitous storms, diminishing numbers of Arctic mammals and a growing body of evidence that the meltdown could soon affect the future of cold-water fisheries across North America.

One of the early warnings was sounded in National Wildlife in summer 2002. In an article titled “North America’s Fish Feel the Heat,” T. Edward Nickens reported some worrisome findings, including one study predicting that a 5-degree-F increase in the average July air temperature could wipe out half of all suitable trout range in the Rocky Mountains over the next half century. A symposium on “Fisheries in a Changing Climate,” sponsored by the American Fisheries Society, had released a similar finding the previous year about trout habitat in the southern Appalachians, and in Canada the Ontario Ministry of Natural Resources cited studies showing that increases in fall temperatures in eastern Lake Ontario were having “a major negative effect” on lake trout hatchlings. In 2002, Defenders of Wildlife and the Natural Resources Defense Council published a report indicating that brown, brook and rainbow trout across the nation would lose as much as 38 percent of their habitat to global warming by 2090. 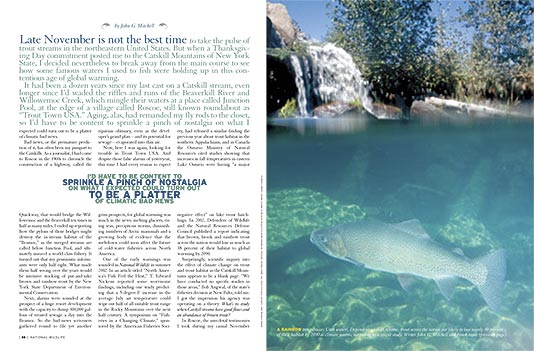 Surprisingly, scientific inquiry into the effect of climate change on trout and trout habitat in the Catskill Mountains appears to be a blank page. “We have conducted no specific studies in those areas,” Bob Angwal, of the state’s fisheries division at New Paltz, told me. I got the impression his agency was operating on a theory: What’s to study when Catskill streams have good flows and an abundance of brown trout?

In Roscoe, the anecdotal testimonies I took during my casual November inquiry were not at all what I’d expected. Fishing in recent years had never been better, some locals were saying. Manny Zanger, president of the Beamoc Chapter of Trout Unlimited, reported that big rainbows were migrating up the Beaverkill from the Delaware River. Shaun Plunkett, proprietor of the Guest House, a creek-side inn, told me that last spring he’d hooked more big browns than at any time in a quarter-century wading the Willowemoc. And at the Roscoe Fly Shop, Dennis Skarka, a veteran Catskill fishing guide, said there have always been fluctuations between the high and low flows, the good catches and the bad. “What worries me isn’t a warming trend,” he said, “it’s the acid rain from those coal-burning power-plants in the Midwest.” Skarka paused reflectively, then added: “Of course, just because there’s no conclusive evidence right now that the streams or the fish are hurting doesn’t mean we won’t see a problem with climate sooner or later, somewhere down the road.”

A problem may already exist: changing patterns of precipitation. Zanger told me the Beamoc valley experienced “incredible” floods in 1996, in 2000 and as recently as last September. “The little tributaries are getting blown out,” he said. And John Magnuson of the Center for Limnology at the University of Wisconsin–Madison reported to me that faster runoff, as in the case of a flood, results in reduced percolation to the groundwater system, which in turn deprives a stream of cooler inflows during warm summer months.

I mentioned to Magnuson that in spite of the floods, the Willowemoc was serving up lots of big browns. Wasn’t that good news? “Not necessarily,” he said. “Browns can tolerate warmer water than rainbows and brook trout.” So the dominance of the browns could be a sign that global warming is cooking some of the nation’s best trout waters. As for the Willowemoc’s brookies, they appear to be surviving only in the creek’s highest and coolest headwaters.

There was a professional flytier in Roscoe who once told me that the trouble with bearers of bad news is that they always seem to be hung up on nostalgia for the good old days. Beware of that, he said. Stop trying to turn back to something that’s no longer there. He said, “We all want to do that. Me, I’d like to go out past St. Louis and watch the Indians sitting around on the banks of the Missouri. But I’ll never see that. The Indians are gone.”

I wonder what the descendants of that old flytier will think, somewhere down the road, of the good old days when big browns dimpled the Beamoc. Fifty years from now, will the browns have gone the way of the brookies? And what of the trout anglers? For want of any cold-water species, will they be gone too?

A recent study indicates that these eight species will lose a large portion of their U.S. habitat to global warming before the end of the century.

Percentage of Habitat Loss By 2090