A solitary hunter, the continent's only species of wolf may well be the most endangered canid in the world 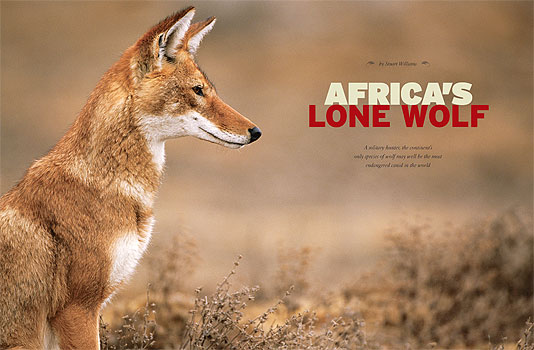 AS DAWN BREAKS on the plateau, I spot a wolf, coated in frost, lying curled against a tussock of grass, the early-morning sun glowing on her orange-red fur. The animal wakes, stretches and trots over to greet the other members of her pack. As usual, their greetings are noisy and busy, reinforcing the group's social order--subordinates greet dominants with tails between the legs, bowed backs and flattened ears. The wolves then move off together to patrol their territory, stopping to sniff or mark areas with urine. Once this job is complete, I lose sight of the pack as individuals break off to forage alone on rodents that scamper across the landscape.

These six wolves, all members of what we call the Darkeena pack, are among the last Ethiopian wolves on Earth. Charismatic predators endemic to alpine ecosystems of the Ethiopian highlands, only about 500 of the animals remain. Africa's sole species of wolf, Canis simensis is the rarest and most endangered wild canid on the continent.

The Darkeena pack inhabits the Web Valley of Bale Mountains National Park, which shelters Africa's largest remaining expanse of alpine ecosystem--and with it, more than half the global population of Ethiopian wolves. Elsewhere, wolf populations are scattered among six geographically isolated areas. In some of these, the animals are further subdivided into populations containing as few as 10 to 20 wolves.

Like all remaining Afroalpine habitat, the Web Valley is more than 11,483 feet above sea level, a mountain meadow filled with herbs and grass cropped short by cattle and sheep brought in to graze by Oromo pastoral people. Spongy underfoot, the ground is littered with hundreds of holes that provide homes for giant mole-rats, Blick's grass rats and other rodents. Incredibly, the biomass of these rodents matches that of large ungulates in the Serengeti-Mara ecosystem of Kenya and Tanzania, making the valley one of the best remaining habitats for Ethiopian wolves. 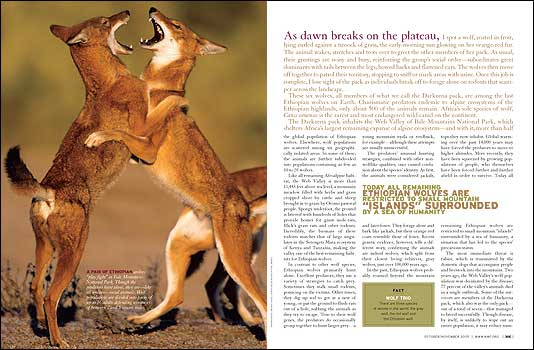 In contrast to other wolf species, Ethiopian wolves primarily hunt alone. Excellent predators, they use a variety of strategies to catch prey. Sometimes they stalk small rodents, pouncing on the victims. Other times, they dig up soil to get at a nest of young, or pat the ground to flush rats out of a hole, nabbing the animals as they try to escape. True to their wolf genes, the predators do occasionally group together to hunt larger prey--a young mountain nyala or reedbuck, for example--although these attempts are usually unsuccessful.

The predators' unusual hunting strategies, combined with other non-wolflike qualities, once caused confusion about the species' identity. At first, the animals were considered jackals, and later foxes: They forage alone and bark like jackals, but their orange-red coats resemble those of foxes. Recent genetic evidence, however, tells a different story, confirming the animals are indeed wolves, which split from their closest living relatives, gray wolves, just over 100,000 years ago.

In the past, Ethiopian wolves probably roamed beyond the mountain tops they now inhabit. Global warming over the past 14,000 years may have forced the predators to move to higher altitudes. More recently, they have been squeezed by growing populations of people, who themselves have been forced further and further afield in order to survive. Today all remaining Ethiopian wolves are restricted to small mountain "islands" surrounded by a sea of humanity, a situation that has led to the species' precarious status.

The most immediate threat is rabies, which is transmitted by the domestic dogs that accompany people and livestock into the mountains. Two years ago, the Web Valley's wolf population was decimated by the disease; 77 percent of the valley's animals died in a single outbreak. Some of the survivors are members of the Darkeena pack, which also was the only pack--out of a total of seven--that managed to breed successfully. Though disease, by itself, is unlikely to wipe out an entire population, it may reduce numbers to such low levels that it cannot recover.

In addition, dogs introduce the risk of hybridization, which occurs when male dogs mate with female wolves. The wolves are closely related enough to dogs that hybrid pups are fertile. If these hybrids remain in the population, the dog genes will spread, undermining the wolves' genetic integrity.

Livestock itself can be a risk. During much of the year, grazing sheep and cattle--assuming the role of wild ungulates killed off over the past 40 years--play a positive role by maintaining the meadows short enough to favor high rodent densities. But in the rainy season, these regular livestock inhabitants are joined by thousands more that are moved up the mountains to keep them away from sprouting crops in the lowlands. When this happens, sheep and cattle begin to compete with rodents for food, suppressing populations of the wolves' prey. 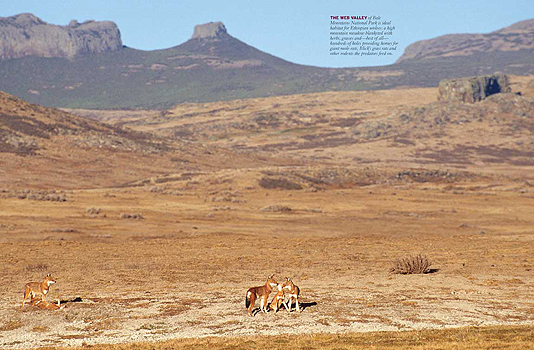 Ethiopian wolves are also susceptible to inbreeding and other problems associated with small populations. The species now has the lowest genetic diversity of any carnivore in the world. In addition to genetic problems, small populations are vulnerable to chance events. If a population of ten wolves, for example, produces two successive litters in which only male pups survive, it would become predominantly male and no longer be viable.

In an effort to combat such threats, the Ethiopian Wolf Conservation Programme (EWCP) was established in 1995. An offshoot of Oxford University's Wildlife Conservation Research Unit, the program targets all wolf ranges in Ethiopia, thanks largely to a five-year pledge of funding from the United Kingdom's Born Free Foundation. For the past five years, I've served as EWCP's coordinator.

Our program relies on more than a decade of wolf research, converting scientific findings into conservation action. An analysis of two rabies outbreaks (1991 and 2003–2004), for example, told us that the disease poses the most immediate threat to the Ethiopian wolf. Now we are examining different strategies to prevent rabies, from house-to-house rabies vaccinations where dog densities are highest to the possibility of using oral vaccines in the field to protect wolf populations directly.

In addition to direct conservation action, we are working to safeguard the wolf's rapidly vanishing habitat, both through the existing network of national parks and by lobbying the Ethiopian government to protect additional areas of alpine ecosystem at present, only two out of seven wolf ranges are officially protected. We are also trying to promote international tourism to the region, so that the people of Ethiopia benefit and thus consider the wolves and their habitat valuable. To meet this goal, we are raising money to build a tourism infrastructure--trekking huts, for example--train local guides and publish guidebooks to the region.

Conservation education is also critical, so EWCP runs campaigns in local communities that target both adults and children. Our mission is to increase awareness of the Afroalpine ecosystem--the resources it provides and what would happen if these resources were overexploited. In addition, we stress the value of wildlife, not only for generating income through tourism but also as a matter of national pride. We stress that the Ethiopian wolf is a species found nowhere else on Earth but in their country.

Today, though threats facing the wolves remain daunting, we see signs of hope. Despite recent disease outbreaks, wolf populations in at least five out of seven ranges are increasing. What puts that good news in perspective, however, is that the animals are, and will always be, surrounded by a surging tide of humanity--one whose population is expected to at least double over the next two decades.

Stuart Williams is a biologist who has worked on conservation issues in Africa for the past decade. Since 2000, he has been coordinator of the Ethiopian Wolf Conservation Programme, based in the Bale Mountains of Ethiopia. For more information on the organization's work, go to www.ethiopianwolf.org.