How to Brighten Your Garden with Orioles

Chances are at least one species ranges in your region during part of the year; here are some tips for attracting the colorful birds 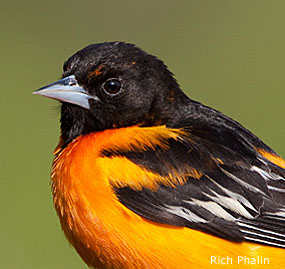 TUCKED into a mixed commercial and residential neighborhood near downtown Pharr, Texas, Allen Williams’ backyard demonstrates that you can attract orioles just about anywhere. His lush garden is a long way from the nearest woods, but on a sweltering, early-spring morning, a female Baltimore oriole is splashing in his birdbath. An orchard oriole searches for insects high in a hackberry. Two Altamira orioles take turns feeding on grapefruit pieces in a mesquite tree.

Williams, who also sees hooded orioles on his property, believes the profuse native vegetation that now blankets the once nearly bare yard is the secret to his success. Both migrating orioles and residents seek out his habitat, which has more than 20 species of trees, 40 types of shrubs and a thick layer of ground cover.

Not everyone, of course, can lure four kinds of orioles. But by planning ahead and adding the right plants to their yards—plus a few other enticements—most homeowners should be able to convince some of the birds to stop by once warmer weather sets in.

Almost anywhere you live in the lower 48 states, at least one species of oriole spends part of the year near you. Baltimore and orchard orioles live throughout most of the East and Midwest. Bullock’s and Scott’s orioles summer in western states. Hooded orioles range from California to Texas. Two other species, Altamira and Audubon’s, sometimes cross the border from Mexico into the Rio Grande Valley.

Planting fruiting trees or shrubs is a good way to get started attracting these colorful birds. For instance, says Nancy Flood, an oriole expert and lecturer at The University College of the Cariboo in British Colombia, “Serviceberries attract orioles.” About a dozen of these small trees or shrubs are native to the United States and southern Canada. Most bear dark purple fruits in early summer.

The eastern serviceberry, also called shadbush or juneberry, is a common understory tree in many hardwood forests that adapts well to gardens and yards. Western, or Saskatoon, serviceberry, native from the Great Plains to the Pacific Coast, is another good option; so are downy and Utah serviceberries.

Wild cherries, including a widespread shrub called chokecherry, are recommended by Nancy Coverstone, an associate professor at the University of Maine Cooperative Extension Service. She also suggests pin cherry, primarily a northern tree, and black cherry, which grows from Nova Scotia west to Minnesota and south to Florida, and in parts of New Mexico and Arizona.

If you don’t have the space or inclination for fruiting plants, try nectar-rich flowers. Like hummingbirds, orioles feed on nectar. But the bigger birds cannot hover, so they need plants that will support their weight while they drink. In the Southwest, ocotillo and agave work well. Elsewhere, select flowering vines, including native honeysuckles, cross vines or trumpet creepers.

You can also appeal to an oriole’s sweet tooth by putting out commercial sugar-water feeders. Make the sweet syrup by boiling a half cup of white sugar in 2 cups of water until it dissolves. Be certain to change the liquid and clean the feeders every two to three days. Citrus, especially oranges and grapefruit, will also tempt most orioles. Another draw for orioles is a good nesting tree. In the past, Baltimore orioles raised their young mostly in elms, but today they may also use the more common maples, sycamores and willows. Hooded orioles in Texas, says Williams, look for Washingtonia and sabal palms. Scott’s orioles, another Southwest species, frequently use the fibers of yucca and agave, as well as dogbane stems, to build their nests.

Nesting materials made by humans may coax orioles into your yard as well. Every spring, Coverstone cuts twine into four-inch lengths, unravels them and drapes the fibers across the bushes not far from her deck. Over the next few weeks, she watches female orioles fly off with the strands in their bills.

According to Coverstone, you should avoid pesticides if you want to attract orioles. “Most of their diet consists of insects,” she explains. “That’s what they feed their young.” For pest control, she advises landscaping with a variety of native plants, which often are more resistant to infestations. Once spraying is stopped, the number of beneficial insects (those that prey on other bugs) will also build up in your garden. In fact, bringing your backyard habitat into balance with the natural world may be the best thing you can do to welcome orioles as neighbors.

Doreen Cubie wrote about wild mink in the December/January 2005 issue of National Wildlife . Find out how you can turn your garden into a Certified Wildlife Habitat.

Jamming With Orioles
Orioles love grape jelly and many people feed it to them. But does this highly processed food harm the birds? “Jelly is bad only if it is left out too long,” says oriole expert Nancy Flood. “Bacterial populations can build up.” She encourages people to replace the jelly every day or two and clean the feeder thoroughly, using a mixture of one part liquid bleach to nine parts warm water.