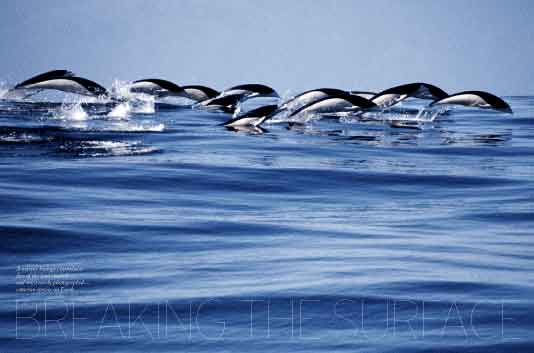 SAY THE WORD “DOLPHIN” and most people picture Flipper, that endearing bottlenose dolphin made famous by the popular 1960s television show. With their bulbous foreheads, sleek gray bodies, sharklike dorsal fins and jaw lines that seem set in perpetual smiles, bottlenose dolphins are recognized worldwide. Since the early 1900s, their intelligence, adaptability and willingness to perform have made the animals popular attractions at aquariums and the subject of many scientific studies.

But how many people have heard of—let alone seen—a Commerson’s dolphin, Heaviside’s dolphin or southern right whale dolphin? These are just 3 of approximately 40 dolphin species on the planet. Dolphins inhabit all of the world’s oceans, from the poles to the equator, and some are even found in freshwater habitats.

Like all toothed whales (a group of 71 cetacean species that also includes porpoises and several whales), every kind of dolphin has teeth and a fluid-filled swelling on the forehead called a melon. Yet when it comes to appearance, size, social behavior, feeding habits, and habitat preferences, each dolphin species is unique. The smallest is the 5-foot-long Hector’s dolphin, found only in waters off the coast of New Zealand. The largest—so big that it’s known as a whale—is the orca, or killer whale, which is 30 feet long and a denizen of all oceans. 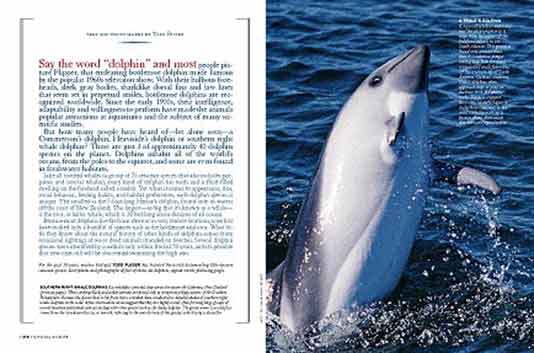 Because most dolphins live far from shore or in very remote locations, scientists have studied only a handful of species such as the bottlenose and orca. What little they know about the natural history of other kinds of dolphins comes from occasional sightings at sea or dead animals stranded on beaches. Several dolphin species were identified by scientists only within the last 50 years, and it’s possible that new ones still will be discovered swimming the high seas.

For the past 10 years, marine biologist Todd Pusser has traveled the world documenting little-known cetacean species; descriptions of five of them, all dolphins, appear here.

SOUTHERN RIGHT WHALE DOLPHIN (Lissodelphis peronii): This striking black-and-white animal is found only in temperate pelagic waters of the Southern Hemisphere. Because the species lives so far from shore, scientists have conducted no detailed studies of southern right whale dolphins in the wild. A few observations at sea suggest that they are highly social, often forming large groups of several hundred individuals and associating with other species such as the dusky dolphin. The genus name Lissodelphis comes from the Greek word lissos, or smooth, referring to the smooth back of this species, which lacks a dorsal fin.

PEALE’S DOLPHIN (Lagenorhynchus australis):This species is found only around the Falkland Islands—where it forages among kelp beds for squid, octopus and small fish—and off the southern tip of South America. Curious creatures, Peale’s dolphins often approach ships to play on the bow or in the quarter wake. Because scientists have only recently begun to study these cetaceans in the wild, virtually nothing is known about their social structure and reproduction.

AMAZON RIVER DOLPHIN (Inia geoffrensis): Found only in the Amazon and Orinoco River Basins of South America, this is one of just four freshwater dolphin species. With its long beak, bulbous head, small beady eyes and low dorsal fin, this bizarre-looking creature is easy to distinguish from other dolphins. Its color ranges from dark gray to brilliant pink. Because of folklore associated with the species, many local people fear it. Worldwide, river dolphins are among the most endangered cetaceans. Some species, such as the Yangtze river dolphin, could become extinct in the next 20 years. 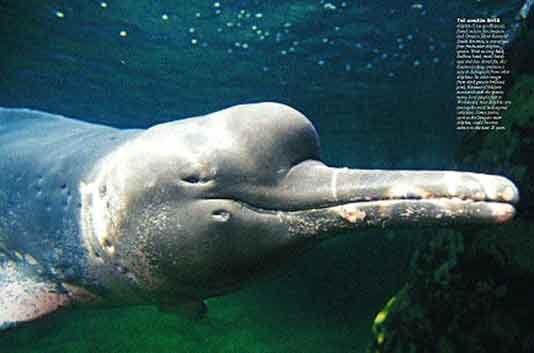 COMMERSON’S DOLPHIN (Cephalorhynchus commersonii): This boldly marked, black-and-white species is found only around the Falkland Islands and the southern tip of South America, with a small, isolated population off the Kergeulen Islands in the southern Indian Ocean. Among the smallest dolphins, reaching an adult length of only 5 feet, Commerson’s dolphins are social and curious, often approaching ships to play on the bow or “surfing” waves crashing into Falkland Island beaches. Though no population estimates exist for the species, its small range makes it vulnerable to entanglement in fishing gear such as gillnets and driftnets.

HEAVISIDE’S DOLPHIN (Cephalorhynchus heavisidii): This dolphin is among the least known cetacean species on Earth; even its appearance was not described in detail until 1988. Found only along the southwest coast of South Africa and Namibia, Heaviside’s also has one of the most restricted ranges of any dolphin. Based on observations at sea, biologists know the dolphins form groups of three to six animals that forage and socialize close to shore in early morning, moving offshore in the afternoon. The species’ name may come from “Haviside,” the name of a captain who in 1827 sold cetacean bones from South Africa in London.