Army ants have ruthlessly shaped the world's tropical forests for centuries, while teasing scientists with only small clues to their existence 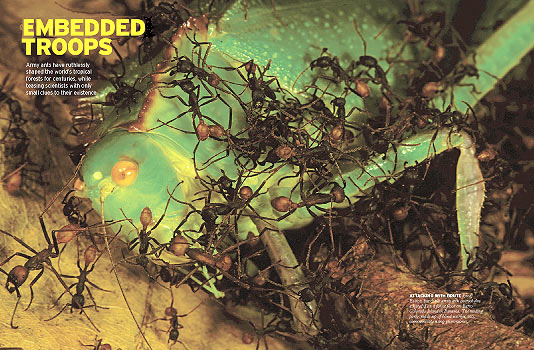 THE DEATH MARCH begins in the pale light just before sunrise as the female assassins stream from their temporary bastion concealed deep in a tropical thicket. Raucous birds peer down from the canopy, anticipating the drama that is about to unfold.

All at once, the cutthroats start running, converging to form a powerful front that takes down nearly every living creature in its path. This force of nature has been known to native peoples as padicours, tuocas, tepeguas and soldados. In English, it is the army ants—“the Huns and Tartars of the insect world,” wrote entomologist W.M. Wheeler in the early 1900s.

The highly aggressive tendencies of army ants have captivated scientists for centuries. Yet much about the ants remains a mystery. Roughly 150 species of army ants have been discovered in the New World alone, but the subterranean and nomadic nature of the majority of those ant species makes field research difficult. Clues to the ants’ ecology have only emerged because of the groundbreaking work of a few scientists who have spent countless hours tracking and observing army ants day and night in such places as Panama’s Barro Colorado Island, the living laboratory of the Smithsonian Tropical Research Institute.

One of these scientists is Carl Rettenmeyer, an emeritus professor at the University of Connecticut who is sometimes referred to as “the Pope of army ants.” At age 74, Rettenmeyer has been studying the curious insects since he was a field technician working in the early 1950s on Barro Colorado with biologist T.C. Schneirla, who had then been studying army ants for 20 years.

Located in the middle of the Panama Canal, Barro Colorado is home to a number of army ant species, including the above-ground foragers Eciton hamatum and E. burchelli, the infamous “swarm raider.” Rettenmeyer recalls being “mildly frightened” the first time he met burchelli. “It’s an intimidating sight to see hundreds of thousands of ants swarming on the ground around you,” he says. “And they run fast—faster than any other ants.” 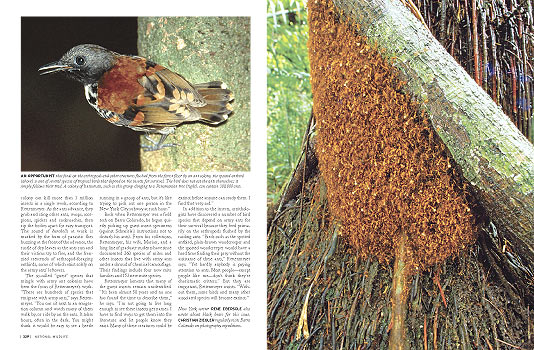 Rettenmeyer visited the island as recently as 2001 to amble out into the forest before dawn and secure a seat for burchelli’s early raid. The show—often illuminated by his headlamp—usually begins around 6 am, when the blind insects’ protective fortress, called a bivouac, magically jumps to life, partially dissolving into a charging mass of worker ants. “We don’t know what signals the ants to start pouring across the forest floor,” says Rettenmeyer. “It’s possible that they have an innate, biological clock. But it’s always quite uniformly around dawn.”

Rettenmeyer’s predecessor, Schneirla, discovered that the organized stampede that follows the bivouac’s breakup is driven by the ants’ primal need to feed the queen’s hungry brood of larvae—and therefore continue their 200-million-year march through time. Schneirla was the first to determine that army ants have migratory and stationary phases. “It’s an innate property of an army ant colony to have this rhythm,” says Rettenmeyer.

The colony’s stationary phase begins like clockwork every 35 days when the queen becomes pregnant. Enshrouded by the protective bivouac, a fortress formed from living worker ants’ linked bodies, the swollen queen lays between 50,000 and 150,000 eggs. Roughly one week later, those eggs begin to hatch, and simultaneously, the queen’s previous brood breaks out of their cocoons. The migratory phase then begins as the new worker ants join the raids and help to carry the next brood of larvae on nightly emigrations that last for two weeks.

The workers race along chemical trails that serve as signposts indicating how many feet to the next invasion, often a wasp or ant nest. Escorting the advancing workers are the defense forces: stockier workers, often known as soldiers, with large heads and long mandibles used for fending off anything—or anyone—that threatens the colony.

“The individual ants within the society are incredibly integrated and groups of them often appear to act like a single entity, or a superorganism,” says Scott Powell, a research associate at the United Kingdom’s University of Bristol who has also studied Barro Colorado’s army ants. The biggest burchelli colonies contain between 600,000 and 700,000 ants, and their main goal in life is to help the queen churn out more workers so that the colony continues to grow, and eventually splits. Only a handful of the researchers—including Schneirla, Rettenmeyer and most recently Powell—have reported witnessing the rare division of a burchelli colony. “It’s an incredible event to see,” says Powell. “The day of the split starts in an unusual way, with the colony sending out two swarms, instead of one, in opposite directions.” Later, five or six newly produced queens and the mother queen engage in a life-or-death race for monarchy. As the queens dash along the opposing trails, they are accompanied by large entourages of workers that periodically cover the large females, hindering their movement. After several hours of small advances, one queen on each trail emerges as the leader. When the winners finally reach the finish lines—their new bivouacs—the race is won. What is left of the original bivouac crumbles, the workers neatly divide themselves among the two new kingdoms, or “queendoms,” says Powell, and the losing queens are left behind to die, or to be eaten by predators.

The hunting style of burchelli is unusual among army ants. Most other species, including Barro Colorado’s hamatum, are “column raiders,” moving along narrow odor trails in a pattern that resembles the aerial view of a meandering river and its tributaries. As a swarm raider, burchelli forms a single, direct path that gradually fans out to form an advancing front made up of tens of thousands of ants.

Little escapes burchelli’s dragnet—a colony can kill more than 1 million insects in a single week, according to Rettenmeyer. As the ants advance, they grab and sting other ants, wasps, scorpions, spiders and cockroaches, then rip the bodies apart for easy transport. The sound of burchelli at work is marked by the hum of parasitic flies buzzing at the front of the advance, the rustle of dry leaves as the ants run and their victims try to flee, and the frenzied crescendo of arthropod-foraging antbirds, some of which exist solely on the army ants’ leftovers.

The so-called “guest” species that mingle with army ant colonies have been the focus of Rettenmeyer’s work. “There are hundreds of species that emigrate with army ants,” says Rettenmeyer. “You can sit next to an emigration column and watch many of them walk by, or ride by on the ants. It takes hours, often in the dark. You might think it would be easy to see a beetle running in a group of ants, but it’s like trying to pick out one person in the New York City subway at rush hour.”

Back when Rettenmeyer was a field tech on Barro Colorado, he began quietly picking up guest insect specimens (against Schneirla’s instructions not to disturb his ants). From his collections, Rettenmeyer, his wife, Marian, and a long line of graduate students have since documented 260 species of mites and other insects that live with army ants under a shroud of chemical camouflage. Their findings include four new mite families and 153 new mite species.

Rettenmeyer laments that many of the guest insects remain unidentified. “It’s been almost 50 years and no one has found the time to describe them,” he says. “I’m not going to live long enough to see these insects get names. I have to find ways to get them into the literature and let people know they exist. Many of these creatures could be extinct before anyone can study them. I find that very sad.” In addition to the insects, ornithologists have discovered a number of bird species that depend on army ants for their survival because they feed primarily on the arthropods flushed by the raiding ants. “Birds such as the spotted antbird, plain-brown woodcreeper and the spotted woodcreeper would have a hard time finding their prey without the assistance of these ants,” Rettenmeyer says. “Yet hardly anybody is paying attention to ants. Most people—except people like me—don’t think they’re charismatic critters.” But they are important, Rettenmeyer insists. “Without them, some birds and many other associated species will become extinct.”