High in an Ecuadorian cloud forest, the Andean cock-of-the-rock puts on one of the greatest shows on Earth 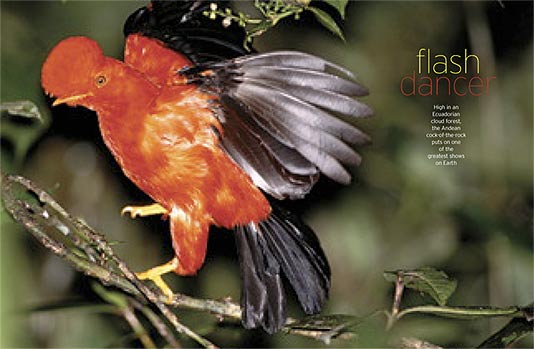 THE DAWN IS COOL, clammy and still as we wend our way up a steep and narrow valley in search of one of the most dazzling icons of the South American cloud forest: the Andean cock-of-the-rock. It’s been raining all night, as it often does at 5,000 feet above sea level in western Ecuador’s Mindo Valley. Now only a few strands of fog cling to the dark, tree-clad ramparts under a weak moonshine. Though the temperature is pleasant, the air is so supersaturated with moisture that by the time we reach our destination in the vine-laden forest I’m completely drenched in sweat.

We set up our cameras and wait, the suspense growing by the minute as the sky lightens. “You mustn’t worry,” assures local bird expert Vinicio Perez. “They always come.” But for the moment, it seems like it’s swarms of mosquitoes—the smallest and most bloodthirsty I’ve seen in a long time—not the birds, that he’s referring to.

Then, without warning, a loud, raucous kraaaah tears through the stillness, so close it sends chills down my spine. A clatter of wings in the mid-canopy confirms that the cock has landed only about 20 feet away.

Kraaaah, another bird swoops in from the right and settles even closer, almost at eye level in the crown of a sapling emerging from the slope below. To my amazement I discover that although the half light is too dim for the luscious foliage to show any color, the bird’s plumage is so brilliant it appears to glow like an orange flame.

In the next few minutes, a dozen or more male cock-of-the-rocks come streaking in like comets from the still-sleeping valley. Some chase each other around with exaggerated bluster, then each settles down to his own personal section of a particularly well developed, moss-spangled tree with a few saplings around it. What we’re witnessing is a classic lek: a site where as many as two or three dozen males congregate each morning to perform their spectacular courtship displays for visiting females. Each one holds a well-defined area a few feet across consisting of just three or four perches where he will practice his art to perfection, dancing, prancing and calling in his best effort to show off his splendor.

Kraaaah. Kraaaah. Kraaaah-kraaaah. The ardent males stare, look around, call some more, and wait. Then a smaller, drabber bird—a female—flies in and lands deep in the shadows. Compared to the spectacular foot-long males, she is slimmer, about two inches shorter and much duller with a dark tomato-paste hue instead of flame-orange plumage. 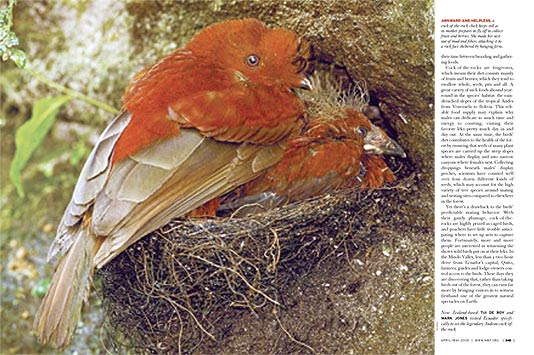 I lose sight of the new arrival, but the males spot her—and all hell breaks loose as each one gives all he’s got in hopes of outcompeting his rivals. The effect is almost deafening. The males hop up and down, flash their large, black-and-white wings, cock their heads and disklike crests from side to side, and scream at the top of their lungs.

The female hops a little closer to the performers, surveys the scene for awhile, then departs, leaving behind a disappointed silence until two more appear, and the frenzy begins again. The glorious show only dies down when the first rays of the sun crest the high ridge above the valley. Then, just as quickly as they appeared, the whole flock of expectant males disperses.

And with good reason. Female cock-of-the-rocks are not the only ones alerted by the rowdy show. Large forest eagles and boa constrictors can prey on males too distracted by courting to notice the threat. Half a dozen other raptors and even jaguars and ocelots also may be attracted. No doubt this is why the female’s color is much duller. Once mated, she will take care of building a nest and raising the chicks without any help from the flashy males.

A few weeks after watching the antics at the lek, another Mindo Valley resident, naturalist and photographer Murray Cooper, leads me to a deep, secluded canyon to see two cock-of-the-rock nests in a strictly protected private reserve. Each female has selected a smooth, shadowy rock face beneath hanging ferns a few feet above a clear trickling stream. Here the birds have carefully cemented small, cupped nests made of mud and fine fibers, cozy shelters for two gangly chicks. Though barely half grown, the chicks already show the first hint of deep red in their pinfeathers. Yet their perfect stillness made the birds almost unnoticeable even at close range. The mothers came and went surreptitiously, dividing their time between brooding and gathering foods.

Cock-of-the-rocks are frugivores, which means their diet consists mainly of fruits and berries, which they tend to swallow whole, seeds, pits and all. A great variety of such foods abound year-round in the species’ habitat: the rain-drenched slopes of the tropical Andes from Venezuela to Bolivia. This reliable food supply may explain why males can dedicate so much time and energy to courting, visiting their favorite leks pretty much day in and day out. At the same time, the birds’ diet contributes to the health of the forest by ensuring that seeds of many plant species are carried up the steep slopes where males display and into narrow canyons where females nest. Collecting droppings beneath males’ display perches, scientists have counted well over four dozen different kinds of seeds, which may account for the high variety of tree species around mating and nesting sites compared to elsewhere in the forest.

Yet there’s a drawback to the birds’ predictable mating behavior. With their gaudy plumage, cock-of-the-rocks are highly prized as caged birds, and poachers have little trouble anticipating where to set up nets to capture them.

Fortunately, more and more people are interested in witnessing the shows wild birds put on at their leks. In the Mindo Valley, less than a two-hour drive from Ecuador’s capital, Quito, farmers, guides and lodge owners control access to the birds. These days they are discovering that, rather than taking birds out of the forest, they can earn far more by bringing visitors in to witness firsthand one of the greatest natural spectacles on Earth.