In the Lair of the Giants 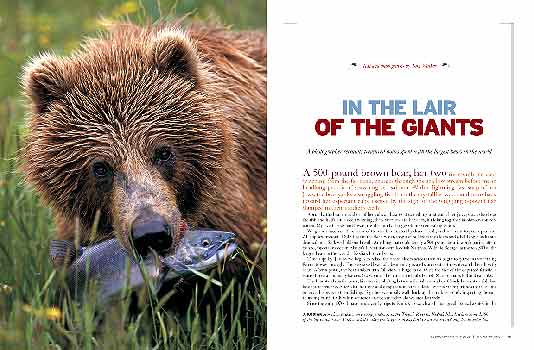 A 500-POUND brown bear, her two six-month-old cubs watching from the far bank, charges through the shallow stream before me in headlong pursuit of spawning red salmon. With a lightning fast snap of her jaws, the bear yanks a struggling fish from the crystalline water and turns back toward her expectant cubs, excited by the sight of the wriggling 6-pound fish clamped in their mother’s teeth.

Abruptly, the bear stops short of her cubs and stares at something upstream. Her jaws pop as she drops the fish and huffs out a deep warning, then races toward her cubs, huddling together in obvious consternation. My two friends and I watch as the family charges off into concealing brush.

We grow concerned. Our view of the creek is limited by dense brush, and we crane to peer upstream. All appears tranquil: Gulls float in the slack water, magpies call from the alders and a bald eagle picks at a dead salmon. Still, we hold our breath. Anything that could terrify a 500-pound bear is worth paying attention to, especially deep in Alaska’s 1.9-million-acre Kodiak National Wildlife Refuge, home to 2,300 of the largest bears in the world—Kodiak brown bears.

Time slips by. Just as we begin to relax, the dense alders across from us begin to quiver as something forces its way through. The keg-sized head of a bear emerges and stares out at the water and then directly at us. After a pause, the bear ambles into full view, a huge male, twice the size of the departed female, a scarred veteran of many battles. No wonder the female and cubs bolted. Mature males kill and eat cubs. 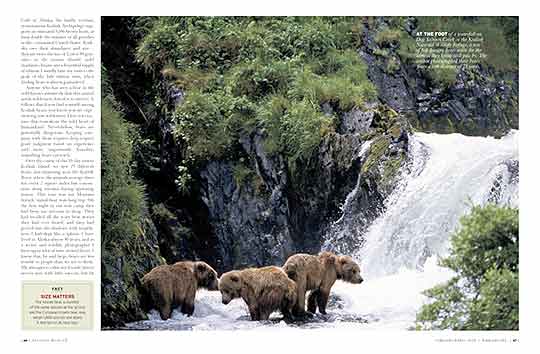 The bear stands on the bank, his attention shifting between the salmon and us. Clearly he wants to fish, but he does not trust us. After a bit, he turns and disappears into the alders. I whisper to my friends that it is time to leave the bears to their fishing. Together we noisily walk back up the trail, nervously inspecting the surrounding brush. Only when we reach an open meadow do we breathe freely.

Since the early 1970s, I have made yearly trips to Kodiak to watch and photograph bears. Located in the Gulf of Alaska, the lushly verdant, mountainous Kodiak Archipelago supports an estimated 3,000 brown bears, at least double the number of all grizzlies in the continental United States. Kodiaks owe their abundance and size—they are twice the size of Lower 48 grizzlies—to the remote islands’ mild maritime climate and a bountiful supply of salmon. I usually time my visits to the peak of the July salmon runs, when finding bears is almost guaranteed.

Anyone who has seen a bear in the wild knows intuitively that this animal needs wilderness, lots of it, to survive. It follows that if you find yourself among Kodiak bears, you know you are experiencing true wilderness. Here is a creature that reawakens the wild heart of humankind. Nevertheless, bears are potentially dangerous. Keeping company with them requires deep respect, good judgment based on experience and—most importantly—humility, something bears can teach.

Over the course of this 10-day visit to Kodiak Island, we saw 25 different bears, not surprising near the Karluk River, where the animals average three for every 2 square miles but concentrate along streams during spawning season. This tour was my Montana friends’ initial bear watching trip. On the first night in our tent camp they had been too nervous to sleep. They had recalled all the scary bear stories they had ever heard, and they had peered into the shadows with trepidation. I had slept like a sphinx. I have lived in Alaska almost 40 years, and as a writer and wildlife photographer I have spent a lot of time around bears. I know that, by and large, bears are less trouble to people than we are to them. My attempts to calm my friends’ jittery nerves met with little success, but by the end of the trip they had developed a new appreciation of bears and their role in the natural world.

On my first trip to Kodiak in the early 1970s, my attitude was not too different from that of my Montana friends. Despite a certain degree of apprehension, I had camped near an artificial fish pass on Dog Salmon River. The ladder, built in 1962, enabled the movement of red salmon upstream over a falls to a spawning lake.

I had heard that bears often congregated below the ladder and were accustomed to people, so I set up my camera on a slight promontory just above the falls and waited. I watched bald eagles swooping over the river and feeding on salmon, but throughout the first morning I saw no bears. In late afternoon the sun came out, and I dozed off. A sound in the brush startled me awake. I turned and saw a bear just yards away walking toward the falls. My pulse soared as I focused my camera. Excited as I was, the bear seemed unconcerned. In fact, it never even looked at me. 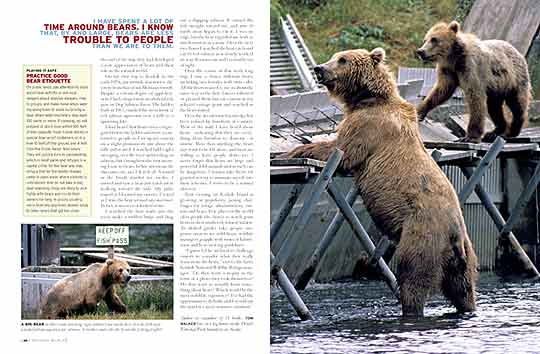 I watched the bear wade into the river, make a sudden lunge and drag out a flapping salmon. It carried the fish straight toward me, and just 20 yards away began to eat it. I was on edge, but the bear regarded me with as much interest as a stone. Over the next two hours I watched the bear catch and eat 10 red salmon as it slowly worked its way downstream and eventually out of sight.

Over the course of that week-long trip, I saw a dozen different bears, including two females with twin cubs. All the bears reacted to me in about the same way as the first. I never followed or pressed them but sat content at my selected vantage point and watched as the bears fished.

Over the decades my knowledge has been refined by hundreds of contacts. Most of the stuff I have heard about bears—indicating that they are everything from harmless to demonic—is untrue. More than anything else, bears just want to be left alone, and most are willing to leave people alone, too. I never forget that bears are large and powerful wild animals and as such can be dangerous. I neither take bears for granted nor try to insinuate myself into their activities. I strive to be a neutral observer.

“I guess I’d be inclined to challenge visitors to consider what they really want from the bears,” says Leslie Kerr, Kodiak National Wildlife Refuge manager. “Do they want a trophy in the form of a photo they took themselves? Do they want to actually learn something about bears? Which would be the most indelible experience? I’ve had the opportunity to do both, and I would say the mind is a more sensitive emulsion.”

Author or coauthor of 13 books, Tom Walker lives in a log home on the Denali National Park boundary in Alaska.

On public lands, pay attention to signs about bear activity or ask local rangers about possible dangers. Hike in groups, and make noise when walking along trails to avoid surprising a bear. When watching bears, stay back 100 yards or more. If camping, do not prepare or store food within 100 feet of the campsite. Food is best stored in special bear-proof containers or in a tree 10 feet off the ground and 4 feet from the trunk. Never feed bears. They will quickly turn to panhandling, which in most parks and refuges is a capital crime for the bear and may bring a fine for the feeder. Always camp in open areas where visibility is unhindered. And do not take a dog bear-watching. Dogs are likely to pick fights with bears and run to their owners for help. In grizzly country, carry federally approved pepper spray to deter bears that get too close.