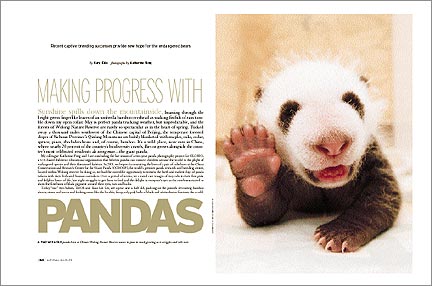 A TWO-WEEK-OLD panda born at China’s Wolong Nature Reserve waves its paw in mock greeting as it wriggles and rolls over.


SUNSHINE SPILLS down the mountainside, beaming through the bright green fingerlike leaves of an umbrella bamboo overhead as soaking fistfuls of rain tumble down my open collar. May is perfect panda tracking weather, but unpredictable, and the forests of Wolong Nature Reserve are rarely so spectacular as in the heart of spring. Tucked away a thousand miles southwest of the Chinese capital of Beijing, the temperate forested slopes of Sichuan Province’s Qinling Mountains are lushly blanketed with maples, oaks, cedar, spruce, pines, rhododendrons and, of course, bamboo. It’s a wild place, now rare in China, where nearly 20 percent of the country’s biodiversity crawls, flies or grows alongside the country’s most celebrated residents: da xiong mao—the giant panda.

My colleague Katherine Feng and I are concluding the last season of a two-year panda photography project for GLOBIO, a U.S.-based children’s educational organization that believes pandas can connect children around the world to the plight of endangered species and their threatened habitats. In 2001, we began documenting the lives of a pair of cubs born at the China Conservation and Research Center for the Giant Panda (CCRCGP), the world’s premier panda research and breeding center, located within Wolong reserve. In doing so, we had the incredible opportunity to witness the birth and earliest days of panda infants with their dedicated human caretakers. Over a period of weeks, we created rare images of tiny cubs in their first pink and helpless hours of life, late night struggles to get them to feed and the delight in everyone’s eyes as the newborns started to show the first hints of black pigment around their eyes, ears and backs. 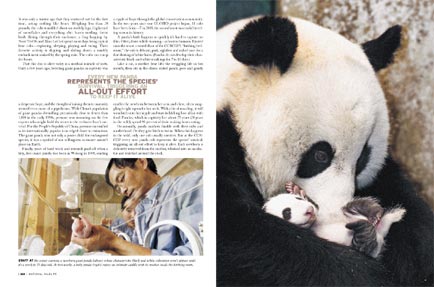 STAFF AT THE CENTER examine a newborn giant panda (left) whose characteristic black-and-white coloration won’t appear until it’s a week to 10 days old. At two weeks, a baby panda (right) enjoys an intimate cuddle with its mother inside the birthing room.


Today "our" two babies, TeeOh and Xiao Lei Lei, are a year and a half old, packing on the pounds devouring bamboo shoots, stems and leaves and looking more like the lovable, furry, roly-poly balls of black and white that so fascinate the world. It was only a winter ago that they ventured out for the first time, acting nothing like bears. Weighing less than 20 pounds, the cubs stumbled about on wobbly legs, frightened of snowflakes and everything else: leaves rustling, forest birds flitting through their enclosure, a frog hopping by. Now TeeOh and Xiao Lei Lei spend most days being typical bear cubs—exploring, sleeping, playing and eating. Their favorite activity is slipping and sliding down a muddy embankment soaked by the spring rain. The cubs can romp for hours.

That this duo is alive today is a medical miracle of sorts. Only a few years ago, breeding giant pandas in captivity was a desperate hope, and the thought of raising them to maturity seemed even more of a pipedream. With China’s population of giant pandas dwindling precariously close to fewer than 1,000 in the early 1990s, pressure was mounting on the few experts who might hold the secret to the reclusive bear’s survival. For the People’s Republic of China, pressure intensified as its internationally popular icon edged closer to extinction. The giant panda was not only a poster child for endangered species, it was a symbol of our willingness to ensure nature’s place on Earth. 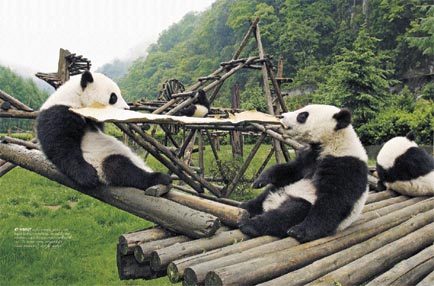 AT ABOUT EIGHT MONTHS, panda cubs begin testing everything, including one another—and the occasional cardboard box. "It creates some wonderfully comic moments," says the author.


Finally, years of hard work and research paid off when a tiny, five-ounce panda was born in Wolong in 1998, sending a ripple of hope through the global conservation community. In the two years since our GLOBIO project began, 11 cubs have been born—7 in 2003, the second most successful breeding season in history.

A panda’s birth happens so quickly it’s hard to capture on film. Often, there is little warning—at least to humans. Ejected onto the straw covered floor of the CCRCGP’s "birthing bedroom," the cub is delicate, pink, sightless and naked save for a fine dusting of white hairs. (Pandas do not develop their characteristic black-and-white markings for 7 to 10 days.)

Like a cat, a mother bear lifts the wriggling life in her mouth, then sits in the classic seated panda pose and gently cradles the newborn between her arm and chest, often snuggling it tight up under her neck. With a bit of nuzzling, it will soon latch onto her nipple and start its lifelong love affair with food: Pandas, which in captivity live about 25 years (20 years in the wild), spend 90 percent of their waking hours eating. 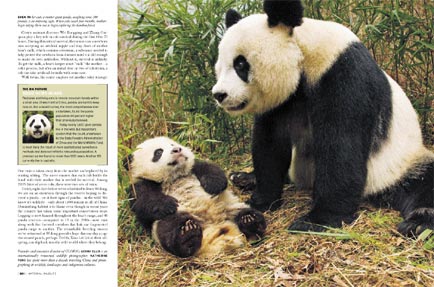 EVEN TO HER CUB, a mother giant panda, weighing some 200 pounds, is an imposing sight. When cubs reach four months, mothers begin taking them out to begin exploring the bamboo forest.


Occasionally, panda mothers fumble with their cubs and motherhood. Or they give birth to twins. When this happens in the wild, only one cub usually survives. But at the CCRCGP every new panda cub represents the species’ survival, triggering an all-out effort to keep it alive. Each newborn is delicately removed from the mother, whisked into an incubator and watched around the clock. Center assistant directors Wei Rongping and Zhang Guiquan play a key role in cub survival during the first 48 to 72 hours. During this critical interval, they must coax a newborn into accepting an artificial nipple and tiny doses of mother bear’s milk, which contains colostrum, a substance needed to help protect the newborn from diseases until it is old enough to make its own antibodies. Without it, survival is unlikely. To get the milk—a bear’s keeper must "milk" the mother—a risky process, but after an initial dose or two of colostrum, a cub can take artificial formula with some ease.

Reclusive and living only in remote mountain forests within a small area of west-central China, pandas are hard to keep tabs on. But a recent survey, the most comprehensive ever undertaken, found the panda population 40 percent higher than previously believed. Today nearly 1,600 giant pandas live in the wild. But researchers caution that the count, undertaken by the State Forestry Administration of China and the World Wildlife Fund, is most likely the result of more sophisticated surveillance methods and does not reflect a rebounding population. A previous survey found no more than 1,100 bears. Another 161 currently live in captivity.


With twins, the center employs yet another risky strategy: One twin is taken away from the mother and replaced by its waiting sibling. The move ensures that each cub builds the bond with their mother that is needed for survival. Among 2003’s litter of seven cubs, there were two sets of twins.

Today, eight days before we’re scheduled to leave Wolong, we are on an excursion through the reserve hoping to discover a panda—or at least signs of pandas—in the wild. We know it’s unlikely—only about 1,600 remain in all of China. Diminishing habitat is to blame even though in recent years the country has taken some important conservation steps: Logging is now banned throughout the bear’s range, and 40 panda reserves—compared to 13 in the 1980s—now exist along with five forested corridors that link one fragmented panda range to another. The remarkable breeding success we’ve witnessed at Wolong provides hope that one day a captive-reared panda, perhaps TeeOh, Xiao Lei Lei or their offspring, can slip back into the wild world where they belong.

Founder and executive director of GLOBIO, Gerry Ellis is an internationally renowned wildlife photographer. Katherine Feng has spent more than a decade traveling China and photographing its wildlife, landscapes and indigenous cultures.