New research reveals the poison is more deadly to wildlife than previously thought, affecting forest songbirds and other species that do not eat fish (Updated 5/20/2011)


BIOLOGIST DAVE EVERS had a simple goal when he took blood samples from three Bicknell's thrushes during a camping trip to Maine in 1998: to determine whether airborne mercury collecting on northeastern mountains was also contaminating the region's songbirds. Until then, scientists had not considered forest songbirds candidates for mercury poisoning.

Evers' suspicion was confirmed when the tests came back positive. He contacted Kent McFarland and Chris Rimmer, biologists with the Vermont Institute of Natural Science who for nine years had been studying Bicknell's thrushes on Mount Mansfield, the state's highest peak. Taking blood samples from the birds in 2000, McFarland and Rimmer also discovered mercury. "We knew we were onto something," says Evers, executive director of the Biodiversity Research Institute in Gorham, Maine.

Over the next four years, the three scientists collaborated with Canadian researchers to test more than 200 Bicknell's thrushes and 3 other songbird species across 21 mountains in New York, Vermont, New Hampshire, Maine, Québec, Nova Scotia, Newfoundland and New Brunswick, along with several spots in the birds' Caribbean wintering grounds. Their results not only documented widespread mercury contamination in the songbirds, it also raised concerns about the deadly neurotoxin's ability to enter food webs and harm wildlife in previously unknown ways.

ALARMING RESULTS
The study was part of a special report on mercury published in the April 2005 issue of Ecotoxicology, which included 21 papers from 71 scientists. In addition to the songbird findings, the report documented that large, fish-eating species like the common loon contain more mercury than any other birds. And loons in the Northeast show the highest mercury levels of all.

Another alarming result was the discovery of high mercury levels in northern waterthrushes, songbirds that feed on insects along rivers and wetlands. According to Catherine Bowes, NWF's Northeast mercury program manager, the new findings "confirm our growing fears that mercury is affecting far more wildlife species than we previously thought."

In addition, the report identified for the first time nine "biological hotspots" (see list below) in the U.S. Northeast and eastern Canada: areas where mercury levels are so high that they are harming certain wildlife species. Seven of the hotspots are located far from power plants, suggesting that airborne mercury is drifting in from elsewhere.

The report came out, coincidentally, just as the Bush administration announced weak mercury emissions standards for coal-fired power plants, the leading U.S. emitter of atmospheric mercury. While states such as Massachusetts and New Hampshire are toughening their rules for the pollutant, the administration's new regulations will delay national mercury reductions for several decades. Charging that the new rules violate the Clean Air Act--which requires the Environmental Protection Agency to set the most stringent standards possible for toxic pollutants--California, Connecticut, Maine, New Jersey, New Hampshire, New Mexico, New York, Vermont, Pennsylvania and Wisconsin all filed lawsuits shortly after they were announced.

Mercury has long been deemed a public health threat. Ingested when people eat fish from contaminated waters, it is lethal at high doses. At lower doses, mercury is especially dangerous to children, because it harms the development and function of the central nervous system. According to the Centers for Disease Control and Prevention, one in six U.S. women of childbearing age have unsafe levels of mercury in their bodies for a developing fetus, and 45 states warn pregnant women to limit fish consumption from their waters.

In nature, it is also well known that mercury often ends up in fish and their predators, such as loons and eagles. Washed into rivers, lakes and streams, inorganic mercury transforms into its toxic form, methylmercury, then moves up the aquatic food chain, from microbes and aquatic insects to small fish to larger fish to waterbirds and fish-eating mammals such as mink and otter. Every step of the way, the poison concentrates, a process called biomagnification.

On dry land, however, mercury was believed to remain locked in its harmless inorganic state. When McFarland and Rimmer told colleagues their plan to sample forest songbirds for the toxin, they were told they'd most likely find nothing.

DOUBLE WHAMMY
Atmospheric scientists previously had documented inorganic mercury's buildup in water, soil and trees on northeastern mountains. Carried by trade winds, smokestack mercury drifts across the East and falls in highest concentrations on mountaintops, where cloud and fog cover trap the pollutant.

To test for the toxic form of mercury in the region's wildlife, the researchers focused on Bicknell's thrush because it breeds exclusively in the gnarled conifer forests of northeastern mountains. Due to its restricted breeding range and deforestation in its Caribbean wintering grounds, fewer than 50,000 of the thrushes are believed to exist, making it one of the Northeast's species of highest conservation concern. Difficult to spot, the secretive olive brown bird was only declared a new species in 1995. 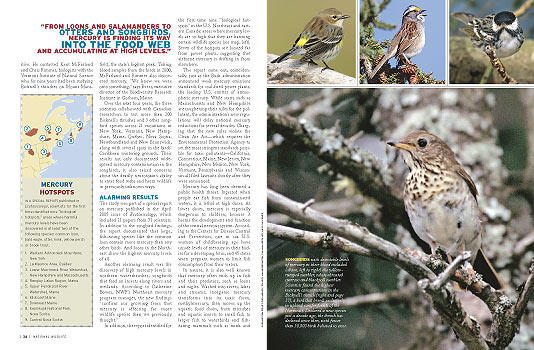 The biologists found mercury in all four bird species, yet Bicknell's thrush showed the highest concentrations. The scientists speculate the birds ingest mercury when feeding on insects, which pick up the toxin from eating even smaller bugs and vegetation. Precisely how the inorganic mercury transforms into toxic methylmercury in the mountains remains a mystery. Evers speculates that acid rain--a problem across the Northeast--helps create conditions that promote the transformation.

For songbirds already stressed by habitat loss, he says, mercury may be one more nail in the coffin. A few years ago, researchers discovered that acid rain is stripping mountains of calcium the birds need to produce eggs. Calcium depletion combined with mercury poisoning may result in a "double whammy," Evers says. "Those two stressors combined could be one reason why we are seeing declining songbird populations."

GLOBAL PROBLEM
Evers suspects scientists will discover additional mercury hotspots in the Appalachian Mountains of Pennsylvania, Virginia and West Virginia--which lie downwind of a corridor of power plants in the Ohio River Valley--where he plans to test birds in the future. Mercury is a global problem, he emphasizes. Some of it may fall quickly to land after being released by smokestacks, but a portion remains in the atmosphere for long periods of time, circling the globe and falling to earth in rain and snow far from its source. Although U.S. emissions have declined from sources such as waste incinerators in recent years, coal-fired power plants remain a large source of emissions nationally. Meanwhile, global releases are rising as more coal-fired plants are built to feed an energy-hungry world.

That's bad news for wildlife. "From loons and salamanders to otters and songbirds, mercury is finding its way into the food web and accumulating at high levels," says NWF policy analyst Felice Stadler. "Wildlife is truly on the front lines of the mercury contamination problem, and this new research makes a compelling case for reducing mercury pollution today." 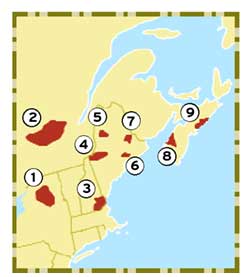 In a special report published in Ecotoxicology, scientists for the first time identified nine "biological hotspots," areas where harmful mercury levels have been discovered in at least two of the following species: common loon, bald eagle, otter, mink, yellow perch or brook trout.

Unlike recent songbird discoveries, mercury's harmful impact on human health has long been accepted. The neurotoxin--which builds up, or bioaccumulates, in the body over time--poses a particular threat to children and developing fetuses. By damaging the brain and central nervous system, mercury's effects can range from delays in the development of fine motor skills to poor verbal memory and lowered IQ.

And scientists still are uncovering new ways that mercury can harm humans. Three years ago, for example, researchers from Johns Hopkins University reported in the New England Journal of Medicine that high mercury levels are correlated with an increased risk of heart attacks in adult men. Other studies have suggested a link between mercury and male infertility.

Mercury may even be damaging the economy. A report published last February in Environmental Health Perspectives found that lowered intelligence in children exposed to mercury before birth is costing the U.S. economy $8.7 billion a year in lost productivity.

Through its Clean the Rain campaign, NWF is working to protect people and wildlife from mercury pollution. With staff in the Great Lakes, New England and Washington, D.C., the campaign educates the public on mercury risks; promotes state and local policies to reduce emissions; and has played a lead role in successfully convincing the federal government to regulate mercury release from coal-fired power plants nationally, an accomplishment now under threat by actions of the current administration.

Scientists have known for years that mercury interferes with the development of children's brains. Some women of childbearing age already limit their consumption of tuna and other large fish because of high mercury content (larger fish have longer life spans, which means more time to accumulate mercury in their bodies). A new study of 135 babies and their mothers gives pregnant women an even stronger reason to avoid those fish. Harvard University researchers found that for each increase of one part per million (ppm) of mercury in a pregnant woman's body, her baby's score on a cognitive test dropped by 7.5 points. That one ppm of mercury could be explained by a single weekly serving of swordfish or shark or a few servings of albacore tuna.

But the study also held good news for seafood-loving mothers-to-be. Mothers who consumed extra servings of fish--any fish--boosted their babies' cognitive scores by 4 points per weekly serving. The highest scores were found in babies whose mothers ate more fish but had lower levels of mercury in the body. That could mean that those babies' mothers were eating mostly small, low-mercury fish such as herring, sardines and tilapia.

Here are some suggestions from the Food and Drug Administration on which fish should be avoided by moms-to-be--and which fish should be embraced. Remember: Mercury concentrations in fish can vary widely by location, so check with your local health department to see which locally caught fish are safest.

Fish to seek out:

Fish to limit to once a week:

Tuna
Salmon (low in mercury, high in other contaminants)

For a list of the mercury levels of these and other fish, go to the FDA Mercury Levels in Commercial Fish and Shellfish site.--Hannah Schardt

May 20, 2011 UPDATE: First published in the August/September 2005 issue of National Wildlife, this article remains relevant today--perhaps even more so as the U.S. Environmental Protection Agency (EPA) considers whether to limit the mercury pollution that comes from power plants. Help NWF convince EPA to protect birds and other wildlife from mercury poisoning.