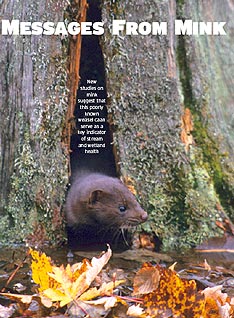 BIOLOGIST JACK WHITMAN was counting mink along the boulder-strewn coast of southeastern Alaska one summer about ten years ago when one of the 2-pound predators bounded into his small skiff. Although startled, Whitman managed to watch quietly as the animal launched a little study of its own, rummaging through the boat and Whitman’s backpack. The mink even gnawed a mitten. "It didn’t seem to mind that a person was nearby," says Whitman, who works for the Alaska Department of Fish and Game. "It was so close it was practically touching me."

During more than 25 years of study, Whitman has come to one definite conclusion about mink: "They’re fearless." Highly inquisitive, they sometimes follow hikers down trails just for a better look.

You may encounter mink almost anywhere in North America—only the southwestern deserts and high Arctic tundra lack them. These members of the weasel family—which also includes otters, martens, skunks, fishers, wolverines and badgers—are seldom far from water. In a Michigan survey, researchers never saw mink more than 100 feet from the water’s edge. One Quebec investigator discovered the majority of mink activity in his study took place within 10 feet of streams. 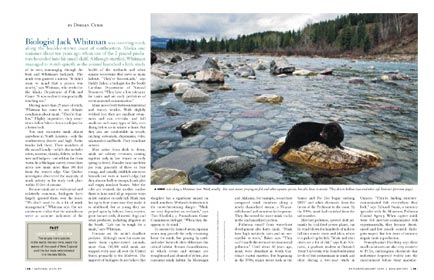 Because mink are so widespread and relatively common, biologists have largely ignored them over the years. "We don’t need to do a lot of mink management," Whitman says. But scientists now realize that the animals can serve as accurate indicators of the health of the wetlands and other aquatic ecosystems that serve as mink habitat. "They’re biosentinels," says Buddy Baker, a biologist for the South Carolina Department of Natural Resources. "They have a low tolerance for toxics and are early predictors of environmental contamination."

Mink move freely between terrestrial and watery worlds. With slightly webbed feet, they are excellent swimmers and can overtake and kill muskrats and many types of fish, even diving below ice in winter to hunt. But they also are comfortable in woods, catching cottontails, chipmunks, voles, salamanders and birds. They even hunt in trees.

Most active from dusk to dawn, mink are solitary creatures, coming together only in late winter or early spring to breed. Females raise one litter per year, generally of three or four young, and usually establish nurseries beneath tree roots at water’s edge, but they also use hollow stumps, brush piles and empty muskrat houses. After the cubs are weaned, the mother teaches them to hunt until all go separate ways in late summer or early fall. Mink may live up to four years once they make it to adulthood, but as young they are preyed upon by bobcats, foxes, coyotes, great horned owls, domestic dogs and other predators, including alligators in the South. "Life can be tough for a mink," says Whitman.

Fact
Lost Mink Species
The largest mink species in the world, the sea mink, swam the waters off the coast of New England until the fur trade exterminated it in the late 1800s.

Humans are the mink’s deadliest predator. Although most fur coats are made from captive-raised animals, more than 100,000 wild mink are trapped every year all over the United States, primarily in the Midwest. The majority of biologists do not believe this slaughter has a significant impact on mink numbers. Wetlands destruction is the most-threatening danger. "Mink are very dependent on wetlands," says Tom Hardisky, a Pennsylvania Game Commission biologist "When they disappear, so do mink."

In intensively farmed areas, riparian zones may provide the only remaining home for mink, but grazing by cattle and other livestock often obliterates this critical habitat. Stream channelization, in which rivers and streams are straightened and cleaned of debris, also consumes mink habitat. In Mississippi and Alabama, for example, researchers compared mink numbers along a newly channelized stream, a 55-year-old channel and an untouched segment. They discovered far more mink tracks in the unchannelized portion.

Pollution runoff from waterfront development also hurts mink. "Mink have high metabolic rates and are susceptible to stress," Baker says. "They can’t handle the stress of environmental pollution." Until about 60 years ago, mink were abundant in South Carolina’s coastal marshes. But beginning in the 1940s, major rivers such as the Santee and Pee Dee began carrying DDT and other chemicals from the farms of the Piedmont to the coast. By the 1960s, mink had vanished from the salt marshes. 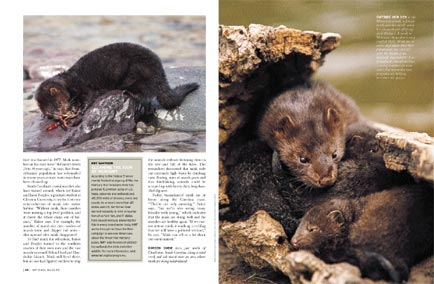 Mercury pollution, spewed aloft primarily by coal-fired power plants, can be wind-blown for hundreds of miles to fall into remote rivers and lakes, where it is picked up by fish. "Mink and river otters eat a lot of fish," says Kate Klenavic, a graduate student at Ontario’s Trent University who found substantial levels of this contaminant in mink and otter during a two-year study in Ontario. "They’re finding mercury-contaminated fish everywhere they look," says Edward Swain, a mercury specialist with the Minnesota Pollution Control Agency. When captive mink were fed mercury-contaminated fish experimentally, they became disoriented and lost muscle control. Biologists suspect that low doses of mercury impair mink reproduction.

Pennsylvania’s Hardisky says these small carnivores are also very sensitive to PCBs, carcinogenic chemicals that industries dispersed widely into the environment before their manufacture was banned in 1977. Mink numbers in his state were "definitely down 20 to 30 years ago," he says. But Pennsylvania’s population has rebounded in recent years as state waterways have been cleaned up.

South Carolina’s coastal marshes also have turned around, which led Baker and Jason Peeples, a graduate student at Clemson University, to try the first-ever reintroduction of mink into native habitat. "Without mink, these marshes were missing a top-level predator, and it threw the whole chain out of balance," Baker says. For example, the number of marsh rice rats—raiders of marsh wren and clapper rail nests—shot upward after mink disappeared.

To find mink for relocation, Baker and Peeples turned to the southern reaches of their own state and the vast marshes around Hilton Head and Daufuskie Islands. Mink still lived there, but no one had figured out how to trap the animals without drowning them in the rise and fall of the tides. The researchers discovered that mink rode out extremely high water by climbing onto floating mats of marsh grass and that hitchhiking animals could be scooped up with heavy-duty, long-handled dip nets.

Today, transplanted mink are at home along the Carolina coast. "They’re not only surviving," Baker says, "but we’re also seeing many females with young," which indicates that the mink are doing well and the marshes are healthy again. "If we cannot restore mink, it sends up a red flag that we still have a polluted wetland," he says. "Mink can tell us a lot about our environment."

Doreen Cubie lives just north of Charleston, South Carolina, along a tidal creek and salt marsh near an area where mink are being reintroduced.