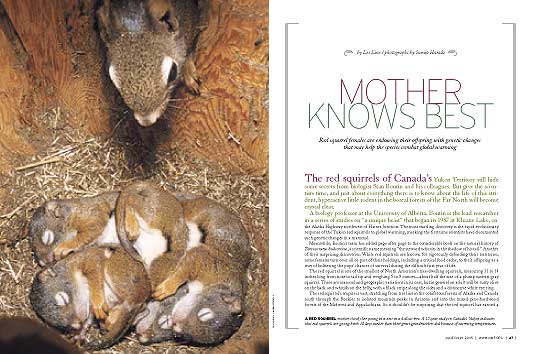 The red squirrels of Canada’s Yukon Territory still hide some secrets from biologist Stan Boutin and his colleagues. But give the scientists time, and just about everything there is to know about the life of this strident, hyperactive little rodent in the boreal forests of the Far North will become crystal clear.

A biology professor at the University of Alberta, Boutin is the lead researcher in a series of studies on "a unique beast" that began in 1987 at Kluane Lake, on the Alaska Highway northwest of Haines Junction. The most startling discovery is the rapid evolutionary response of the Yukon red squirrels to global warming, marking the first time scientists have documented such genetic changes in a mammal.

Meanwhile, Boutin’s team has added page after page to the considerable book on the natural history of Tamiasciurus hudsonicus, a scientific name meaning "the steward who sits in the shadow of his tail." Another of their surprising discoveries: While red squirrels are known for vigorously defending their territories, some females turn over all or part of their holdings, including a critical food cache, to their offspring as a way of bolstering the pups’ chances of survival during the difficult first year of life.

The red squirrel is one of the smallest of North American’s tree-dwelling squirrels, measuring 11 to 14 inches long from nose to tail tip and weighing 5 to 9 ounces—about half the size of a plump eastern gray squirrel. There are seasonal and geographic variations in its coat, but in general an adult will be rusty olive on the back and whitish on the belly, with a black stripe along the sides and a distinctive white eye ring.

The red squirrel’s empire is vast, stretching from tree line in the coniferous forests of Alaska and Canada south through the Rockies to isolated mountain peaks in Arizona and into the mixed pine-hardwood forests of the Midwest and Appalachians. So it shouldn’t be surprising that the red squirrel has earned a handful of colloquial names, among them piney, barking squirrel, mountain boomer and chickaree, after its scolding chiree-ree alarm call. 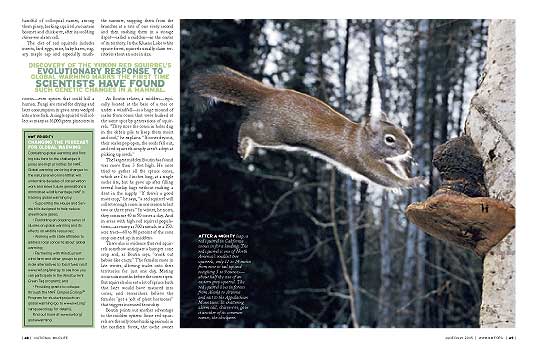 The diet of red squirrels includes insects, bird eggs, mice, baby hares, sugary maple sap and especially mushrooms—even species that could kill a human. Fungi are stored for drying and later consumption in grass nests wedged into a tree fork. A single squirrel will collect as many as 16,000 green pinecones in the summer, snipping them from the branches at a rate of one every second and then stashing them in a storage depot—called a midden—in the center of its territory. In the Kluane Lake white spruce forest, squirrels usually claim territories about an acre in size.

As Boutin relates, a midden—typically located at the base of a tree or under a windfall—is a huge mound of scales from cones that were husked at the same spot by generations of squirrels. "They store the cones in holes dug in the debris pile to keep them moist and cool," he explains. "If cones dry out, their scales pop open, the seeds fall out, and red squirrels simply aren’t adept at picking up seeds."

The largest midden Boutin has found was more than 3 feet high. He once tried to gather all the spruce cones, which are 2 to 3 inches long, at a single cache site, but he gave up after filling several burlap bags without making a dent in the supply. "If there’s a good mast crop," he says, "a red squirrel will collect enough cones in one season to last two or three years." In winter, he notes, they consume 40 to 50 cones a day. And in areas with high red squirrel populations—as many as 700 animals in a 250-acre tract—60 to 80 percent of the cone crop can end up in middens.

There also is evidence that red squirrels somehow anticipate a bumper cone crop and, as Boutin says, "crank out babies like crazy." The females mate in late winter, allowing males onto their territories for just one day. Mating occurs six months before the cones ripen. But squirrels also eat a lot of spruce buds that later would have matured into cones, and researchers believe the females "get a jolt of plant hormones" that triggers increased fecundity.

Boutin points out another advantage to the midden system: Since red squirrels are the only cone-husking animals in the northern forest, the cache owner burns up energy defending its food supply only when another squirrel invades its territory. Indeed, the Kluane Lake squirrels spend less than 1 percent of their time protecting their turf. Those encounters, however, are certainly strident and visual affairs, as described on the Yukon Department of Environment’s red squirrel webpage: "When a twig snaps in the squirrel’s domain, it goes on defense, barking out a series of challenging ‘chuck-chucks’ punctuated by emphatic body jerks and tail flicks. If the intruder moves closer, the squirrel bursts into a frenzied chatter, feet stamping and body quivering with aggression. If trespassers are neighboring squirrels, territory owners may chase them out . . . the rest is purely and loudly vocal."

That’s why biologists working at Kluane Lake were puzzled when females ceased their incessant chattering and disappeared from their territories around the time their young were ready for independence. The missing mothers, they discovered, had moved to vacant middens in the neighborhood, bequeathing their precious cone hoards to one of their offspring. Scientists interpret this behavior as a form of parental care to ensure that family genes are passed along to new generations. Immature squirrels, Boutin relates, are unable to compete with adults for middens and are at high risk of being killed by predators when they leave their natal home. On the other hand, a squirrel claiming its own territory might live more than six years.

The big news from the Yukon that recently made a splash in science circles, however, was a 10-year study showing that female red squirrels are giving birth 18 days earlier than their great-grandmothers did. That change averages an astonishing six days per generation. The reason: warmer spring temperatures in the area—a rise of about 4 degrees F over the past three decades—along with a dramatic increase in pinecone abundance linked to a drier climate.

The researchers, who monitored 664 marked females, including 325 followed throughout their lifetimes, say that natural selection is clearly and rapidly at work among the Yukon’s red squirrels. Juveniles born early in the season—as early as the end of February, still the dead of winter in the Yukon—will be stronger and have less competition when it comes time to claim a territory left vacant by adult mortality the previous winter.

The burning question, Boutin says, is whether other Arctic animal and plant life can count on evolution to keep pace with the unprecedented rate of global warming in the Arctic. "The red squirrel study is cause for some optimism," the scientist says. But he stresses that Tamiasciurus, with its high genetic variability and short generation time, may be an exception in the genetic race with global warming, while longer-lived and more slowly reproducing species, such as the polar bear, will be unable to adapt to warming’s profound environmental transformations.

The deciduous woods around Field Editor Les Line’s home in New York’s Hudson Valley are full of gray squirrels, and he misses the chatter of chickarees.

NWF PRIORITY
Changing the Forecast for Global Warming
Combating global warming and finding solutions to the challenges it poses are high priorities for NWF. Global warming can bring changes to the natural environment that will undermine decades of conservation work and leave future generations a diminished wildlife heritage. NWF is tracking global warming by:

Supporting the House and Senate bills designed to help reduce greenhouse gases;
Publishing an ongoing series of studies on global warming and its effects on wildlife resources;
Working with state affiliates to address local concerns about global warming;
Find out more at www.nwf.org/globalwarming.