The survival of the European bison, extinct in the wild only 80 years ago, ranks as one of the major successes in the world of wildlife reintroductions 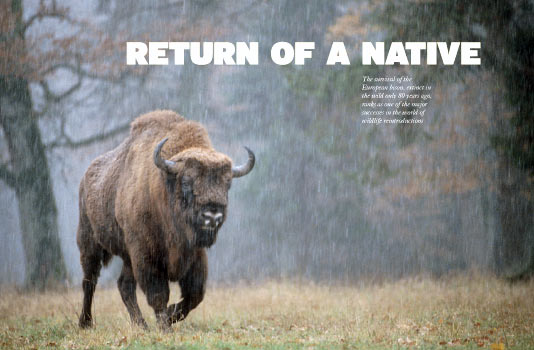 THE LAST REMNANT of the primeval forest that once cloaked Europe from the Atlantic Coast to Russia survives, oddly enough, in one of the industrialized world’s most polluted countries—Poland. More oddly still, this remnant of ancient forest shelters hundreds of native bison, a once-plentiful species that provided meat for prehistoric Europeans, as well as subject matter for primitive cave paintings, but that became extinct in the wild some 80 years ago.

The improbable comeback of the European bison marks one of the most dramatic success stories in the history of wildlife reintroductions. Small herds of the continent’s largest and heaviest native land animal now graze in wooded preserves in a handful of eastern European countries. But the bison of the pristine, old-growth Bialowieza (“bee-oh-veh-ja”) Primeval Forest, which straddles the Poland-Belarus border, are not simply surviving. They are flourishing.

The European bison, or wisent, shares ancestry with the slightly larger, slightly shaggier American plains bison, a separate species that migrated to North America via the Bering land bridge tens of thousands of years ago. “The European bison is a very charismatic species,” says Wanda Olech, a geneticist at Warsaw Agricultural University who heads the European bison specialist group of the IUCN–The World Conservation Union. “For people in Europe, it is a kind of icon.” Indeed, a visit to glimpse bison at Bialowieza National Park, which protects the best portion of Poland’s part of the forest, is a standard part of every Polish schoolchild’s education. Plans are afoot in Poland for a 130-mile designated bison trail to accommodate Europe’s many bison lovers.

Yet despite the European bison’s rebound in the wild from zero to more than 1,800 worldwide—with 1,200 more in zoos and captive-breeding centers—it remains an endangered species. Clouding its future are uncertainties about where it will live and whether it can stay healthy.

In ancient times, bison ranged from Scandinavia to the Mediterranean and from Britain to western Siberia. Gladiators fought captured bison in ancient Rome, though Pliny the Elder noticed that the beasts were more apt to flee humans than fight them. By the 15th century, hunting and human settlement had driven the animals to extinction across most of the continent. At the start of the 20th, the last of the bison’s lowland subspecies clung to survival deep in Bialowieza Forest, thanks to a quirk of history: The woodlands had been left virtually undisturbed for centuries so that Polish kings and, later, Russian tsars could hunt there. The last wild bison in the forest was shot by a poacher in 1919. The last free-ranging member of a second subspecies, the so-called mountain bison of Russia’s remote Caucasus region, died in 1927.

A campaign to restore European bison to Bialowieza, using the offspring of animals in zoos and private game preserves, began with Polish independence in the 1920s. The first successful release of a captive-bred European bison came in 1952. Much of the forest, which includes areas where tourists may travel only on foot, is now a national park. It is ideal bison habitat: a dense and unkempt mix of old-growth oak, pine, spruce, linden, ash and other trees. Dotted with sunlit bogs and clearings, the forest shelters a rich panoply of wildlife, from roe deer and wild boar to black storks and lesser spotted eagles. 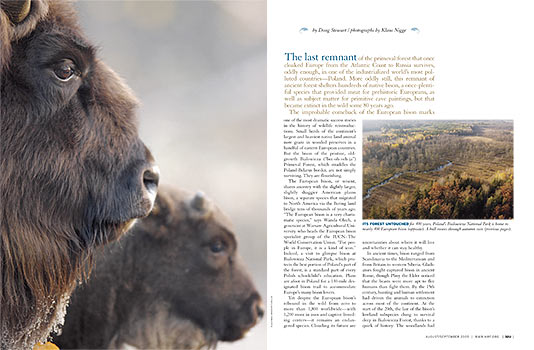 Despite their affinity for woodlands, European bison, like their American counterparts, are grazers. They do most of their feeding in the grassy clearings, then retreat into the woods for safety. Though they can measure 9 feet from nose to tail and more than 6 feet from hoof to hump, the bison disappear into the woods as completely as a meadow vole burrowing under grass. Their vanishing act serves little purpose today, as no natural predators lurk in the forest. “In the 19th century, Bialowieza Forest still had bears, which prey on bison, but they are no longer here,” says Katarzyna Daleszczyk, a bison expert at Poland’s Mammal Research Institute. “Now there are only lynxes and wolves, and their impact on bison is insignificant.”

European bison are gregarious, but not nearly as much as wildebeest or American bison, both fabled for their vista-filling herds. In Poland, the several hundred free-ranging bison at Bialowieza typically graze in herds of 20 or so, mostly cows, calves and juveniles. In winter, when temperatures can plunge to minus 36 degrees F, the small herds congregate into groups of 100 or more around feeding stations stocked with hay.

Young bulls spend much of the year in bachelor herds, while older, higher-status bulls mostly roam the forest solo. During the rut, from August to October, bulls attach themselves to the matriarchal herds. Dominant bulls control a harem of sorts and mate with as many cows as they can. Infrequently, mature bulls fight to establish dominance. “Mostly they push each other with their heads,” Daleszczyk says. “They stop occasionally to make threats—scratching the ground with their forelegs and sometimes crushing or uprooting small trees. Often the area where bison fight is devastated.” The loser usually turns tail after a few minutes, she says, but some battles end in fatal goring.

A more worrisome threat to the European bison’s well-being is inbreeding. “The Bialowieza bison are from the lowland line, which was derived from just seven animals, and we assume that those seven were not related, but it’s probably not true,” Olech says. In fact, she adds, every male in the lowland line carries an identical Y chromosome, the legacy of a long-gone bull named Plebejer. In Poland, Ukraine and Russia, a hybrid subspecies with genes from lowland and mountain bison has a bit more genetic variety, but not much. A lack of genetic diversity adds to a population’s risk of disease, infertility and other problems, yet so far the lowland European bison suffer no obvious problems. “The population is growing very well, and the animals are reproducing and healthy,” Olech says. “All the same, we are doing as much as possible to protect the gene pool and avoid closely related animals mating.” For captive Bialowieza bison, biologists play matchmaker using a pedigree book. Wild bison pick their own mates, of course.

Wildlife managers at the Polish national park maintain the bison population, free-ranging and captive, at just under 400 animals, which is all there is room for on the preserve’s 150,000 acres. Surplus animals are sold or donated to other preserves or to zoos, in Poland and elsewhere. A few are released into hunting preserves, where well-heeled hunters pay thousands of dollars for the privilege of bagging a single past-its-prime bull.

Nearly as many bison roam the woods on the Belarus side of the border, which cover about 220,000 acres. In 1980, with the rise of Poland’s Solidarity Movement chilling relations with the Soviet Union, the Soviets erected a fence bisecting the forest along what was then the Polish-Soviet border, now the Polish-Belarussian border. The fence has had the unintended effect of keeping the populations of lowland bison on each side from mixing and mating. “We hope it will be removed, because that would be better for the future of the animals living here,” Daleszczyk says.

In addition to Poland and Belarus, small herds of European bison roam forested pockets of a half dozen other eastern European countries. “Everybody is getting into the act of trying to establish free-ranging herds of bison,” says wildlife biologist Peter Gogan, an American bison specialist at Montana State University. “Unfortunately, there’s not a whole heck of a lot of land for them in Eastern Europe.” Many of the programs are aiming for a herd size of 100 animals. Most populations to date are a fraction of that size.

Gogan and others believe a free-ranging bison herd should number at least 1,000 to be self-sustaining. “In the Russian part of the original range of this species, they do have plenty of land for bison,” Gogan says. “They’re hoping to establish two herds of 1,000 animals there.”

Wanda Olech says the bigger the breeding populations, the safer the species. “But even if some herds are quite small, we can coordinate breeding between them, just to increase the numbers. That’s why we are trying to create as many herds as possible. We have 3,000 animals in the species now. Our target is to have at least twice as many. That is still a small number, but we would be happy to have that many. Then we will see about the next step.”