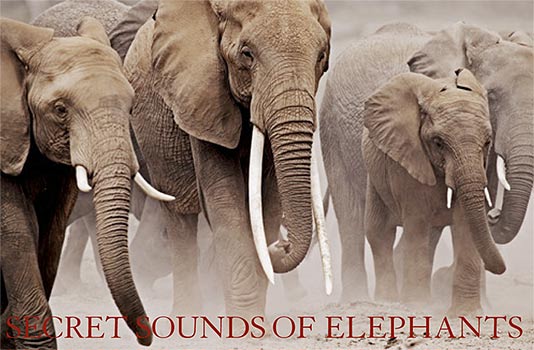 ON A WARM, typically cloudless July afternoon in Namibia’s Etosha National Park, ecologist Caitlin O’Connell-Rodwell scans the horizon for elephants. She is sitting with Katie Eckert, a University of California at Davis veterinary student, in the upper level of a two-story observation tower set up at Mushara water hole, a freshwater spring where elephants, giraffes, lions and many other species gather day and night to drink or bathe during the dry season. Serving as command central for a four-week experiment, the upper level is a solar-powered headquarters crammed with laptops, cameras, cables and recorders.

Peering through binoculars, the duo spots four male elephants on the horizon. The bulls head straight for the water hole and begin splashing and spraying. Suddenly, and for no apparent reason, the four males step away from the water and freeze, as if posing for a group shot. O’Connell-Rodwell is particularly intrigued by one bull. Unlike the others, trunks frozen in midair, this bull has placed his trunk flat on the ground, the tip pointing inward toward his front feet. After several seconds the spell is broken, and the bulls amble back to the water hole.

Synchronized freezing is common even among herds of 20 or more elephants. Remaining motionless seems to enable the animals to focus their keen senses of smell and hearing on unfamiliar noises and odors in the air. But O’Connell-Rodwell believes they could be responding to sensations coming from the ground as well. “Bulls often lay their trunks on the ground when freezing,” she says. “We think they may be using them as tools to detect vibrations in the earth.”

A postdoctoral fellow at Stanford University, O’Connell-Rodwell has come to Namibia’s premiere wildlife sanctuary to explore the mysterious and complex world of elephant communication. She and her colleagues are part of a scientific revolution that began nearly two decades ago with the stunning revelation that elephants communicate over long distances using low-frequency sounds, also called infrasounds, that are too deep to be heard by most humans. In 1997, O’Connell-Rodwell took this discovery in a bold new direction by proposing that low-frequency calls also generate powerful ground vibrations. 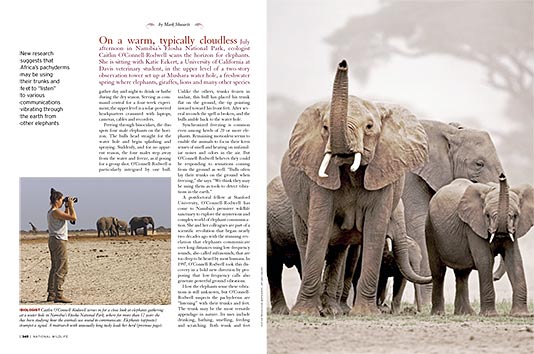 How the elephants sense these vibrations is still unknown, but O’Connell-Rodwell suspects the pachyderms are “listening” with their trunks and feet. The trunk may be the most versatile appendage in nature. Its uses include drinking, bathing, smelling, feeding and scratching. Both trunk and feet contain two kinds of pressure-sensitive nerve endings—one that detects infrasonic vibrations and another that responds to vibrations with slightly higher frequencies.

Scientists have long known that seismic communication is common in small animals, including spiders, scorpions, insects and a number of vertebrate species such as white-lipped frogs, blind mole rats, kangaroo rats and golden moles. They also have found evidence of seismic sensitivity in elephant seals—2-ton marine mammals that are not related to elephants. But O’Connell-Rodwell was the first to suggest that a large land animal also is sending and receiving seismic messages. These messages may not be deliberate transmissions, she says, but rather the by-products of intense low-frequency sounds produced when elephants run, charge and vocalize. “Perhaps they’re sending out signals to potential mates far away,” she says. “Or maybe they can tell if a predator is in the vicinity by picking up seismic cues from a distressed herd.”

Good Vibrations
In the mid-1980s, scientists Katy Payne, Joyce Poole and their colleagues discovered that elephants communicate with a variety of infrasounds. Several years later, environmental scientist David Larom and coworkers proposed that, under ideal atmospheric conditions, low-frequency calls could travel six miles or more through the air.

O’Connell-Rodwell began studying elephants at Etosha National Park in 1992. In July 2003, she returned with husband Tim Rodwell and four other researchers to oversee the most sophisticated seismic experiment to date. “I started doing research here on elephants for the Namibian Ministry of Wildlife and Tourism,” O’Connell-Rodwell recalls. “I was looking for ways to help farmers keep elephants away from their crops. I wanted to see if there was something about elephant behavior, particularly their vocalizations, that we could use as a deterrent.”

Having just earned a graduate degree in entomology at the University of Hawaii at Manoa, O’Connell-Rodwell noticed something about the freezing behavior of Etosha’s six-ton bulls that reminded her of the tiny insects back in her lab. “I did my masters thesis on seismic communication in planthoppers,” she says. “I’d put a male planthopper on a stem and play back a female call, and the male would do the same thing the elephants were doing: He would freeze, then press down on his legs, go forward a little bit, then freeze again. It was just so fascinating to me, and it’s what got me to think, maybe there’s something else going on other than acoustic communication.”

Scientists have determined that an elephant’s ability to communicate over long distances is essential for its survival, particularly in a place like Etosha, where more than 2,400 savanna elephants range over an area larger than New Jersey. The difficulty of finding a mate in this vast wilderness is compounded by elephant reproductive biology. Females breed only when in estrus—a period of sexual arousal that occurs every two years and lasts just a few days. “Females in estrus make these very low, long calls that bulls home in on, because it’s such a rare event,” O’Connell-Rodwell says. These powerful estrus calls carry more than two miles in the air and may be accompanied by long-distance seismic signals, she adds.

Breeding herds also use low-frequency vocalizations to warn of predators. Adult bulls and cows have no enemies, except for humans, but young elephants are susceptible to attacks by lions and hyenas. When a predator appears, older members of the herd emit intense warning calls that prompt the rest of the herd to clump together for protection, then flee.

In 1994, O’Connell-Rodwell recorded the dramatic cries of a breeding herd threatened by lions at Mushara. “The elephants got really scared, and the matriarch made these very powerful warning calls, and then the herd took off screaming and trumpeting,” she recalls. “Since then, every time we’ve played that particular call at the water hole, we get the same response—the elephants take off.” 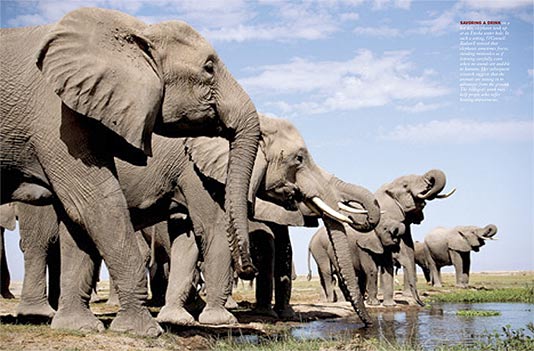 Underground Warnings
Reacting to a warning call played in the air is one thing, but could the elephants detect calls transmitted only through the ground?

To find out, the research team in 2002 devised an experiment using electronic equipment that allowed them to send signals through the ground at Mushara. Every time a herd showed up, O’Connell-Rodwell would play a tape of the 1994 warning call as a seismic vibration. To make sure the elephants were feeling the calls and not hearing them, microphones were installed above ground so researchers could monitor all low-frequency sounds in the air. “The results of our 2002 study showed us that elephants do indeed detect warning calls played through the ground,” O’Connell-Rodwell observes. “We expected them to clump up into tight groups and leave the area, and that’s in fact what they did. But since we only played back one type of call, we couldn’t really say whether they were interpreting it correctly. Maybe they thought it was a vehicle or something strange instead of a predator warning.”

An experiment last year was designed to solve that problem by using three different recordings—the 1994 warning call from Mushara, an anti-predator call recorded by scientist Joyce Poole in Kenya and an artificial warble tone.

Although still analyzing data from this experiment, O’Connell-Rodwell is able to make a few preliminary observations: “The data I’ve seen so far suggest that the elephants were responding like I had expected. When the ’94 warning call was played back, they tended to clump together and leave the water hole sooner. But what’s really interesting is that the unfamiliar anti-predator call from Kenya also caused them to clump up, get nervous and aggressively rumble—but they didn’t necessarily leave. I didn’t think it was going to be that clear cut.”

Meanwhile, other scientists have begun testing the seismic theory. Researchers with Katy Payne’s Elephant Listening Project recently found evidence that forest elephants in the Central African Republic can generate seismic signals that carry nearly 600 feet. However, O’Connell-Rodwell has conducted research with captive elephants which suggests that the animals may perceive signals from as far away as 2 miles.

Conservation Goals
Although still in its infancy, seismic research ultimately may have important applications for elephant conservation and even for human health. One goal of the 2004 Mushara experiment was to develop an electronic census technique using subterranean geophone arrays to count elephants and other animals. The research team discovered that the footfall of a large animal produces a unique signature visible on a spectrogram, making it easy to tell if an elephant, rhino or giraffe has walked by. “It’s a very exciting thing and very conservation oriented,” O’Connell-Rodwell says.

Human-generated noise is another area of concern. Scientists have found that rotating helicopter blades generate low-pitched noises, and possibly seismic vibrations, that can disrupt and frighten wild herds located far away. Based on this research, David Larom and others argue that the use of helicopters in areas inhabited by elephants should be carefully monitored and controlled.

O’Connell-Rodwell also is applying her insights in animal seismicity to the problem of hearing loss in humans. People with hearing impairments develop a much greater tactile sensitivity in the auditory cortex of their brains than do people with normal hearing. That finding inspired O’Connell-Rodwell to explore whether exposure to vibrational stimulation shortly after birth would improve hearing in babies with severe hearing loss, but results are not yet in. She and colleagues at the Stanford Medical School have launched a series of tests using brain scans to probe the tactile response of humans with hearing loss.

For O’Connell-Rodwell, the future of seismic research is boundless and unpredictable: “Our work is really at the interface of geophysics, neurophysiology and ecology,” she says. “We’re asking questions that no one has really dealt with before.”

Mark Shwartz has produced several environmental film documentaries, including a 1996 NWF film on the impact of gold mining in the American West.

As might be expected, the African elephant’s ability to sense seismic sound may begin in the ears. The hammer bone, or malleus, of the elephant’s inner ear is proportionally very large for a mammal, but typical for animals that use vibrational signals. It may therefore be a sign that elephants can communicate with seismic sounds. Also, the elephant and its relative the manatee are unique among mammals in having reverted to a reptilianlike cochlear structure in the inner ear. The cochlea of reptiles facilitates a keen sensitivity to vibrations and may do the same in elephants.

But other aspects of elephant anatomy also support that ability. First, their enormous bodies, which allow them to generate low-frequency sounds almost as powerful as those of a jet takeoff, provide ideal frames for receiving ground vibrations and conducting them to the inner ear. Second, the elephant’s toe bones rest on a fatty pad that might help focus vibrations from the ground into the bone. Finally, the elephant’s enormous brain lies in the cranial cavity behind the eyes in line with the auditory canal. The front of the skull is riddled with sinus cavities that may function as resonating chambers for vibrations from the ground.